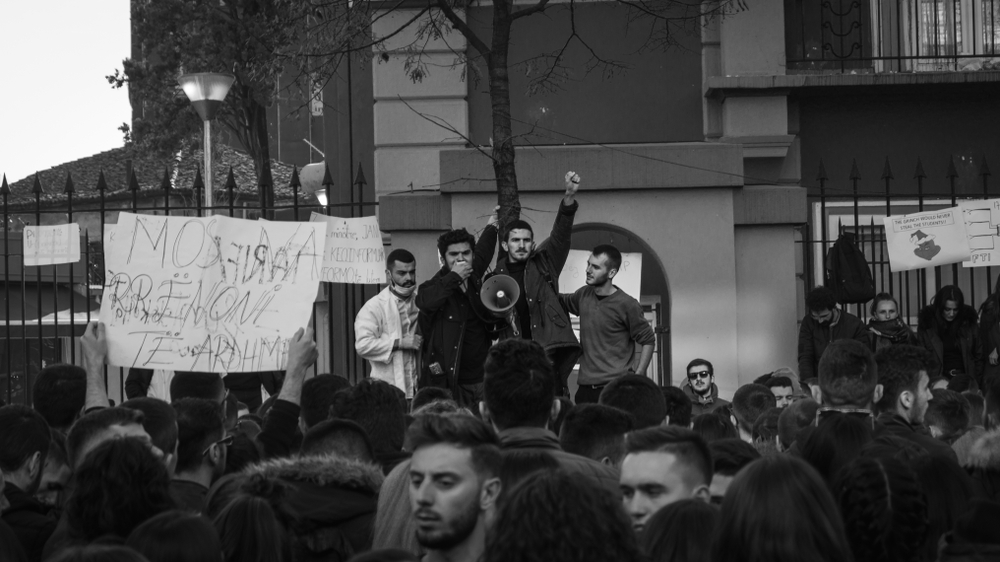 The increase of tuition fees, low quality of teaching, and lack of adequate infrastructures in public universities have led to widespread student protests in Tirana and other university towns in Albania

Under the slogan “When injustice becomes law, resistance becomes duty”, students of public universities are demonstrating in the centre of Tirana for the seventh consecutive day. The spark that lit the flame of protests was the adoption of a government’s decision obliging students to pay an additional fee of approximately 5 Euros per credit for the resit exams. On average, each exam has six to nine credits, for an extra cost of 30-45 Euros.

The boycott of classes started last Tuesday (4 December) at the Department of Urban Planning (University of Tirana) and propagated through a chain reaction in the other public universities. The first official reaction by the government was through the social media accounts of the Prime Minister Rama, who called the demonstrators ‘grade flunkers’. This allusion triggered students’ anger and disappointment in the government and the political class in general.

The current stalemate in the higher education system is an outcome of the major reform adopted by the government back in 2015, based on the Anglo-Saxon model (although Albania is not part of such tradition). One of the novelties of the reform was the introduction of a new competitive systemfor state funding that places public and private universities on equal footing, although the former lie in poor conditions. Currently in Albania there are 40 universities, including 16 public and 24 private. The University of Tirana is the oldest in the country and faces the worst difficulties in terms of technical infrastructure, libraries, and study halls as well as student dorms.

According to a recent publication by Albania’s Institute of Statistics, the largest increase in family expenses today is in education, +2.3% compared with the previous year. The average monthly income has decreased by 3% with respect to last year, amounting at 400 Euros per month. In the meantime, public expenses for education amount at 3.1% of GDP. In order to ‘survive’, public universities have opted for an increase in tuition fees, expansion of annual student quotas, and design of new higher education programmes (not always matching societal needs). A first sign of the financial difficulties of public universities came last February, when a faculty of the University of Tirana could not afford to pay the wages of the academic staff. The government intervened to unblock the situation, but failed to address the root cause.

Although the additional fee for the resit exams has already been abolished by the government, the students are continuing the protests, demanding a sustainable increase of the state budget for public universities, amendment of the law on higher education and scientific research, and improvement of the quality of education and general infrastructure as well as access to academic journals and fight against corruption practices of some professors. They underline the prerequisite to ‘treat’ education as a human right for all and not as a good for certain categories of society.

Repeatedly invited by Prime Minister Rama to elect a representative group for a government-students dialogue, demonstrators have firmly rejected the option fearing political interference. So far, there have been attempts by the opposition parties to take control of and use the students’ protests for their own purposes.

This wave of students’ protests coincides with the 28th anniversary of the 1990 protests that led to the fall of the communist dictatorship in Albania. Under the same motto, “We want Albania as the whole Europe”, these demonstrations have shaken up the younger generations and stirred hopes that things may change and there still exists the opportunity to build a brighter future in their own country. Messages of encouragement and support have been sent through social media from Albanian students living abroad – having in mind that a considerable percentage of youngsters have left the country in the past years. Moreover, constructive stances have been taken by academics, public personalities, and representatives of the Catholic Church.

The protests are expected to continue until the government undertakes the necessary measures to fulfill the students’ requests and another major demonstration is planned for today.