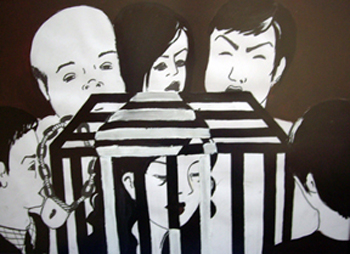 Recent data show a worrying rise in the phenomenon. The growing numbers may however be the reflection of increased awareness and the inclination to press charges. This analysis gives an overview of the current situation, from laws not being enforced to scarce state assistance

Domestic violence continues to be a serious problem in Albanian society with growing numbers of reported cases and victims. Most of the girl and women victims belong to the more disadvantaged social classes,have a lower standard of education and come from the rural areas. However, domestic violence is not confined to these social groups but regards the whole society regardless of the level of education or economic status.

Official data from the work ministry shows that 1,998 cases were registered in 2010 and 1,217 cases in 2009.Running alongside this rise in the number of cases reported is the development of activities working to guarantee protection for victims and developing prevention strategies.2010 saw 1,230 requests to the local courts for “Immediate protection/restrictive orders”compared to only 841 requests the year before.

On analysing the reported cases a recurrent factor has been revealed;that of one member of the family wanting to exercise their absolute power over the others. This usually concerns a husband's behaviour towards his wife or also parents' behaviour towards their children.

If talking about this phenomenon in Albania has become easier in these last few years it is also thanks to a national campaign set up in 2000 by a series of associations and community groups. It carried the slogan “Don't keep quiet”inviting public opinion to discuss the problem.

Since then other initiatives have followed even though it needs to be underlined that they have had more of an effect in urban areas. In more periphery areas, especially in the north of the country,domestic violence is still something which remains strictly within the family walls and is considered a private matter.

Regarding laws for protecting victims and preventing domestic violence, in 2006 Albania introduced a law on Measures for prevention of violence within families. This law was only passed in parliament following strong pressure from civilians including a petition signed by 20,000 people.

The law covers two important aspects. First of all it defines which public institutions are competent in dealing with domestic violence. Secondly it grants the magistracy the power to put “protective and restrictive measures”into action in favour of the victims and against the violators.

Regulations which are not applied

An effective application of this law remains a difficult hurdle to get over,starting from completing and drawing up the relevant laws and setting up a budget sufficient enough to put them into practice.

“It is a matter of fact that since the beginning of 2011 there have been more cases of women killed yet no guilty person in prison. This clearly shows that the law is not working. The system and network of help finds obstacles in its way when trying to apply the law, plus there are no shelters for victims where they can start to rebuild their lives.”Arbana explains.

As shown by both official statistics as well as data gathered by independent world associations,cases of violence are in fact on the increase. This could also be seen as not completely negative data if we think it could be because people are finally starting to report cases and the problem is at last coming out into the open. However, we still can not call this data reassuring.

From the information we can see that the violence comes in different forms:the emotional kind,the economical kind(particularly in urban areas),the physical kind(particularly in rural areas)and the sexual kind which is the most hidden form. The age groups which suffer most violence are girls and women between the ages of 18and 23 years and between 37 and 45 years. The most vulnerable out of all the victims are those with disabilities, migrants, the Roma and women originally from rural areas.

The State fails to exist

Despite this difficult situation the representatives of the communities hope that in the near future they are able to collaborate more effectively with the state institutions in order to confront this domestic violence problem together. They particularly hope for an improved cooperation with the police department responsible for helping in the fight against domestic violence and responsible for the protection of minors.