Albanian Media: many, not plural 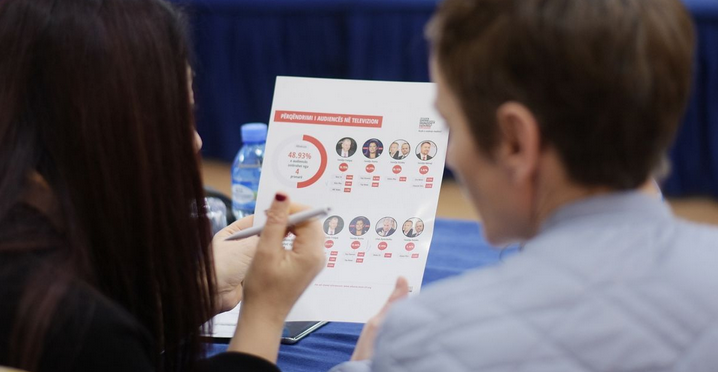 While Albania’s media scene is often described as having many problems – the presence of many outlets in the market has often been welcomed as a guarantee of a wide variety of views.

However, a new report on media ownership and pluralism, published this week in Tirana by Reporters Without Borders and BIRN Albania, shows the perception of the market as vibrant and diverse is more illusion than reality.

“After decades of transition ... the media landscape seems to be sliding further away from a path towards independence, plurality and sustainability”, Olaf Steenfadt, RSF’s global Project Director of the Media Ownership Monitor, said.

Launched by Reporter Without Borders (RWB), the "Media Ownership Monitor" (MOM) has been developed as a mapping tool in order to create a publicly available, continuously updated database that lists owners of all relevant mass media outlets (press, radio, television sectors and online media). More information available here , on our Resource Centre on #mediafreedom.

Media Ownership Monitor Albania is part of a wider project by Reporter ohne Grenzen, the German section of the international human rights organization Reporters Without Borders. It aims to increase transparency about media ownership across the world and raise awareness about the need of media pluralism as an indispensable tool for a healthy democracy.

The report as well as the data that are available online – reveals that about four major owners control about half of the audience share of the country’s TV market and 85 per cent of revenues from free-to-view TV. The print media market in Albania has been eroded over the last few years by falling revenues and circulation. In that field, one owner controls over 54 per cent of the revenues and more than 30 per cent of audience through two daily newspapers.

“Despite the many outlets, suggesting a quantitative variety of offer, financial records show that the lion’s share of revenues, defining market share, is concentrated in a handful of powerful family-owned media groups,” the report states.

“The myth that, despite its shortcomings, the Albanian media represents a plurality of views has been shattered. A handful of families reach more than half of the audience share and 90 per cent of the revenues in our media market,” Kristina Voko, Executive Director of BIRN Albania, said.

The Balkan Investigative Reporting Network (BIRN) consists of individual member-organisations, registered in Albania, Bosnia-Herzegovina, Bulgaria, Kosovo, Macedonia, Romania and Serbia. As a group of editors and trainers, BIRN enables journalists in the region to produce in-depth analytical and investigative journalism on complex political, economic and social themes. Through the production of Balkan Insight , BIRN`s online publication, the network trains local and regional journalists, demanding the highest international standards. BIRN emerged from the Balkan programme of the London-based Institute for War & Peace Reporting, IWPR, in 2005.

However, the chairman of the Albania’s Audio Visual Media Authority, Gentian Sala, who was present at the launch of the report, underlined that audience measurements in the country are shaky. He also noted that there are no barriers stopping new entrants to the market. “The problem in the Albanian media scene is that we have strong owners and weak business," Sala said, referring to the overall business culture in the country. “A big part of the spectrum is currently free for any person who wishes to enter the TV market,” he added.

Analysis of the financial statements of eight free-view television companies and two pay-to-view platforms shows also that the big media houses hold much of the revenue share as well. Albanians spent about €100 million on media during 2016. About €50 million of this went to two pay platforms. Another €18 million was collected through tariffs by the public broadcaster. Some €32 million was revenue collected by free-to-view televisions, earned mostly by advertising. Of eight companies operating in the free-view market, the two biggest, Top Channel and TV Klan, took 67 per cent of the revenue. There are dozens of other local stations in the country, but their presence is almost invisible in both audience measurements and in their financial statements. The print media market is very small in Albania. A dozen of print media companies analyzed earned just €4.5 million euro, more than half of which went to a single owner of two daily newspapers.

Albania first passed legislation aiming to regulate commercial audiovisual market in 1998. But the basic principle of ownership limits – which is to guarantee plurality within media companies and across the market – has been widely bypassed and ignored. The most crucial limitation included a ban of any person or family owning more than 40 per cent of a national broadcast media company.

Many EU countries have such limitations, designed to guarantee that the most important media outlets do not fall under the direct control of a single person or entity. But the legal limitations proved no real barrier for media owners in Albania, who used proxy owners to bypass them. 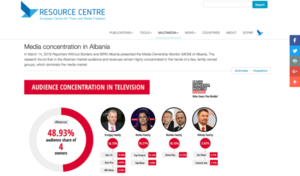 Media concentration in Albania: this infographic is available on our Resource Centre .

And, although there are no known cases of the authorities actually enforcing this limitation, it was still considered enough of a problem for media owners to lobby for its removal. In 2015, the head of the parliamentary group of the ruling Socialist Party, Taulant Balla, proposed a legal amendment to remove all limitations on ownership. Balla claimed such limitations “damaged fair competition” and “obstructed the development of the sector”. Local media organizations, as well the OSCE and Council of Europe, protested against the proposal, emphasizing the importance of pluralism in the media market. Under pressure, Balla withdrew his proposal. But in the meantime, an association representing key TV bosses challenged the law in the Constitutional Court. In May 2016 the court declared the limitation “disproportional” to the aim and struck it from the law.

Dorian Matlija, a legal expert, emphasized at the presentation of the results of the Media Ownership Study that, although the court had deemed the 40-per-cent ownership limit “disproportional”, parliament could still impose a new barrier. However, although parliament has changed the law on Audio Visual Media twice since 2016, no attempt has been made to fill the void created by the Constitutional Court ruling.

Besar Likmeta, BIRN Albania editor, underlined that high levels of concentration – and the fact that media owners in Albania have affiliated business in heavily regulated fields – pushes many journalists toward self-censorship , as they try to avoid the intricate web of interests created between media, politics and business. However, he added, when only the handful of reporters resist self-censorship, they are still denigrated and verbally abused by politicians at the highest levels, pointing the finger at current Socialist Prime Minister Edi Rama, the former Prime Minister, Sali Berisha, and others.

“Media owners have affiliated interests in companies operating in highly regulated and lucrative markets like construction, banking, oil, for profit higher education and gambling,” Likmeta noted. “High concentration is not only a problem in terms of ownership, audience share and market share but also in terms of advertising market, where a small group of mobile and banking companies award the lion’s share of the advertising volume,” he added. This “explains lack of reporting on alleged abuses from these multinationals on local consumers,” Likmeta concluded.