Freedom of speech under attack: pesticides and South Tyrol 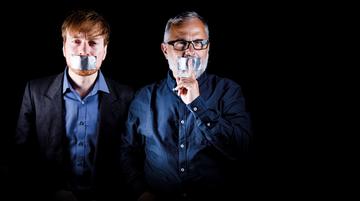 The Austrian author Alexander Schiebel and the German activist Karl Bär of the Umweltinstitut Muenchen, sued for defamation in Italy

OBCT signed the declaration of solidarity with Umweltinstitut Muenchen, the German environmentalists hit with legal SLAPP case in Bolzano together with Austrian author over criticism of massive pesticide use

Here the press release issued by Umweltinstitut Muenchen a week before the trial:

Freedom of speech under attack: German environmentalists and Austrian author hit with legal SLAPP case in Northern Italy over criticism of massive pesticide use.

Trial starts in the regional court of Bozen/Bolzano, Italy, on September 15th. Threats of imprisonment and fines, as well as potential claims of millions of Euros in damages.
Lawsuit is an attempt to intimidate critics of the high use of pesticides in South Tyrol (Südtirol /Alto Adige), one of Europe’s biggest apple growing regions.

Lawsuit corresponds to a strategy, more and more frequently used across Europe to silence critical activists and journalists.

Munich/Bolzano, 08.09.2020: The Munich Environmental Institute and the Austrian author Alexander Schiebel claim that criminal court proceedings being brought against them are a massive attack on their freedom of expression and is aimed at silencing critics of the use of pesticides.
Legal proceedings were started in 2017 by Arnold Schuler, minister of agriculture of the Italian autonomous province, after criticisms were published about the high use of pesticides in the Italian region. Apple plantations in the region are sprayed with pesticides up to 20 times per season, an above-average use in Europe’s largest continuous apple-growing region.

The charges are also being filed in the name of more than 1,300 farmers.

Three years after the charges were first filed, the public prosecutor’s office at the Bolzano Regional Court has started proceedings against Karl Bär, agricultural policy advisor at the Munich Environmental Institute, and Alexander Schiebel (author of „The Miracle of Mals“). The trial against Bär starts on 15th September.

Environmentalist Karl Bär said: „We see now that South Tyrol not only has a pesticide problem, but also a problem of democracy. The charges and complaints against us are without any foundation and have only one goal: to silence voices critical of pesticide use, pointing out their harmful effects to the environment and to human health. This case is only one of a long series of unsubstantiated lawsuits against activists and journalists in Italy and throughout Europe. Increasingly, companies and politicians are trying to use this method to
obstruct and intimidate critical voices.”

The lawsuit against Karl Bär was prompted by the provocative „Pestizidtirol” (“Pesticide Tyrol”) campaign that the Munich Environmental Institute launched in the summer of 2017.

For three days in August, a billboard was displayed in Munich to draw attention to the high levels of pesticide use in South Tyrol. Designed in the style of the tourism marketing campaign for South Tyrol, the poster was intended to illustrate the overuse of pesticides on the fruit plantations. In the case of Alexander Schiebel, the accusation of defamation refers to a passage in his book “Das Wunder von Mals” (“The Miracle of Mals”), in which he criticizes
the use of pesticides in South Tyrol and the behaviour of the local fruit growers. In the event of a defeat in the criminal courts, the defendants face not only financial penalties or imprisonment, but also possible claims for damages amounting to millions of Euros and thus financial ruin.

Nicola Canestrini, Bär’s and Schiebel’s lawyer, said: “Free speech is a fundamental component of democracy, and one of the most powerful weapons against tyranny and abuse of power. It should ring alarm bells that someone is charged for exercising such a fundamental right. We will fight in Bolzano for all environmentalists and journalists who uncover problematic practices relevant to the public interest. We will prove during the trial that pesticides are used excessively in South Tyrol and that they are dangerous for human health, animals and the environment".

During its two-year investigation, the Bolzano public prosecutor‘s office requested legal assistance from their counterparts in Munich. However, the latter refused to cooperate and referenced the German legal situation, as well as the right to freedom of speech as guaranteed in Article 11 of the Charter of Fundamental Rights of the European Union. Despite this, the Bolzano public prosecutor‘s office is pressing ahead with charges against Bär and Schiebel for
defamation. It is still pending whether members of the board of the Munich Environmental Institute, as well as the CEO of oekom publishing, the publisher of “The Miracle of Mals” will also be prosecuted.

Austrian author Alexander Schiebel said: „Arnold Schuler abuses his political position and makes himself a stooge of the powerful fruit lobby in South Tyrol. The provincial minister and the apple farmers want to sweep the excessive use of pesticides in their monocultures, and their consequences for nature and humans, under the carpet. Many local people oppose the massive use of synthetic pesticides but are subjected to a climate of fear that results of a constant threat to be the victim of legal charges. But we will not be silenced, quite the contrary".