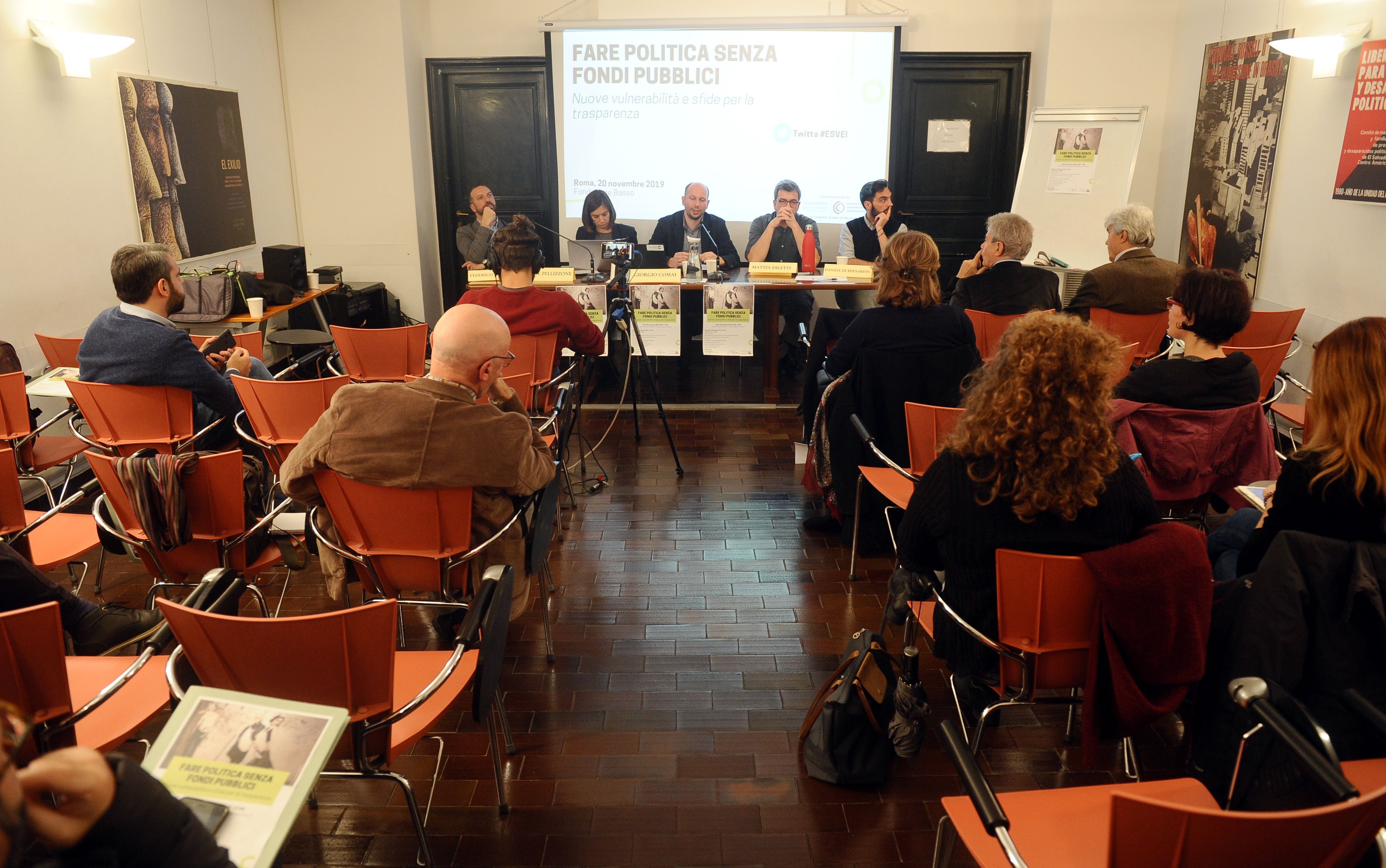 We publish the detailed report of the speakers' interventions at the policy workshop "Doing politics without public funds. New vulnerabilities and transparency challenges", which took place on November 20th, 2019 in Rome, as part of the ESVEI project promoted by OBCT/ CCI

The issue of foreign funding for political parties, political movements, or individual candidates as an instrument of interference in democratic processes has received much attention in recent years, including after recent scandals, such as the Lega-Russia case in Italy or the Ibiza-gate in Austria, which led to the resignation of the government led by Sebastian Kurz. Regardless of the dynamics of these specific cases – explained Giorgio Comai, OBCT researcher and analyst and ESVEI project coordinator – the issue of a political system's transparency and vulnerability to both external and internal interference is crucial for the integrity of democratic processes. We talked about it during the seminar "Doing politics without public funds. New vulnerabilities and transparency challenges", which was held at the Basso Foundation, in Rome, on November 20th. We summarise the main points addressed by the speakers.

At this link the full video of the conference is available, curated by Radio Radicale. Here  a video-summary of the event by OBCT, with interviews with the speakers (in Italian).

In the institutional greetings Mario Raffaelli, president of the Centre for International Cooperation, recalled – also on the basis of his experience as MP and under-secretary, that the issue of party financing has existed for many years. The Piccoli law in 1974 introduced public financing, but without adequate control mechanisms and without actually regulating parties. According to Raffaelli, the issue was tackled inconsistently, with overlapping laws creating a complicated landscape: transparency, public funding (even just "in-kind"), and regulation of lobbying are needed.

Irene Pellizzone, professor of Constitutional law at the University of Milan, explained the legislative framework: law 96/2012 is very relevant for the issue of transparency, followed by the decree by the Letta government that abolished direct public funding (law decree 149/2013), the so-called "anti-corrupt law" (law decree 3/2019), and the "growth decree" (law decree 34/2019).

According to the jurist, the legislation is complicated both because of the rapid series of reforms and because of the textual formulation: for example, the "anti-corrupt law" is composed of a single monstrum article with a large number of paragraphs.

According to the scholar, the advent of transparency is however an important moment, even if it is not sufficiently implemented. Indeed, equating other organisations with parties has in some ways created an excess of transparency, which leads to a form of opacity due to confusion. It is not even clear who can and who should send the data to the Commission guaranteeing the statutes and for the transparency and control of the statements of political parties, which presides over the publication of such data, and which also lacks the structure and resources to identify the recipients of the obligation. Other implementation difficulties, Pellizzone emphasises, stem from the frequent birth of new parties.

Daniele de Bernardin, political analyst at OpenPolis, pointed out that many laws on the subject, including the abolition of direct public funding, were made in a hurry.
De Bernardin illustrated how party coffers have emptied over the years: the 2x1000 mechanism is an experiment that is failing, because few citizens use it. Private donations have also dropped, and most donations actually come from MPs: in fact, this means going back to public funding. Yet, doing politics has a cost. Today, parliamentary groups are the main source of money for parties, funds improperly used for party activities: according to De Bernardin, this too is actually another form of public financing.
In recent years, think tanks, foundations, and associations have been replacing political parties for political activities. Among the examples cited, the Open foundation (now closed) and the Civil Action Committees of Matteo Renzi, used for example for the organisation of the Leopolda event.

The revenues of parties and M5s are featured as reported in the deposited financial statements. For 2017, at the time of data collection (July 2018), the statements of Stella Alpina, M5s (association), Idv, Cor, Mov. Puglia in più, Fare! were not available.

SOURCE: openpolis elaboration on the statements presented by the parties

The 5-Star Movement uses numerous structures for its activities, including the Rousseau association, the association Gianroberto Casaleggio, and committees created for the elections. De Bernardin emphasised that this multiplication of subjects makes monitoring more difficult.
Some official documents, for example those related to the donations received from the candidates, are published in such a way as to be a bluff: illegible scans, wild patches that cover also key data – a mockery for the citizen. As De Bernardin pointed out, communication does not mean transparency. Furthermore, the Guarantee Commission does not have the means to carry out its work, and such work has further increased since 2019. "Weaker parties lead to a weaker and more vulnerable democracy", the Openpolis analyst explained several times, highlighting how public funding was abolished without thinking private funding through.

Mattia Diletti, professor of Political Science at the Sapienza University in Rome, started with a quote by Mark Hanna, strategist for William McKinley, president of the United States at the turn of the 19th and 20th centuries: "There are two things that are important in politics. The first is money and I can't remember what the second one is". According to Diletti, the abolition of party financing is a mistake that will be remedied after the next scandal.
Professor Diletti examined the question of think tanks, one of the structures sometimes used alongside the parties. Diletti explained that the think tanks are a subject of US derivation, which in Italy had a boom in the second republic. But there is one phenomenon that is unique to Italy: personal think tanks. In 2011, there were 34. Think tanks in Italy were born before the recent reforms, with a boom in the years 2007-2009, linked to the birth of PD and PDL, which left ample freedom to individual leaders. As Diletti explained, these are almost individual firms, tied to increasingly unstructured parties. The multiplication of these structures has raised a certain concern, which however the political scientist regards as excessive considering the turnover of these subjects. Meanwhile, they have decreased in number: today there are only about 15 personal think tanks. According to Diletti, attention should also be paid to think tanks' relationships with foreign countries.

According to Federico Anghelé, director of the Italian office of The Good Lobby (which has recently incorporated Start the Future), we can talk about a failed reform: no order has been made in the legislation; the financing of politics has not been reformed in a comprehensive way; the threshold of € 100,000 – the maximum that a person can donate in a year – concerns parties, but not politicians and candidates; information is missing on "other utilities", i.e. contributions other than financing.
Anghelè pointed out that many countries have switched from private to public financing while Italy has done the opposite, and that a mixed system could be a possible solution.
Also according to Anghelè, the results of 2x1000 are underwhelming, although this could be an important element because it splits up donations, involving citizens in politics and reducing the role of large donors. The Good Lobby analyst cited the example of the donations made by the Moby shipping company to the Change foundation of Liguria president Giovanni Toti which, according to the analyst, raise doubts, although there is an improvement compared to the past, when the names of the donors were unknown. It comes natural to think that companies that finance politics can do so in order to obtain advantages in return: therefore, in addition to the problems related to the legislation on financing, there is the lack of an organic regulation of lobbying, or representation of interests (often made at foundations and political associations). Overall, Anghelè concluded, much remains to be improved in terms of transparency.

At the conclusion of the works, Giorgio Comai opened the discussion on possible solutions, illustrating some proposals as food for thought:

During the debate, Pellizzone wondered to what extent the lack of transparency is a matter of law and to what extent it is a matter of implementation of the law, while she expressed doubts about prohibiting donations from companies.
De Bernardin pointed out that some rules are not implemented at all. According to the Openpolis analyst, the range of organisations equated with parties needs to be limited. There are, however, ways to circumvent the system: organisations can eschew transparency obligations by avoiding having politicians in the top management.
Mattia Diletti agreed with lowering the threshold of donations, although perhaps this should be done gradually. According to the professor, parties are not currently able to attract funds from below and need to reorganise. The solution, stresses Diletti, could be the reintroduction of public funding, but to a lesser extent than in the past, in order to force parties to have relations with society. Diletti does not agree with the prohibition of financing by companies.
Federico Anghelé fears that a low threshold to donations, in the absence of an organic vision, would push parties to look for loopholes. The Good Lobby analyst pointed out that the threshold currently set is not valid for subjects equated to parties. According to Anghelè, candidates should be given codes of conduct, rules on which funds to accept and which are not.
Finally, Giorgio Comai wonders whether it makes sense to prohibit donations from citizens of other European Union countries, risking to limit the development of transnational political forces in the European political space; according to Pellizzone, this prohibition may be inappropriate, but it is probably not unconstitutional.

At this link the full video of the conference is available, curated by Radio Radicale. Here a video-summary of the event by OBCT, with interviews with the speakers (in Italian).