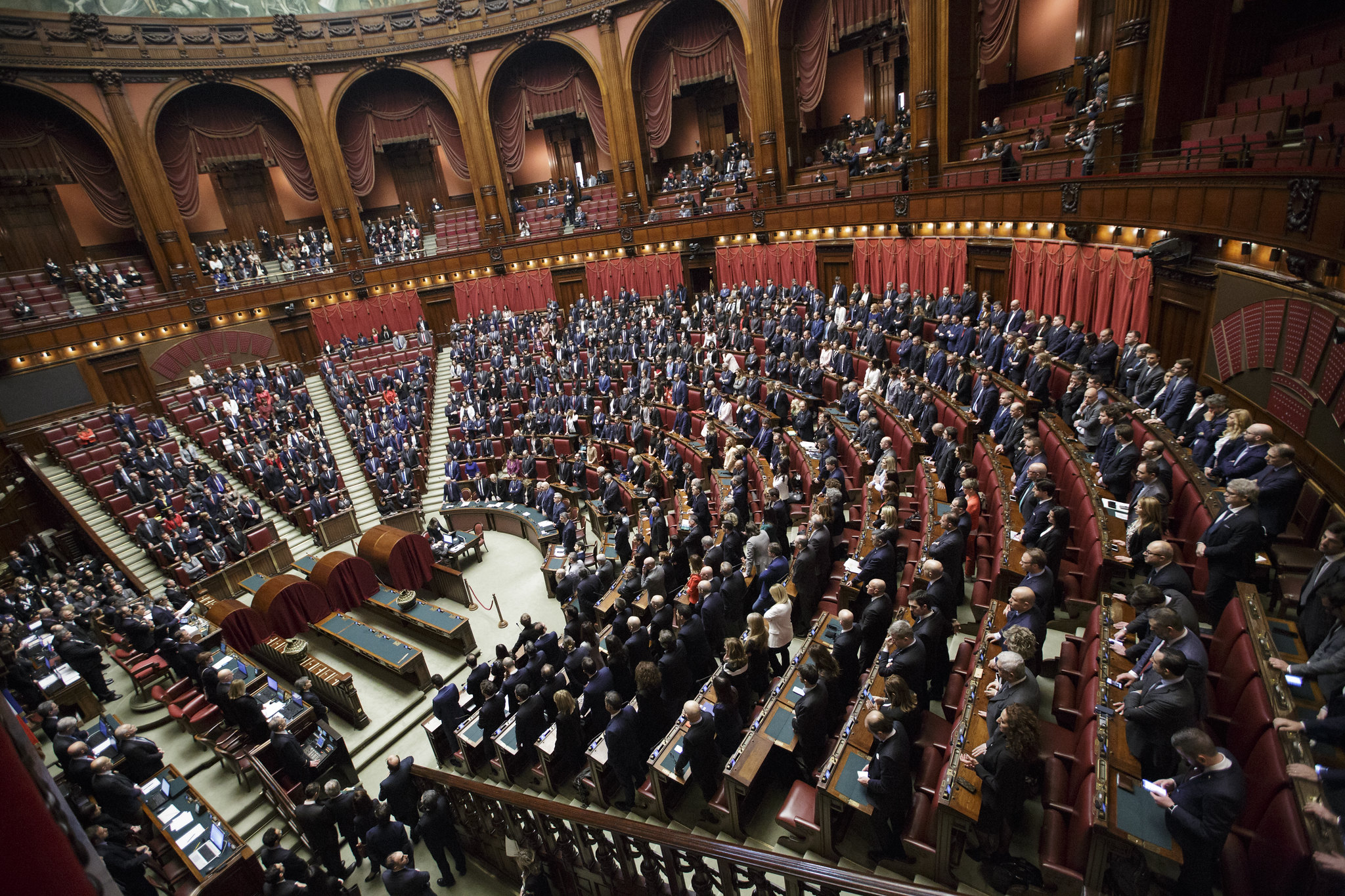 The current rules to make political funding more transparent do not work. Unusable data and inaccessible information make transparency a bluff. From OpenPolis, a proposal on how to solve the problem

In recent years, funding for political parties has undergone a revolution. With the gradual abolition of public funding and the transition to a mainly private-centred system, the rules of the game have changed.

All this in a historical period in which the theme of transparency appears increasingly central. It is not by chance that in this very phase numerous laws have been approved to increase the obligations in terms of communication and financial reporting both for parties and for those elected: many operations that in various ways have tried to make the parties' cash flows, incoming and outgoing, more understandable.

But these operations have failed. The current rules oblige the political system to communicate a set of data, but the ways and times in which they are provided make all these attempts useless. From the MPs' statements of electoral expenses to their patrimonial declarations and the budgets of parties: so much information is made available in principle, but in practice does not help monitoring of the matter. Solving the problem would be easy, and it would not even cost much.

The background, the reporting of parties and MPs

Before we get into the specificity of the problems, let us understand a little better what the current transparency obligations are for political funding.

The law on the publicity of the patrimonial situation of holders of elective and executive offices dates back to 1982. In particular, it establishes that MPs (among others) are required to deliver the asset declaration, the tax return, and contributions received for the election campaign to the house of belonging. In the XVI Legislature – also thanks to the OpenPolis awareness campaign – the Chamber and Senate bureaus established a system of voluntary publication on the web of statements for MPs who gave their consent. Since February 2014, publication has become mandatory – by "transparency decree" (legislative decree March 22nd, 2013 n.22), it must be in an open format to facilitate its re-use.

As for parties, the latest changes in terms of transparency were made with the anti-corruption law of the Conte I government, approved at the end of 2018. For each contribution received, parties are required to record in a special register – within a month – the identity of the donor, the amount of the contribution, and the date of disbursement. The same data must be reported in the party's report and simultaneously published on the related website – all to be made available online by July 15th each year.

Why this information is unusable

If, in principle, the framework of norms in Italy might seem advanced, in fact it is far from it. To understand the state of the art it can be useful to give concrete examples of what one has to do when analysing this matter.
In a system that is moving increasingly in the direction of private financing, the theme of the contributions received from the elected is growing in importance. It is clear, however, that formats that make data fully accessible, searchable, and reusable are not used when there is an obligation to publish. In fact, one mostly finds handwritten documents, scanned and uploaded in pdf format, with the result that some parts are illegible.
Here, for example, what was communicated by MP Emanuele Fiano on the Montecitorio website, in the section devoted to the contributions received. Beyond what is reported in the document, the quality of the documentation provided seems to be from another era. Not only is there a complete lack of reusable data, as required by law, but what has been made available is absolutely not legible. It is difficult to argue that a member of parliament does not have the capacity, as well as the means, to provide such information in a better format. At the same time, no one within the institutions takes responsibility for verifying, and therefore condemning, such behaviour. 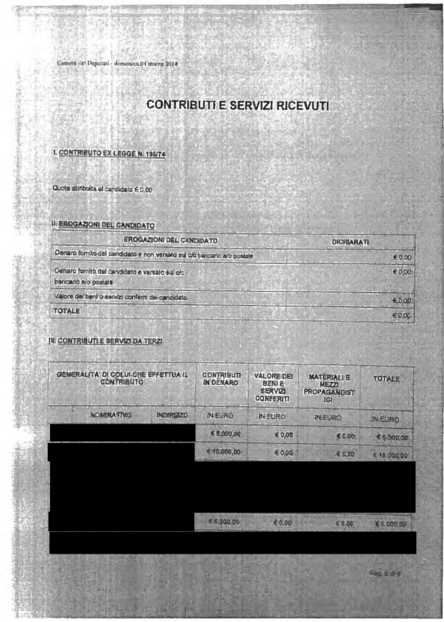 The cases are numerous, and involve politicians of all sides in parliament. Even in cases where words and numbers are legible, they are handwritten, and it is therefore up to the citizen to understand the MP's spelling. Here, for example, the official documentation delivered by Senator Casini on the expenses incurred in the electoral campaign. Once again, it seems unrealistic that, in 2019, the solution chosen by the institutions to communicate this type of data could be the following. 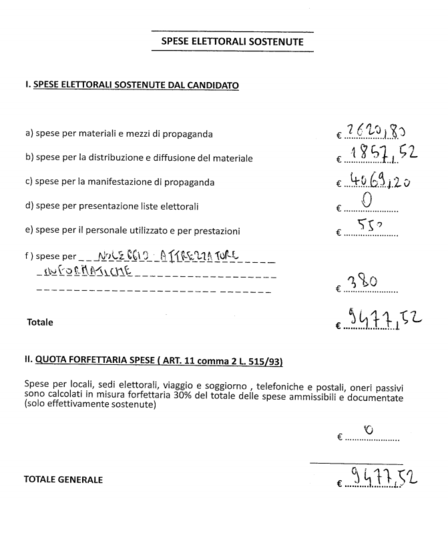 Another recurring event is that some parts of the documentation, readable or not, are intentionally covered. Until the last legislature, the obligation of publicity for the donations received was for any sum exceeding 5,000 Euros (currently lowered to 500). Most of the information regarding donors, however, is covered by elected officials. One thing is to delete sensitive aspects, another is to make the presentation of the document useless.

We report two cases, among others, of MPs Meloni and Boschi. The latter, in addition to covering most of the text, cancels the amount received with a pen and rewrites a lower one by hand. Covering so many elements actually violates "the obligation of publicity" for donations exceeding a certain figure: only the amount remains, like for smaller donations. 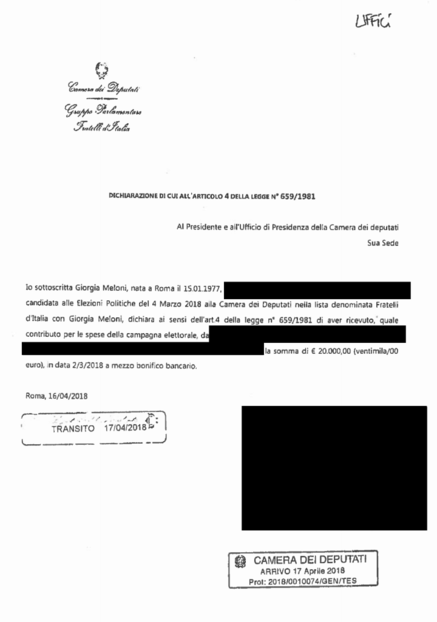 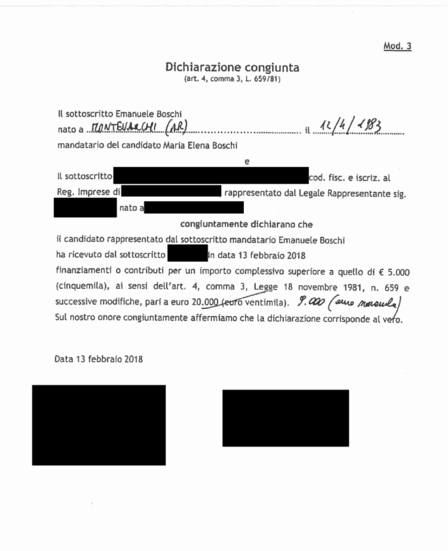 During the last legislature, with the project Patrimoni trasparenti , we denounced the many issues with the current reporting system for deputies and senators. Inconsistencies that no one checked, including the high number of parliamentarians – 266 – who declared no expenses or contributions of any kind for the electoral campaign: a very unlikely scenario. With the current legislature nothing has changed, and fake transparency on the subject remains.

The situation for parties

The transparency obligations for parties are now extensive. In addition to balance sheets and reports, the list of donors who have donated a sum in excess of € 500 on an annual basis must be published on the parties' websites. In the case of parties documents are more easily traceable, but the problem, once again, lies in the way in which they are made available.

Each party adopts different budget models, sometimes making the comparison between the different documents complicated. But this seems to be a minor complication, since the documents are released in non-reusable formats, with the data not easily extractable, if not manually. Here, for example, a part of the 2018 budget of Lega Nord. 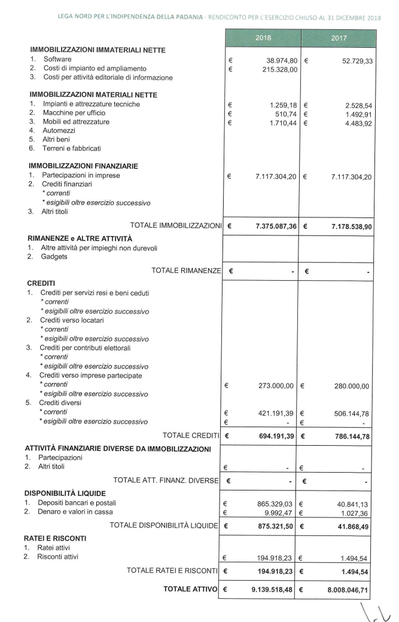 The problem also concerns the list of donors. All parties have a section on their site where one can browse the list of donors. Once again, however, these are long lists published in PDF format. The point is that communicating these elements is not enough to ensure transparency. The data need to be supplied in open formats, so that they can be analysed and compared, without manual intervention. This is, for example, the list published by the Democratic Party for the donations received in 2019. 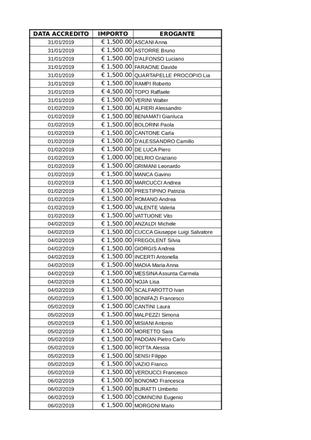 Changing things is cheap, but there is no political will

The commission for statutory guarantee and the transparency and control of the budgets of political parties also publishes the list of disbursements to political parties and movements registered in the national register. This is a useful instrument which aggregates all available data in one place: the structures involved by the legislation, the various donors, and the amount involved.
The information published in this way, however, is not reusable, unless by intervening manually. The commission itself has repeatedly alerted on the few resources available to carry out its supervisory work. The very fact that the relevant body is not given the means to do its job demonstrates that transparency in this area is a bluff.

It is therefore necessary to introduce a single, centralised tool for entering budget data for parties and, in the case of donations, also for MPs. This would allow easier data collection by the relevant bodies, and above all would be an actual action of transparency towards the citizens. The creation of such an instrument has a very low cost, being something easily achievable, and would allow to solve 3 central questions:
• uniformity of the financial statements models and documents;
• the need for a single framework for sharing donation data;
• the creation of a system that allows citizens, journalists, activists, and researchers to have actual access to the data in an open format.

Why all this is a problem

As we have already had the chance to tell, the abolition of public funding for parties has actually multiplied the number of subjects involved. Furthermore, this transition has given a new centrality to private funding, which today can be a great opportunity for political parties and movements. The complete absence of a centralised system suited to our times to share all this information is not acceptable.

All this is a risk because it does not allow real monitoring – which is necessary because it is the only way to ensure that private financing does not become a way to carry out illegal activities, and a means of interfering with the country's democratic processes. Not having real data available on the topic of political funding makes the system more vulnerable.