Media freedom and the protection of journalists in the Western Balkans

Jeopardising the effectiveness of journalism in South East Europe: the role of extra-legal policy mechanisms 16/03/2017 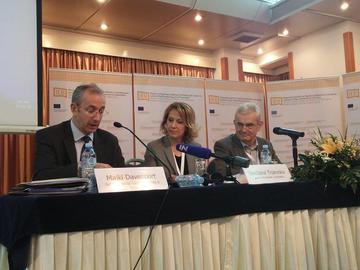 Presentation of the study in Belgrade (photo HND)

Recently established, the regional platform for media freedom in the Western Balkans warns about the increased use of physical violence as a tool of intimidation against journalists

Politicization of the media and lack of protection for journalists are the focus of the first regional report on media freedom in the Western Balkans , drawn up by a coalition of news organizations in 6 countries in the region. Particularly worrying is the growing recourse to physical violence as a tool for intimidating the press: as reported in the study, cases of attacks against the person or the property of reporters registered since 2013 amount to 131.

The study also denounces that all cases of murder of journalists that have occurred in recent years have gone unpunished and, to aggravate the picture, there is a strong reluctance on the part of government officials to unreservedly condemn the violence against journalists.

To give these worrying trends due visibility, the regional coalition gave birth to safejournalists.net , an online platform that collects and presents statistical data on attacks against journalists in the region. Until now, in the countries considered in the report - Bosnia and Herzegovina, Kosovo, Macedonia, Montenegro and Serbia - no mechanisms have been established by state institutions to keep track of violence and threats against journalists.

Implementation, nowhere to be found

From the point of view of legal protection, the regulations adopted by countries in the region tend to be in line with European standards. The real problem therefore regards the implementation sphere. This holds true in particular in the field of the protection of journalistic sources, which is being challenged by documented cases of pressure on reporters to disclose sensitive information. Cases of this type include the events that affected Indeksonline portal in Kosovo, Teleprompter in Serbia and Klix.ba in Bosnia and Herzegovina.

When it comes to access to information, the whole region is experiencing lack of cooperation from the side of public authorities and long delays in providing the requested information. Political parties and the government, it is said in the report, are usually the entities putting up greater resistance to release information.

Another trend highlighted by the study is the one that sees more and more often "critical journalism" seeking shelter in the digital space, an area perceived as a free zone, where it is still possible to publish investigations that wouldn’t find any room in printed media or on television. Yet, online media are increasingly targeted, and it is significant from this point of view that none of the countries taken into account by the analysis has so drafted a specific regulation protecting media freedom online.

Regulatory authorities and Public Service Media are influenced by the political power. Political interference is also exerted on media outlets, and it is especially at local level, through the allocation of public funds through advertising contracts.

The influence of politics affects also the scope of professional organizations: parallel journalistic organizations have been established across the region, which formally represent alternative orientations within the profession of journalism, but whose main objective is in fact to impair the legitimacy of the autonomous professional bodies.

Polarization within the category of journalists is also confirmed by the fact that many of the journalists consulted complain of being subjected to attacks coming both from political power and by their colleagues who, to discredit them, accuse them of being on the pay list of foreign powers.