A tourist in Damascus 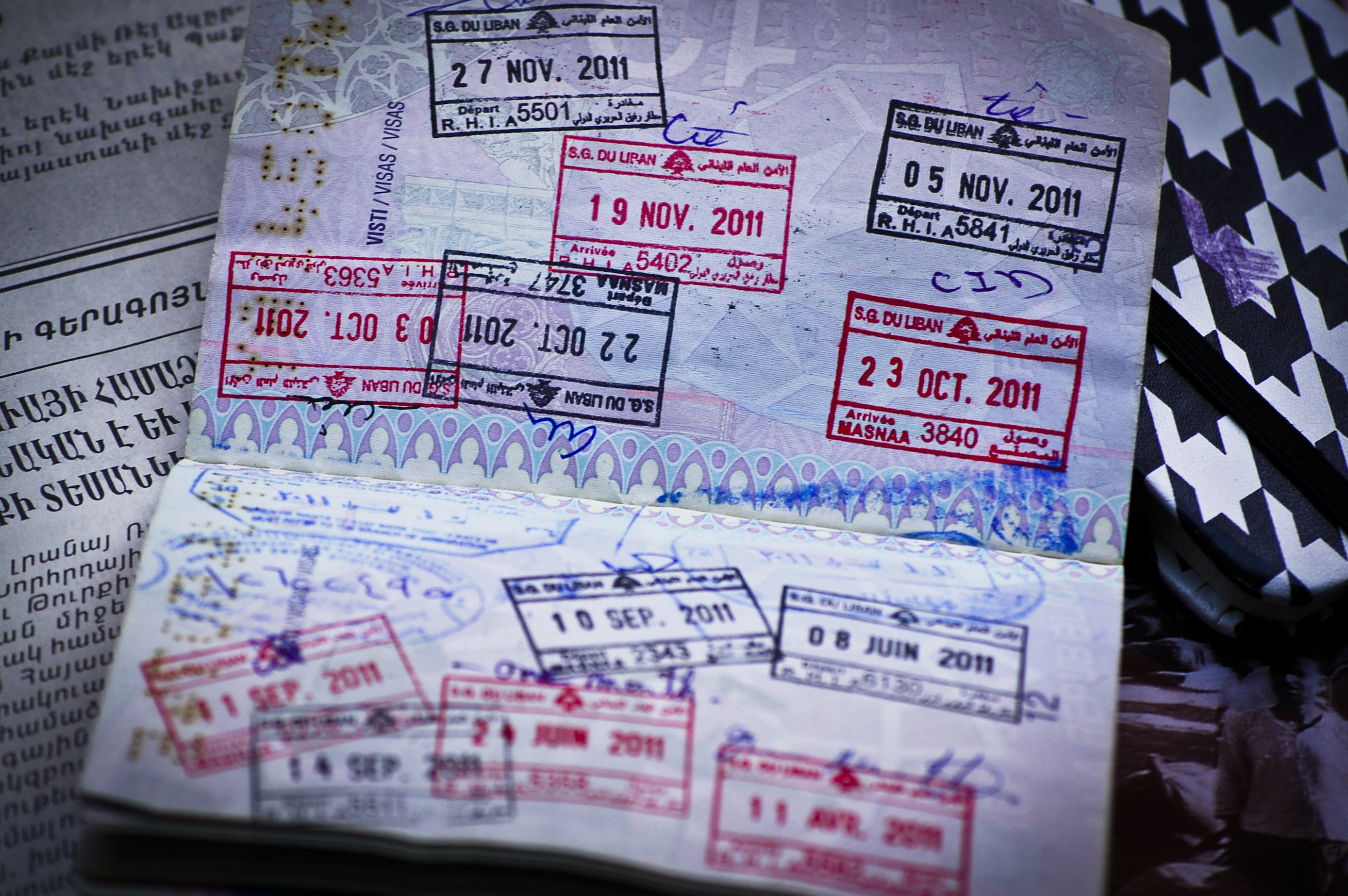 Damascus. When I get there, in December 2011, the uprising against Bashar Al Assad has been going on for ten months. In the city, under the ever-present eye of the dictator, everything seems calm, though at the same time absent and precarious. Even for the historical Armenian community, once again prey to its destiny of chronic lack of safety. The thirteenth episode of “From the Caucasus to Beirut”

“Reason for visit?” The cigarette is burning slowly on the neck of the ashtray. “Tourism”. The customs officer tilts the passport, studying its filigree reflections. “Where are you staying and for how long?”. With his chest thrown out, Bashar al Assad towers in a portrait over the officer’s shoulders. “At the Al Rabie hostel”. The cigarette is almost half-way. “I’m staying for the week-end, I have to get back to work on Monday, in Beirut”. The Lebanese annual work permit is open on the desk, next to the ashtray. “You sure?”. Before I can answer, the stamp beats on page 11. The cigarette, now only a butt, falls in the ash. “Welcome”.

Emptiness gives the way to fullness

The border unwinds on a desert ridge, a stony yellow surface swallowing the no man’s land between Lebanon and Syria. As if the thick green in the Bekaa valley - only a handful of kilometers away – had been set on fire on the border line. A truck lies solitary on the side of the road, a remainder of the caravans striving up these ramps up until a few months ago. The only passage of land between Lebanon and the rest of the world is a silent line of tarmac, beat only by the wind of bad news. A giant poster of the President bids welcome: “Syria united belongs to the Syrians only”. In the shade of the poster, a shepherd is feeding his dog.

Damascus is announced by Soviet-style buildings, desert embankments, austere and indelible witnesses of the alliance that once bound Syria to the Kremlin until the fall of the Communist bloc. A vain and repeated effort made by the regimes to bind their longevity to that of the concrete. The taxi rides under the blocks, quickly through the junctions and roundabouts that in other times would have cost hours in traffic, whilst an imminence-filled atmosphere seems to be looming over everything. Stores, lights, people on the sidewalks: everything is in its place, but is somewhat distant, precarious, absent. Down the avenue, the statue of Salah ed Din on a horse guards the entrance to the old part of the city.

In old Damascus, guarding an urban civilization more ancient than the Italy of the Communes, a drilling replication of Bashar Al Assad’s portrait makes its way anti-historical and vulgar through the protective alleys of the city. The leaderism achieved by the Arab power in long decades of dictatorships is not able to renew itself in the bony built of this slouching man. Lacking the mass of Gheddafi and Moubarak or the puffed up bearing of Ben Ali, his counterparts already swept away by the Arab Spring, the picture of Assad resists as it relies on a glassy and sharp look, a frown with no character that vibrates like a muffled sound in the daily life of Syrians. The cold eyes of a power that has drowned the people’s uprising in blood.

Bab Sharqi, the Gate of the Sun, Eastern border of the old city. Beyond a white-stone surrounding wall, the bell of the Armenian Church of Saint Serkis tolls the Sunday Calling. Prayer after prayer, the liturgy is attended by about a hundred faithfuls for the whole morning, while two distinguished gentlemen linger smoking in the bright sun flooding the courtyard. I observe a marble bas-relief portraying the deportations of 1915. “Tourist?” The older gentleman cannot curb his curiosity towards a new face. “Yes. Italian” A look of wonder crosses his eyes: tourism in Damascus has practically disappeared in the last few months. In approaching me, the man offers a packet of cigarettes. “You are welcome”. He then turns to his friend in Armenian sending him off to a gate: he immediately comes out of the same gate with three coffees.

‘An ill wind is blowing over Syria’. When mass ends, tens of people greet each other in the courtyard, a space that is made intimate by the walls around it. Vartan, a retired merchant who used to sell Italian products, recalls his youth years. “I used to go to Vigevano to buy shoes, Milan to buy fabric, Venice to buy jewels. But those were other times, Syria was a rich Country. Now only those who can’t leave remain”. Of the 150.000 Armenians who populated Damascus and Aleppo until twenty years ago, less than 100.000 are left. “Up until the ‘80s we were a strong community, in money and in numbers”. While we are walking towards his home through the alleys of the Christian quarter, tens of shutters rolled down testify the hard times affecting the Country. “It’s different, today. We no longer have certainty for the future”.

Down an alley, its knob made smooth by the touch of hands, a small door made of boards and wrought-iron squeaks as it opens onto a courtyard. “We only come here on the week-ends, to be all together”. The whole family is gathered round a table ready for the Sunday lunch, while the presence of a stranger is no longer reason for embarrassment and everyone discusses what is happening to the Country. “Every day, the news gets worse. The rebels are more and more organized, armed by foreign Countries to bring the war right inside Damascus”. The fear of war is expressed like an oppressing sense of being under siege: the enemy is at the gates.

“Why don’t you take part in the change?” All at once, silence sinks at the table. The spontaneity of my question is mistaken for naivety. “What is happening will bring us no good” Vartan speaks up, while everyone listens. “This uprising is organized by Sunnite terrorists who want the power to rule over everybody else, with the support of Saudi Arabia. It is not the first time they’ve tried this. The same happened in Hama in 1982. And the only one who can keep the fundamentalists at bay, now as then, is President Assad” While speaking quickly, Vartan reveals something much deeper than his words: as in every violent clash, the positions of the opponents are polarized, definitive, lacking legitimacy for the adversary. “But there are also Christians, among the opponents.” Vartan almost does not let me finish. “They are paid, just like everybody else.”

Damascus breathes by the rhythm of history. In the darkness of the alleys, as in the large hectic avenues of the suks, there is a thread linking the present to a monumental past. The thick and resigned humanity populating the city moves head low among the great ruins of ancient civilizations, gracefully integrated with the city’s living architecture. Today as in the seventh century, the Umayyad Mosque, legacy of the Arabic dynasty, the first to rule from the Atlantic to the Indian Ocean, is attended by families who, during winter days, warm themselves on white marble inundated by the sun, among high Roman columns and the stately façade of the Byzantine temple.

From this symbolic place, ten months ago Damascus let out its cry of uprising, fully embracing the purposes of the Arab Spring and dragging the capital out of a passiveness that had lasted 40 years. Were those who took part in that demonstration driven by sectarian interests or did they have a different, fairer and more just idea of society in mind? Before exiting Syria, I have to meet one of those guys: in a while, History will no longer have the time to understand who did what… it will be busy counting the dead.

Only a few weeks after the events herewith narrated, the few visitors still in Damascus disappeared from its alleys. Since the beginning of 2012, Syrian authorities have not released tourist visas at the border.