Under the bombs, in Donetsk 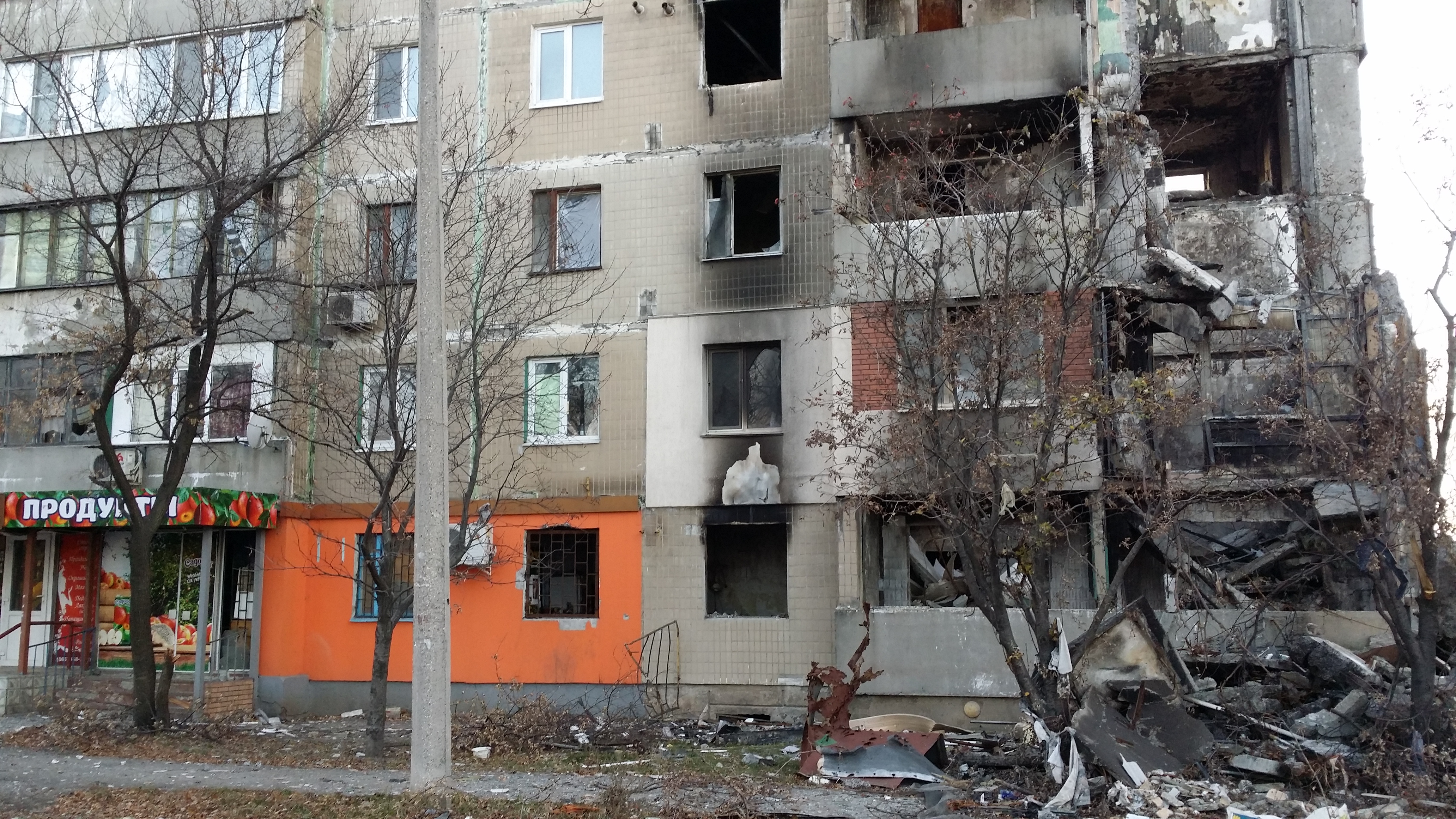 Bombs have never stopped falling over Donetsk. The January 22nd bombing, when a city trolleybus was hit by mortar fire and 13 people died, is just the latest tragedy

An elderly couple is sitting on a bench in a courtyard between the condos in Yasynuvata, 20 kilometres north of the centre of Donetsk. The children's playground is just next. A man walks his dog. Two burned cars no one removed. Windows with broken glass, closed with cellophane. A gap between the second and the third floor is still open. From a distance, the thunder of tanks.

"See any soldier here?", says the woman. "My son lives in that building that was hit. There are children, no weapons, none of that. Then why are we under attack?"

The village of Yasynuvata, under the control of the militias of the DNR, the self-proclaimed Republic of Donetsk, was heavily bombed last summer. According to locals, the bombs came from nearby Avdiivka, where Ukrainian forces stationed. With clashes intensifying again, the separatists are strengthening their position and Yasynuvata could be back under fire. 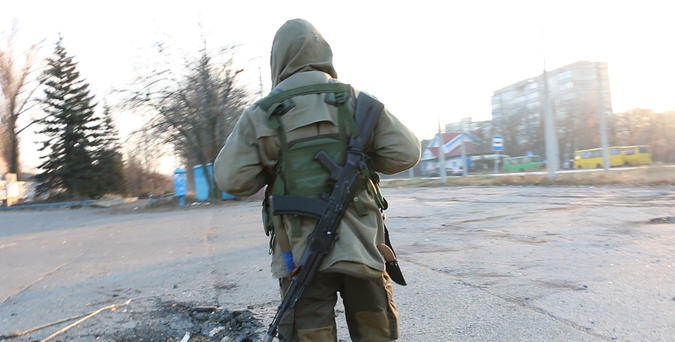 "My husband and I fled to Russia, at my sister's”, she continues. "But then we had to come back. Even if we have not received our pension for five months, our apartment is here. That's all we have. But I don't know how long we can resist, eventually we will go back to Russia. There I left my mother, she is 90".

A couple of miles away, in Zorka, there is the station of the Vostok battalion. It is the last outpost on the road that goes north, where the Ukrainians are. The militiamen settled where a café used to be, just opposite the factory that made work machines. Here, the artillery pounded mercilessly. A ten-storey building is half burned, the other half is still inhabited. The shots from the north have massacred the old factory building. The militiaman escorting me – we are in the area of operations and Vostok does not want journalists strolling around – has a Caucasian beard, very popular in Donetsk, and does not talk much. When I ask him what he thinks of peace talks, he just waves his Kalashnikov. “That's how we respond to the Ukrainian politicians who speak of peace", he growls. "There will be peace here only when they leave our borders and leave us alone. We, too, cannot stand being camped here anymore".

Statistics are merciless: it is unlikely to die in Donetsk taking a bus or walking down the street, but it happens. The tragedy of January 22nd shows that no area is truly safe. The two mortar rounds hit a street south of the centre, about ten kilometres from the front line. The rebound of responsibilities between separatist and Ukrainian forces adds pain to pain. Meanwhile, the people of Donetsk can only hope not to fall into the statistics. 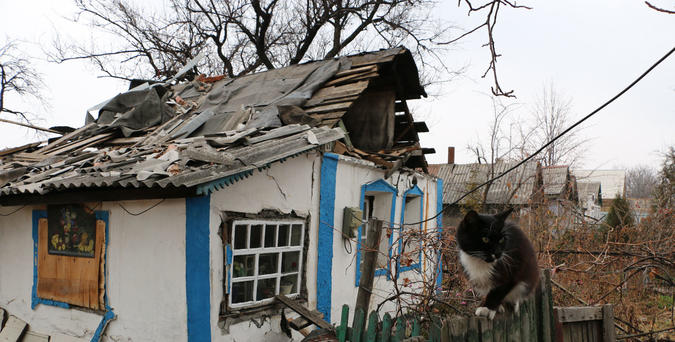 Artem lives in Kuibyševsky, the most massacred district of Donetsk, a mortar shot from what remains of the airport. A bullet crashed straight into the courtyard of his house. Luckily nobody got hit, and he can show the shards he collected. Large as pine cones.

The neighbourhood is made of small houses with sloping roofs. The roads are dirt and the grass is high. Here and there you can see the signs of random bombings. A house was hit in the middle and is now abandoned. The one next door is still inhabited. "Those who could have already gone", says a woman carrying a shopping bag. "Only those with no other place to go are still here. There is no future here". Her words are punctuated by the continuous crackle of machine guns, a few hundred metres away. Every now and then, a stronger explosion startles you. "Here, this is how we live now".

On days when fear beats being used to the bombs, people seek shelter. "Usually we sleep on the ground, to stay away from the windows", says Katya. "But when the explosions are stronger, then we go down to the shelter". The "shelter" is nothing more than the basement of the building. Dirty, wet, smelly. There are a couple of chairs and a light bulb hanging from the wall. "But we brought wi-fi, so at least we can communicate on the Internet. We cannot sleep anyway, and the nights are long". Now, in winter, the cold is another enemy to fight with.

But there are neighbourhoods where families live day and night in shelters. Yevgeny coordinates a volunteer organization that collects essential items to bring to those who live underground. The refuge of Petrovsky is one of the largest – it is home to about sixty people, including a dozen children. The beds are next to each other, there are no toilets or heating. "There is also a health emergency", says Yevgeny. "Hygienic conditions in the shelters are very bad. We are to take precautions, wearing masks and gloves. Some volunteers already got sick".

Where the bombs come from

Starobeševe is a village of four houses, about thirty kilometres south of Donetsk. We are in full DNR territory. The militia's tanks are hidden in the fire house. The fiercest battle of the war, the Battle of Ilovaisk, was fought in the countryside around here. 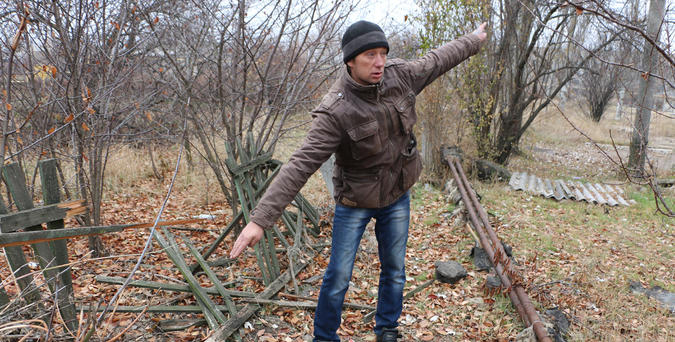 Dima pulls me by the sleeve. "Want to see what they do?" We go into the courtyards and reach a primary school. Stuck in the ground, there is an unexploded rocket as big as a gas cylinder. "See, they do not even spare children. See how close to the school it is? If it had exploded... Actually, it could still explode". When I ask him who does not even spare children, he just laughs. "The Ukrainians, of course. Look at the angle of the rocket. It came from the west, from the Ukrainian side". A big man dressed in black who had approached disagrees. "Look", he says, "it actually came from the east and when it got stuck it did a rotation, like that. It was fired from the side of the opolčentsy, the DNR militia". Dima shrugs.

This dialogue is a pill of realism which perfectly sums up the sentiment among the people and what we have been seeing after the bus tragedy. You can rarely know who is shooting from where. Meanwhile, the simplest thing to do is to blame the enemy.