Ukraine, not (yet) a country for journalists

Nadezhda Azhgikhina: “Let’s remember that journalism is a public good" 08/03/2022 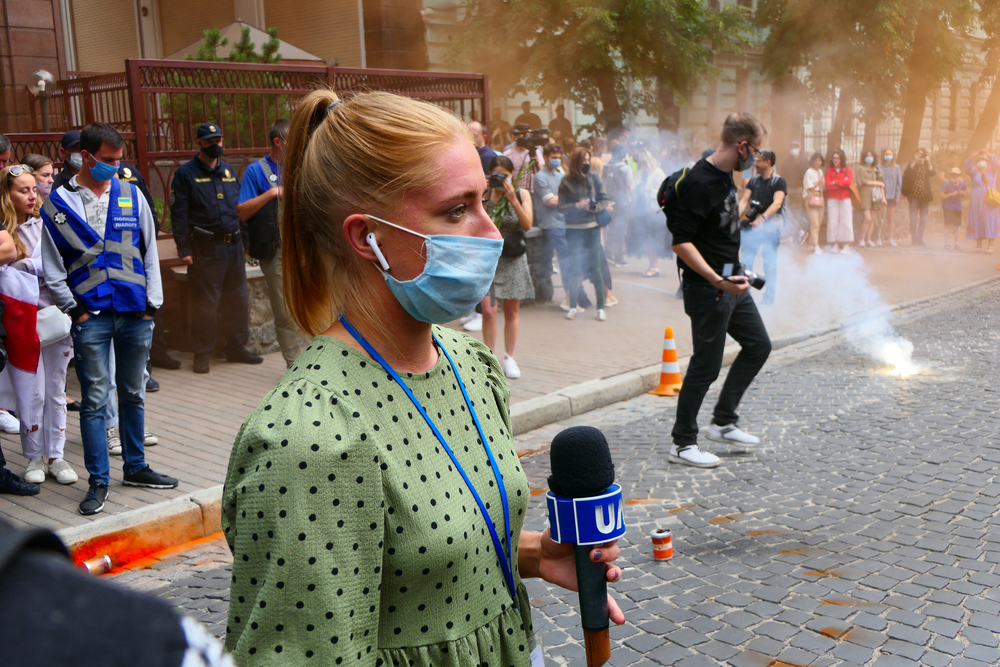 A journalist working in Kiev in August 2020 (© Oleksandr Polonskyi/Shutterstock)

Ukraine has gained some positions in the global ranking of media freedom – sadly, only because of demerits of others, as the situation in the country shows no improvements

The global emergency, growing authoritarian trends in different parts of the world, and the role of social media with the striking case of Donald Trump have recently rekindled the discussion on press freedom and the role of journalism – a complex one that remains particularly risky in many parts of the world. According to the usual ranking on press freedom published by the international organisation Reporters Without Borders (RWB), 2020 was a particularly difficult year for the countries of Eastern Europe and Central Asia, with many of the existing trends further accentuated by the converging the health and political emergencies.

Despite some hopes for an improvement with Volodymyr Zelensky's rise to power, things in Kiev have not changed much. In the RWB report for 2020, Ukraine ranked 96th out of 180 countries. The Institute of Mass Media (IMI – Institut masovoi informacii) registered 229 cases of violations of freedom of speech, with the most common case being physical aggression against journalists (171), confirming the 2019 trend. The country did gain 6 positions compared to 2019, but this result is due "more to the worsening of the situation in other countries than to a real improvement of the situation” in Ukraine.

What the numbers and rankings often hide, in fact, is the context in which journalists find themselves working. What many in Ukraine denounce, for example, is a constant climate of impunity. As pointed out by Serhiy Tomilenko, representative of the National Union of Journalists, "crimes against journalists have become the norm", also due to the inability of the authorities to enforce justice, creating a climate of "systemic impunity". In 2018, for example, out of the 38 total cases brought before the courts, only 5 reached the verdict stage, with 1 suspect acquitted and the other 4 cases being status barred. The same trend was registered in 2019 and 2020.

The unsolved and politicised case of Pavel Šeremet, a Belarusian journalist killed in 2016, is perhaps the most famous example, but certainly not the only one. If Šeremet's death caused international uproar and the numerous political meddlings have cast a shadow over the investigation , there are other cases of which little or nothing is said. In May 2019, Vadym Komarov, an investigative journalist from Čerkasy, was hit with a hammer in the head in broad daylight and died 40 days later . Komarov was about to publish one of his investigations into procurement corruption involving some influential local politicians. The journalist had already received numerous threats and intimidation in the past. The investigations, so far, have given no result .

In recent years it has been precisely 'peripheral' investigative activists and journalists who have often paid the highest price for their work that went against the interests of powerful local barons (such as in the cases of Katerina Handzjuk in Cherson and Mykola Byko in Charkiv ).

But what is concerning, more generally, is the attitude of the current government towards journalists and the media. If former president Petro Porošenko and his allies had often been criticised for their open hostility towards some journalists and outlets, often defined as 'pro-Russian' only because they were critical of the government, little seems to have changed with the Zelensky presidency. For example, just a few months after its inauguration, the new president established the concerning practice of granting selective access to journalists during his numerous visits to the regions. Media and journalists who are more critical of the work of the People’s Servant (Sluha Narodu – Zelensky's party) are often find denied accreditation – tactics already used by Porošenko himself during the electoral campaign.

If the final approval of the law on media and disinformation, which had provoked harsh criticism from the OSCE and opposition from the journalists' union, was repeatedly postponed, the health emergency caused by the pandemic has reduced journalists' access to information and government documents. As a recent analysis by Freedom House points out, not only the introduction of the state of emergency, but also some regulatory acts introduced by the government (nº 2888 and nº 3660) have further complicated the work of journalists and their ability to monitor the government's action.

The dangers of 'patriotic journalism'

The problems, however, do not all come from above. Ukraine remains a wounded country, with part of its territory (Crimea) illegally annexed by Russia and a conflict that, although no longer in its hot phase, continues to tear apart some eastern regions. Such conflict and polarisation have not spared civil society and the media, even thousands of kilometres away from the line of fire. Over the years, the unhealthy idea of ​​'patriotic journalism' as a tool to counter Russian propaganda has made its way into the journalistic community and civil society . While former president Porošenko, with his nationalist rhetoric, had exploited this trend by splitting the media and journalists into 'good' and 'bad', there have not been many improvements during the Zelensky presidency.

Journalists and the media who have a critical stance towards the government or some of its policies (such as that on language, for example) remain under constant threat from activists or journalists themselves. As the secretary general of the European Federation of Journalists (EFJ) Ricardo Gutiérrez recently pointed out, also due to this trend "the level of violence against journalists remains very high in Ukraine" and perpetrators often go unpunished.

So, now it is hardly surprising when a journalist from NewsOne, a television channel belonging to a man very close to the Opposition Bloc (heir to the Party of Regions of fugitive former president Viktor Janukovyč), is attacked live and accused of being pro-Russian . Or when journalist Katerina Sergatskova is threatened with death, accused of being on the Kremlin payroll, and forced to flee the capital for publishing an article in which she exposed alleged links between a (patriotic) organisation that 'fights against Russian disinformation' (StopFake) and some elements of the far right .

Whether the threats and attacks come from 'activists' or other journalists on social media (as in the case of Katerina), what is most concerning is the lack of reaction from the authorities, as if everything were normal. As if the victims were to be blamed – because they were not patriotic enough or because they work for the 'wrong' outlet. It should perhaps come as no surprise, therefore, that according to some recent polls 74% of respondents think that the country is "moving in the wrong direction" and that if there were parliamentary elections tomorrow, the first party could be the Opposition Bloc, heir to fugitive Janukovyč and his friends.