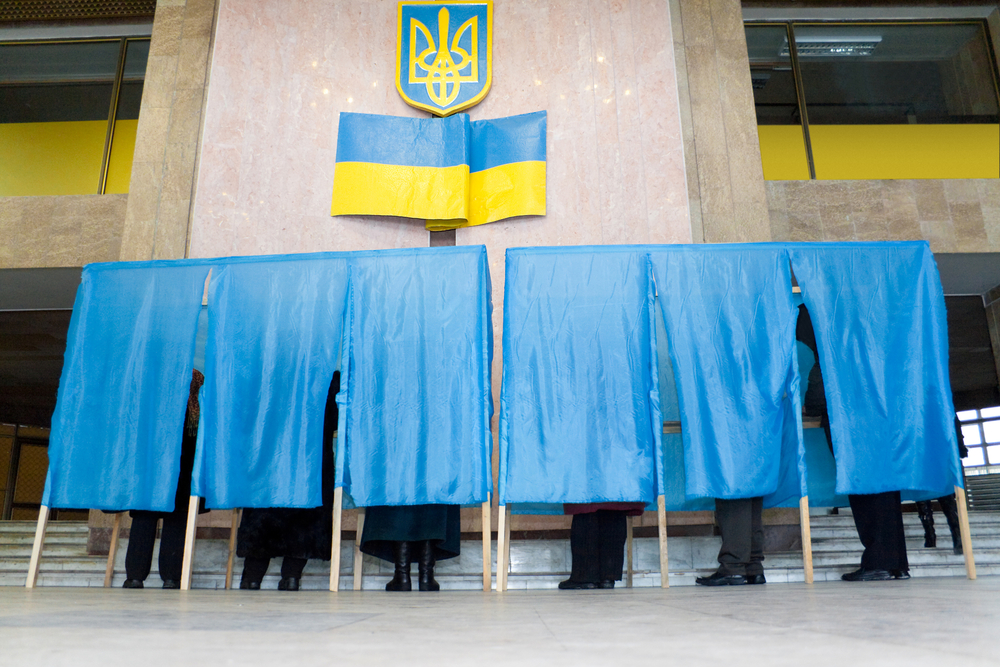 Thanks to the broad consensus gathered in the presidential elections, the new Ukrainian president Volodymyr Zelenskyj scheduled early political elections for next July 21st. His movement, "The servant of the people", is estimated to have a large advantage, but victory does not seem obvious

After taking office as president of the Ukrainian Republic on May 21st, Volodymyr Zelenskyj immediately announced the dissolution of parliament, the Verchovna Rada, and scheduled early elections. Despite the dissent of some parliamentarians, who appealed to the Constitutional Court to overturn the decree, Zelenskyj had his way: Ukrainians will be called to the polls on July 21st, instead of October 27th as originally planned.

Hard to make predictions about the outcome of the vote: the system in Ukraine is complex and the polls can be misleading. Zelenskyj's "The servant of the people" (Sluha narodu) is the favourite, but the results could surprise.

The Verchovna Rada is the only legislative body in Ukraine, a unicameral body that determines the guidelines of the country's domestic and foreign policy. Currently chaired by Andrij Parubij, it includes 450 deputies, elected every 5 years according to a mixed system: 225 seats with proportional system, with closed lists and at national level; the rest with a single majority in the local districts, where even one extra vote is enough to win. However, 225 majority seats will not be available this year, but 199. This is due to Russia's annexation of the Crimean peninsula in March 2014 and the occupation of the Donetsk (DNR) and Luhansk (LNR) regions.

It follows that only 424 total seats can currently be elected according to the laws in force, as 26 constituencies are not under the control of the Ukrainian government, but are occupied territories. The empty seats, therefore, will remain unrepresented, as already happened during the 2014 elections. About 12% of those formally entitled to vote are resident in the so-called "occupied territories".

The minimum electoral threshold to be reached to enter the Verchovna Rada is 5%; this means that probably only 5-7 parties will be able to make it out of the 22 competing (the last one to register is that of Mikheil Saakashvili ).

A recent survey (based, however, solely on the proportional system) has shown broad support for the party of the new president "The servant of the people", over 40%. A high percentage for a newly born political group, justified only by the great popularity of the president-actor. According to the same data, the pro-Russian party of Juriy Boyko and Viktor Medvedčuk "Opposition Platform-For Life" (Opozycijna platforma – Za Žyttja) would rank second with over 11%, followed by "Voice" (Holos) headed by rock star Svjatoslav Vakarčuk, "European Solidarity" (Evropejs’ka Solidarnist) of former president Petro Porošenko, and "Homeland" (Bat’kyvščyna) of former prime minister and presidential candidate Julija Tymošenko.

The Ukraine of change

Zelenskyj has probably planned these early elections since the day after the presidential victory. After taking office, during a meeting with the leaders of the various parliamentary groups, he justified his choice by citing the "low trust of Ukrainian citizens in the Verchovna Rada". For Zelenskj it is clearly important to capitalise on that 73% of consent received in April's presidential ballot: it would have been hard to maintain such popularity (that allowed him to take the place of former President Porošenko) until next October – the date originally planned for the political elections – living with a government that does not represent him. Furthermore, Ukraine is on paper a semi-presidential republic: the head of state needs a strong, united parliament. In this regard, Porošenko's coalition of 5 pro-European parties has secured a solid majority in the last 5 years.

The choice of early elections was strongly criticised by both the current government and most of the opposition. For many, early elections mean having little time to prepare, to design a good electoral campaign, and to create the coalitions necessary to secure a seat – all elements that favour Zelenskyj, just out of an effective presidential campaign.

Even the president's supporters – including Julija Tymošenko – cannot but benefit from early elections. Zelenskyj could find a good ally in “Homeland” to secure a parliamentary majority. An approach to the artist Vakarčuk is not to be ruled out, especially considering that the (basic) ideas of "The servant of the people" are similar to those of the singer: the will to change the system, to fight corruption, and govern with new people of spotless reputation. However, Vakarčuk says he does not aspire to power, but simply wants to make tangible changes in the Ukrainian political and social system.

Leader of one of the major Ukrainian rock bands, Okean El’zy, Svjatoslav Vakarčuk is a well-known figure in Ukraine, and not only in the musical sphere. Member of the Ukrainian parliament during Juščenko's government (2007-2008), he first supported the orange revolution and then the Euromaidan protests. Launching his new political party Holos (Voice), he firmly announced his intention to run in the early elections: "Today I want to start a new era in Ukrainian politics, with you. A new voice will be heard in Ukraine today. My voice. Your voice. Our voice. We have created a new political force... the Holos party".

His campaign has already registered several endorsements, probably due to the fact that he is a very popular character and that there is no lack of rock'n'roll  during his rallies. According to the polls, his support base has grown in recent weeks, especially among the younger electorate, giving great hope to the artist to be able to reach that coveted 5%. All that remains to be seen is whether the candidates on his party's list will collect the same results.

Petro Porošenko and the smaller parties

Despite the defeat in the presidential elections, Petro Porošenko declared that he had no intention of quitting politics and is now running with a completely renewed party. The first innovative step was the rebranding, from "Block of Petro Porošenko" (Blok Petra Porošenko) to "European Solidarity".

The party's main objective is to meet the criteria for submitting applications for Ukraine's entry into NATO and the EU and to become member by 2025-2027. Naturally, this goes hand in hand with the aim of keeping pro-Russian formations out of parliament. The "Opposition Platform-For Life" movement, already present in the Rada since 2014 with the "Opposition Block" group, appears to be well placed to come back and Boyko, fourth in the presidential elections with 11.67% of votes, appears to be very determined not to let go.

Even well-known politician Mikheil Saakashvili, ex-governor of the Odessa region and former president of Georgia, was able to register his party "Movement of new forces" (Ruch Novych Syl) at the last minute – despite having been deprived of his Ukrainian citizenship for over a year by decree of former President Petro Porošenko, a decision revoked by Zelenskyj in May. According to the electoral law, parliamentary candidates must be Ukrainian citizens and must have lived in Ukraine for at least five consecutive years. The administrative court has ruled that Saakašhvili has full right to participate in the elections.

Although many Ukrainians support his populist ideas, his party will probably not be able to reach the threshold. The same goes for the representatives of the far-right fringes (Svoboda, Pravij Sektor, Natskorpus) who decided to run as a single block, for Oleh Ljaško's radicals, for Anatolij Hrytsenko's "Civic Position" faction (Hromadjans'ka pozicija), and for "Ukrainian Strategy" (Ukrains'ka Stratehija) of former Prime Minister Volodymyr Grojsman, whose initiative does not seem to receive much attention from voters.

Ukrainian MPs will be subject to international election monitoring in order to guarantee further support for the country's democratisation process. However, following the recent readmission of the Russian Federation to the Parliamentary Assembly of the Council of Europe (PACE), spokesman of the Ukrainian parliament Andrij Parubij has withdrawn the invitation for the monitoring visit of a Council delegation. "Among the international observers there cannot be representatives of the aggressor country, Russia; they will not be observers, but agents of Putin's hybrid war", explains Parubij, adding that Russia's influence on the Ukrainian elections is unacceptable.

The response of President Liliane Maury Pasquier is reported on the PACE official website: “I must stress that Ukraine, as a member of the Council of Europe, is under the control of the Assembly and has the obligation to invite the Assembly to observe the presidential and parliamentary elections". Pasquier also declared she was willing to discuss in order to improve relations between the Assembly and the Ukrainian parliament and its delegation in PACE. Despite this, MP Volodymyr Ar'jev said that the Ukrainian delegation has already decided to leave the Assembly (together with the delegations of Estonia, Georgia, Latvia, Lithuania, Poland, and Slovakia).

The elections will be monitored by 310 observers from other 9 institutions and international organisations, such as OSCE's ODIHR mission, accredited and confirmed by the Central Electoral Commission of Ukraine. As for the presidential elections, there will be no Russian observers or from the Russian Federation.

According to some political analysts, voter turnout for these elections will be higher than usual and perhaps close to 60%, a record in Ukraine's electoral history. The credit probably goes to the successful campaigns of the parties of Zelenskyj and Vakarčuk, which attract the interest of the younger generations, usually unwilling to take part in the country's political life.