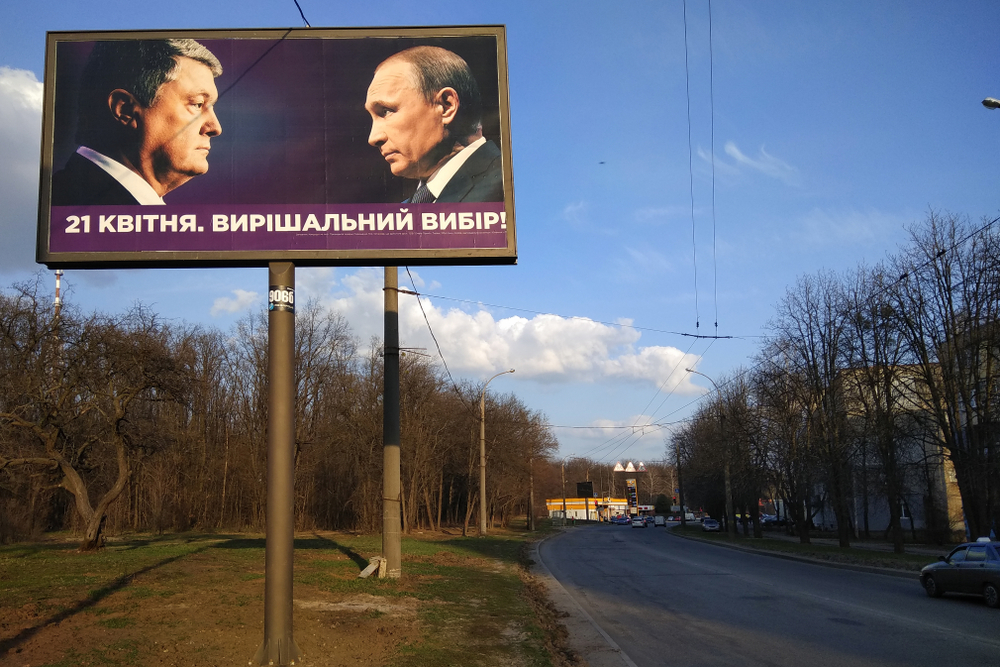 Before leaving the presidential chair to the newly elected Volodymyr Zelensky, Petro Porošenko signed a new language law – one that puts minority rights under strong pressure

(This article stems from an editorial collaboration between OBCT and EastJournal )

On May 20th Volodymyr Zelensky, elected in April with 73% of votes, officially took office as president of Ukraine. Before leaving his post, however, Petro Porošenko completed his term as president by signing on May 15th a controversial law under discussion in the Rada (the Ukrainian parliament) for some time – the law on language (law No. 5670-d), definitively approved on April 25th with 278 votes out of 450. However, over 2,000 changes and reworkings were necessary over the winter to convince the majority of deputies to pass the bill, approved in first reading last October 4th.

The new law deprives minority languages, including Russian (although never mentioned in the document – as opposed to English, which is cited as many as 18 times), of the status of regional languages, ​​and drastically limits their use in the public sphere. Rada spokesman Andrij Parubij called the law a matter of national security for the country.

Porošenko, once defeated in the presidential elections, had promised Ukrainians that he would have signed this law anyway, as soon as the Rada approved it: no sooner said than done. Language, along with faith and the army, was one of the three pillars of Porošenko's electoral campaign. According to the outgoing president, this law was necessary and "historic" for Ukraine.

However, the new president Zelensky has criticised the norm, as "the state must favour the development of the Ukrainian language through the creation of positive inputs and examples, not with prohibitions and sanctions". We'll see if in the coming months his presidency will actually choose to review this recent legislation on linguistic matters.

Why a law on language

Article 10 of the Ukrainian Constitution, in force since 1996, states that Ukrainian is the only official language of the country; at the same time, it guarantees the development, protection, and freedom of use of Russian and other national minority languages.

In 2012, however, the Janukovič government, backed by the Party of Regions at the time, introduced the concept of "regional language" for areas (regions or cities) where a minority of more than 10% of residents speaks a language other than Ukrainian. According to this provision, in these territories the regional language enjoys the same status as Ukrainian and can be used as a vehicular language in schools and local administrative bodies. Russian was consequently recognised as a "regional language" in the regions of Donetsk, Luhansk, Kharkiv, Zaporižžja, Cherson, Mykolaïv, Dnipro, Odessa, Crimea, and in some cities. The law signed by Janukovič was immediately strongly criticised by both the internal opposition and European bodies such as the Venice Commission.

Questioned especially in the aftermath of Euromaidan in 2014, this legislation was definitively decreed unconstitutional by the Ukrainian Constitutional Court in 2018.

Precisely for this reason, a new bill was introduced and passed by the Rada in April. A law that erases the concept of "regional language" and elevates Ukrainian to the single language allowed in the public sphere as well as a symbol of the state, the offense of which can also be punished by arrest.

What changes with the new law

The new law establishes the obligation to use the official language in public spheres; personal and religious contexts are not involved. It is mandatory for every citizen to know the Ukrainian language. For citizenship applications, the candidate will be required to pass a language test.

The president of the republic, members of the government, deputies, officials of the state bank, teachers, and doctors are obliged to use Ukrainian in the performance of their duties. In the realm of education, from 2023 Ukrainian will be the mandatory vehicular language for all schools starting from the fifth grade. Minority languages ​​are allowed in kindergartens and primary schools, and can be taught as disciplines within the school curriculum. As concerns universities, some subjects can be taught in English and in other official EU languages ​​(not in Russian).

It is not excluded that this latter specification may act as a peacemaker, especially with neighboring Hungary, which had previously criticised Ukraine's language directives on education. The question of the school language had already been addressed in 2017, and protests had risen from Budapest, Bucharest, Sofia, and Athens. Hungary in particular had defined the law as "semi-fascist", while on the other side Kiev had stigmatised the Hungarian policy of giving out passports like candy, especially in the Transcarpathian territory (in Ukraine, dual citizenship is not allowed). The scandal had intensified in September 2018 with the expulsion of the respective consuls from the country.

Beyond this controversy, the school question is indeed central in a country where, out of 3.8 million school-age children and teenagers, almost 400,000 are enrolled in institutions where Ukrainian is not the vehicular language. According to 2017 data, there are 580 Russian-language state schools (eight in Kiev only), around 70 in Romanian and Hungarian. The problems for these students are of a very practical nature and arise above all at the end of the course of studies, with a lack of knowledge of the official language useful in university or work placements. For example, in 2017, three-quarters of the Hungarian-speaking students from the Berehove region were insufficient in the Ukrainian test, the Education Minister Lilija Hrynevyč emphasised.

In addition, from 7 am to 10 pm, radio and television will have to broadcast 90% of content in Ukrainian. For local channels, a lower rate of 80% is expected. A particular exception involves events intended for a European public, like Eurovision. In addition, newspapers in languages ​​other than Ukrainian will have to publish also a Ukrainian edition. At newsstands and in bookshops, at least 50% of the editorial material on sale will have to be in Ukrainian (with the exception of stores specialising in foreign newspapers and books). It goes without saying that these new measures will put several media outlets (in particular newspapers with medium-low circulation) in great difficulty – not so much in front of their own public, but because of the limited economic capacities. It seems equally questionable that the launch of a Ukrainian edition could increase sales to the extent of making up for the costs of translation and printing.

On the web, sites with .ua domain will have to feature the Ukrainian version as the first interface page. The programmes and software must be in Ukrainian, English, or other official EU language.

Also 90% of films in theatres will have to be in Ukrainian (the remaining 10% will have to have Ukrainian subtitles and the same goes for theatrical performances). For singers, it will be possible to perform in another language. Event posters and flyers will always have to contain the Ukrainian version; in the case of more than one language, the Ukrainian translation must be reported in a font size equal to or greater than that of the other languages.

Furthermore, in Russian-speaking materials circulating in Ukraine, toponymy is also subject to change: denominations will no longer be translated into Russian, but transliterated from Ukrainian. Therefore, it will no longer be allowed to write Kiev in Russian (Киев), but Kyjiv (Кыйив); not Char’kov (арьков), but Kharkiv (аркив).

Overall, the package of measures launched by the Rada and signed by outgoing president Porošenko, while trying to fill a gap in the use of the state language in the country, on the other hand hardly hides a distinctly draconian character that will endanger many players in Ukraine's cultural and information sphere as well as seriously damage minority rights.

In fact, this law all but sums up, systematises, and strengthens a "linguistic" path that Porošenko's Ukraine has undertaken over the years. In addition to school regulations, quotas were introduced for Ukrainian music on radio in 2016 and on television programmes in 2017. This process has often sparked opposing nationalisms, spreading the questionable belief that there is an automatic correlation between spoken language and the speaker's political identity.

It is no coincidence that Zelensky, a Russian speaker, has criticised the law. The TV series that made him famous, "The servant of the people", was shot in Russian, and the Russian-speaking regions strongly supported him in the second round of the elections. Among the few points of Zelensky's electoral programme, moreover, there was precisely the creation of an information portal in Russian, to report Kiev's point of view to the inhabitants of the Donbass – an endeavour that the new law certainly made more complex. In his inaugural speech (also briefly speaking in Russian), Zelensky defined the resolution of the conflict in the eastern part of the country as a priority. It is, however, unlikely that the president will side too clearly with Russian speakers in the revision of this law.

On the other hand, Ukraine's legislative choices in the linguistic field are also the result of the profound, tragic forced Russification carried out in the country, first in the Tsarist era and then, especially, in the Soviet era. The strenuous search for and protection of linguistic dignity and autonomy are part of the attempt at emancipation, including political, from the eastern neighbour. The new law's focus on English and other European languages ​​should also be interpreted in a broader perspective in which Ukraine wants to place itself in the near future.