Turkey of refugees, among the Yazidis in Diyarbakır 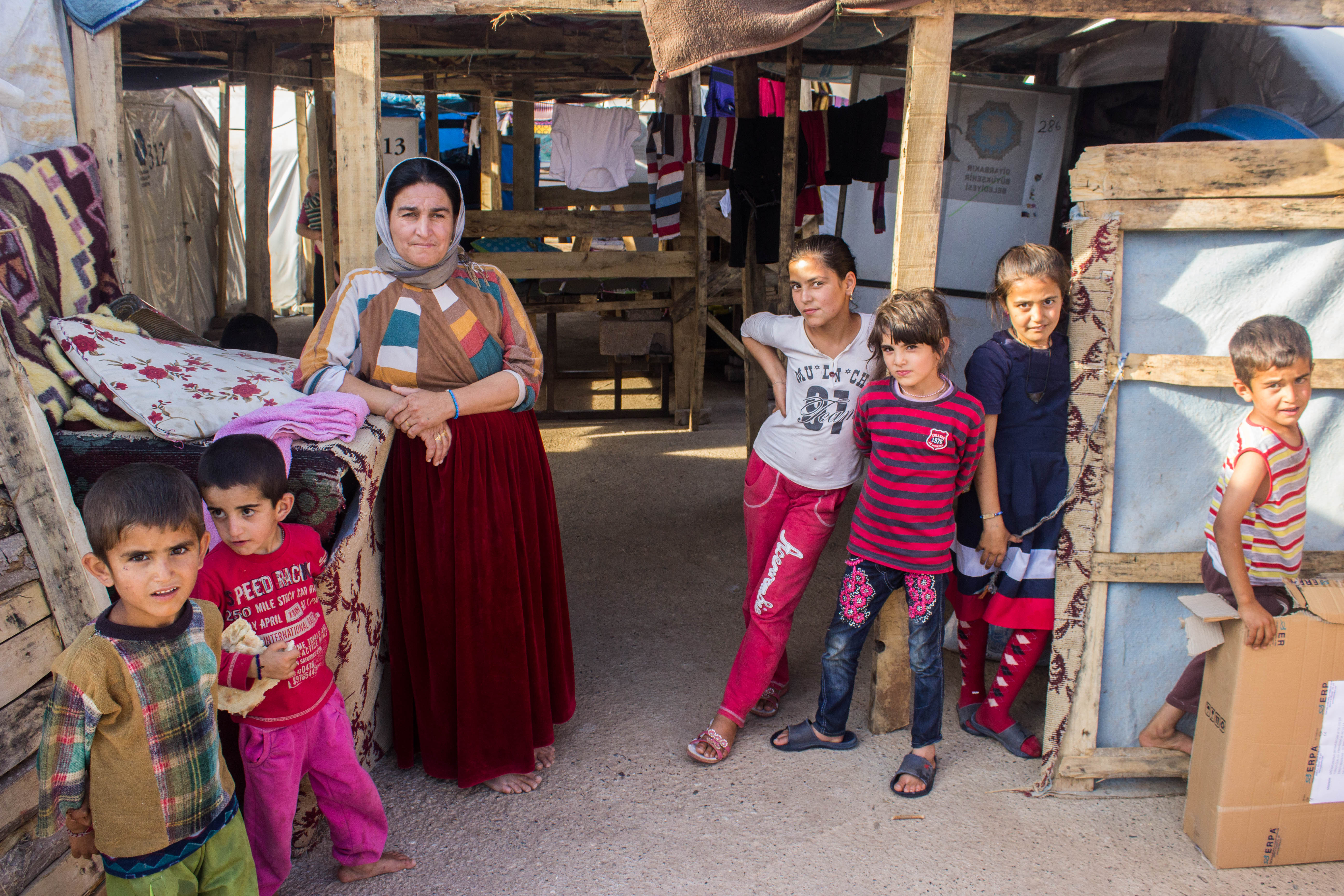 In Diyarbakır, southeastern Turkey, there are at least 20,000 refugees, including many Yazidis, who dream of reaching Europe. Second part of the report

In Diyarbakır, euphoria for the electoral results [of the parliamentary elections of June 7th, ed.] is still apparent in the HDP yellow, red, and green flags, waving placidly on countless windows, balconies, and shop entrances. The taxi driver indicates a corner at the intersection of two streets: "Bomb... babooom!", he goes, mimicking the explosion with his hands off the wheel. His story is confirmed by bent hurdles, blackened asphalt and cement, burned flags and some bunches of flowers. Euphoria is mixed with tension.

My meeting, however, is not about the recent elections: Rezan Kadr is the local head of Support to Life, a Turkish organisation that supports refugees from the war in Syria and Iraq. He welcomes me and my colleague Anna in the new location just outside the city: "We opened the place just a few months ago", he says winking toward the colourful balloons, never removed from the opening day.

Rezan is a Syrian refugee himself. As far as possible, StL seeks to hire people who personally experienced these events. This means offering employment opportunities, but also working with people who know how to approach refugees and build a relationship of trust with them. For those fleeing from war and despair, it is easier to rely on someone that shares their origins.

The conversation quickly shifts to the heart of the matter: "In Diyarbakır there are about 20,000 refugees, mostly Syrian Kurds and Yezidi Kurds from Iraq. We mainly deal with the latter. We have also initiated activities in the city of Batman, a few hours from here, where there are about 12,000 refugees".

The concerns are always the same – families need food, utensils, better comfort in the tents where they live, isolation from the winter cold, although at this time there is the opposite problem: with temperatures around 40 degrees for most of the day, the situation in shelters quickly becomes untenable.

Rezan confirms what Ayşe and Aysu told me in Istanbul, and adds more detail: "It all starts with registration – families are invited to join us in a set place and date; we distribute leaflets in areas known to be frequented by refugees, we rely a lot on word of mouth, it always works. So we create an archive in which we note the composition of each family, including the presence of the most vulnerable members such as minors or the elderly. Then we can proceed with the distribution of aid. Now we are trying to give families a pre-paid card, on which StL charges each month about 45 Turkish liras (€ 15) for each member of the family". This sum may seem small, but it is a lot in the local economy, where a kilo of rice costs less than a lira. Above all, it is a lot for those who have nothing.

The relationship with the administration

Rezan explains how it is not easy to work with local governments, especially here, where the work has just been launched and political logics and jealousies play their role: "For example, in Batman we were not granted the use of a school for registration procedures. School buildings are ideal to handle these operations, where you have to manage an influx of hundreds or thousands of people. We had to adapt, we rented a building normally used for funerals, at least it was roomy enough".

He also confirms that, even here, NGOs like StL operate outside municipal and government camps. "The problem is that institutions want to look good, but above all there is competition and animosity between the government and local authorities, that do not cooperate in any way, in fact they do the opposite. Local governments offer assistance to Kurds and ignore Syrian Arabs, while government agencies do just the opposite. Sometimes they even sabotage each other, spreading among refugees wrong or misleading information on camps. Politics is like that, so for the sake of StL and refugees we prefer to stay out of these games, or we would risk being swallowed up".

The ORSAM report spent many words on the absence of substantial problems between refugees and locals. I cannot but ask Rezan if this is the truth. "Actually, yes, at least here. We also tried to create committees, involving both muhtars (the local village leaders) and representatives of groups of refugees – a way to create common ground and solve any issue that may arise. The fact that locals and refugees belong to the same ethnic group sustains the feeling of solidarity: Kurds of Turkey support the struggle of Syrian Kurds in the cantons of Cizire, Kobanî, and Efrin and many left to actively fight the IS and other factions. The same applies to Yazidis, who are not just Kurds, but are considered the most authentic Kurds, those who have preserved pre-Islamic traditions".

In the Yazidi camps

The Yazidis, people who never converted to Islam and retain rituals linked to nature, the passage of time, and the sun, harbour much more distrust in the other groups. As they are considered unbelievers, they have suffered the worst treatment by radical Islamic militias: for example, women are captured and sold as slaves and concubines, which does not happen to women of Islamic faith.

The municipality of Diyarbakır has built a camp outside the city, a 30-minute drive, which hosts about 4,000 Yazidi refugees. Getting in there is almost impossible, many tell me, but fate smiles at me one afternoon, when I run into Mahmut Şimşek, who works for the city administration and whom I met just a few days ago: "There is a group of French who got 'permission to visit the camp. I can let you come along".

We are taken to the camp, a former picnic area that stands out for the green patch of trees in the middle of meadows yellowed by the sun. Guards at the entrance, fence and barbed wire all around. Inside, the looks of the refugees follow the cars and our faces behind the windows. At the centre of the camp there is the building which houses the head of the premises – it looks like a fort, surrounded by a wall, barbed wire, and vigilant electronic eyes. While we wait for the entrance gate to open, curious looks gather around us, especially children's, while an elderly man tries to teach them good manners and a young disabled girl approaches, asking for something, try to put her hands in someone's pockets. She is quickly turned away, harshly, by a little boy.

When we can finally enter, from the roof-terrace of the "fort" we can contemplate the extension of the camp: hundreds of white tents lined up, and between them a teeming humanity that tries to make sense of a life enclosed for months in a limbo of a few square kilometres. There are also sports facilities – a soccer field, a basketball court – once destined to those who came to enjoy the shade of the trees, now the only possible outlet for boredom and a sense of pointlessness.

"This camp was opened in August 2014, it was wanted by the HDP (the party that won the recent elections) in agreement with the council of Amed, and is managed by Rojava Kordinasyon", begins in an artificially official tone Sinan, who works here as a volunteer. "There are no other organisations working in the camp, all you see is paid by the local administration, without any contribution from the government", he is keen to point out right away. This statement will be somewhat mitigated on our way back, when I actually meet a UNHCR operator. "We set up a small doctor's office, but medicine stocks are little. There is also a school, with three active classes where we teach Kurdish and English". Out of 4,000 refugees hosted here, about 1,300 are of school age: though a valuable initiative, the school involves but a handful of them.

After this brief introduction, we are invited to start our visit, with the recommendation not to leave the main avenue and our guides. I am still wondering whether the recommendations stem from some kind of danger or rather secret, when the gate opens again and we are surrounded by a large group of people: rumours on the presence of "visitors" quickly spread.

"Why don't you tell about what's going on here, how we live here?", asks in an accusing tone a young man who, with his slightly broken English, was apparently appointed spokesman.

"We have been here for months, stuck, no one gives us answers or explains what will happen to us. But we want to get to Europe, we do not want to be here". His voice trembles with rage and frustration. "We do not trust others, too many times we have been betrayed. In Iraq we were promised protection, but when the IS army arrived, the Kurds retired and left us at their mercy. Everyone here has lost someone, their loved ones, their friends. We crossed Syria to escape violence, Turkey for us is only a step. But we cannot leave, we are stuck here, this is a prison".

Here they have food and a roof over their heads, "but what life is this?", he continues, as he describes how days flow by, monotonous and without prospects. "What future do we have in this place? Our children do not have a school, there is no doctor, no medicines, some of us would need to go to the hospital, even that we are not allowed. Sooner or later we will flee, there is no other way. We passed through Syria, we can cross also Turkey and reach Europe. That's the only safe place for us".

There is a doctor, actually – a young volunteer who tells us about the difficulty of the job. More staff is needed, he alone cannot do much for 4,000 people who obviously do not live in the best conditions, with obvious health repercussions. Frustration and apathy have their consequences too: a few weeks ago, a 15-year old girl took her own life. And then there are new births, because the cycle of life cannot afford to stop, ever, even in a place like this. One might ask what place these new lives born in the field will occupy, in a world that defines people first and foremost by citizenship and domicile.