Turkey of refugees, on the Syrian border 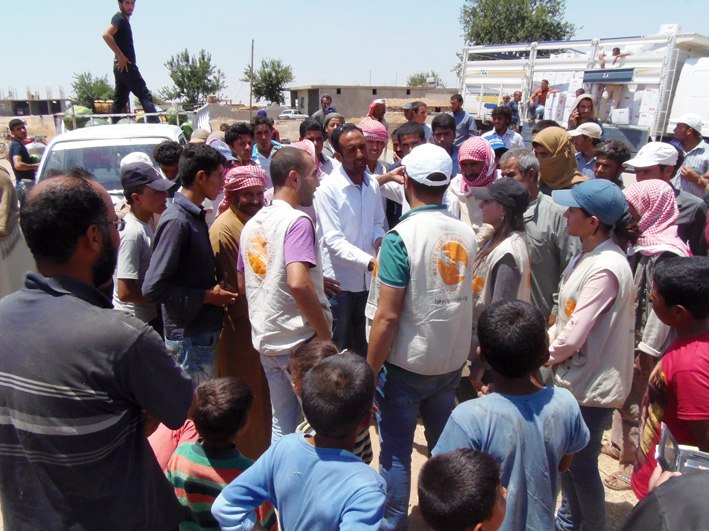 Akçakale, Suruç, villages and refugee camps on the Syrian border. Last steps of the journey in the Turkey of refugees. Third and final part of the report

Beyond the fences and gates, in the direction where the armored tanks of the Turkish army point their watchful eye, begins Syria. The first village is Tal Abyad, right on the border, which was recently in the spotlight of worldwide media: the Kurdish forces of YPG, its yellow flag with a red star waving at short distance, drove away the militias of the Islamic State, thus removing an important supply point for the IS.

"I do not really like this", says Halaf looking at the flag; he is a native of Akçakale, the last village in Turkish territory, and works for Turkish NGO Support to Life (StL). At my puzzled look, he explains: "It's not that I support the IS, but the land here is mainly inhabited by observant Arab families, and that flag seems to say 'Now we are here'. It is useless to hide the truth: this is a very religious area, many families here were fine with living under the IS rule, their life was not disrupted by the presence of the militia". I sense that the matter is actually much more complex, Halaf's is just one of many voices in the mosaic, and I plan to get back to the topic later. At the same time, I understand how the local ethnic fabric plays a fundamental role in the dynamics of war and, therefore, the situation of refugees.

Now the pass is almost deserted, except for about thirty people waiting to return to Syria. "You probably heard about it, violence in their area abated and now they hope to return to their homes", continues Halaf. They will wait until Turkey decides to reopen the border, but there is no schedule or procedure: it could happen in an hour, tonight, or not happen at all for days. The fact that now there are Kurds on the other side does not simplify things at all, given Ankara's mistrust (if not outright hostility) against them. Yet, only a few days earlier, thousands had opened a hole in the fence to escape the heavy fighting in Tal Abyad.

"Flows increase and decrease according to the trend of the clashes, but also according to who takes away a specific area from whom. Whenever a victorious armed militia settles down, it does so with the support of one or more families, that will then help in the management and control of the territory". Halaf reminds me that here family is not just made of immediate relatives, parents and children, but a tangle of relationships and loyalties that may end up involving hundreds or thousands of individuals.

"As a result, when the area is taken over by a new force, new leaders attempt to replace the families in command, while those who previously dominated are forced to leave to avoid the repression of the new winners. First there was the FSI (the Syrian Liberation Army, that first began the revolt against Assad), then came the IS, now the Kurds. Every time, we see new arrivals of refugees". Of course, not all flee because of old ties and complicity – most escape, simply and dramatically, to save their life.

On the way back to Şanlıurfa, the largest town in the area, on the left of the road we see a makeshift camp in a barren patch of dirt, in the middle of blocks of flats under construction, with tents erected with tarpaulins and carpets behind walls or vehicles. We stop to exchange a few words and take some pictures, but almost immediately a man comes out of a small building next to the camp and invites us to leave; he is a municipality employee tasked with supervising the area. Halaf points out that there are no toilets and asks whether it is possible to provide them. "I do not know, you have to ask the municipality for permits". 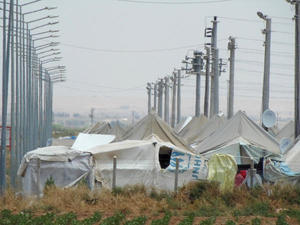 We continue the journey. Less than two kilometres away, on the opposite side of the road, there is the government camp of Akçakale, one of the largest in Turkey. In a forest of power lines and white tents standing out in the oppressive sun, the camp hosts about 50,000 refugees, all of Arab-Syrian ethnicity. Entrance is forbidden, even NGOs like Support to Life or Doctors Without Borders are not allowed to operate there, even if here and there I see the UNHCR logo. Halaf would rather not even pull over, to avoid the risk of being stopped and having issues with security. And if we cannot get in, refugees cannot get out for any reason – the feeling of imprisonment is intense at first sight.

Further west is the village of Suruç [recently the scene of a terrible attack attributed to the Islamic State, ed.], with Kurdish majority and ruled by the HDP, the party which scored an awaited victory in the last national elections. In this village there is a second camp, hosting about 40,000 Kurds from Kobani. Halaf explains, however, that "now it is almost empty, because many returned to the city, to their homes. Even StL, at the moment, does not have active projects there – then, who knows about tomorrow, with the speed at which things change here".

A camp for Arabs, a camp for Kurds – divisions are present even in this desperate situation, or perhaps precisely because of it.

StL's active projects include the distribution of aid in the villages scattered along the border. We leave early in the morning, the meeting point is Akçakale, where Halaf agreed with some Syrians to recruit a dozen compatriots to help. "Whenever possible, we prefer to employ Syrians", says Halaf, "it is another way to help them, to get them some money".

Unemployment, the loss of a job that now seems to belong to another life, is certainly one of the problems of refugees, especially those who support entire families, and black economy is a phenomenon that spreads easily in these emergency contexts.

"People here are highly nationalistic, as also seen in the recent elections; look, on every house waves a Turkish flag". Yet, ethnic Turks are a minority here. Most families are Arab, but the process of assimilation and cultural assimilation started with the founding of the Republic achieved its best results here, so much so that there is widespread contempt among local Arabs for Syrians as non-Turks.

This does not prevent them from being recruited as labourers in construction and, especially, local agriculture. "There is talk of 10 liras (just over 3 Euros) for 10 hours or more a day, a real pittance. We manage to pay them 40 liras (about 14 Euros). It's not much, but certainly more than they would earn elsewhere, and certainly less backbreaking work".

In earlier days, the families in the villages were warned of our arrival via SMS. Today kitchen utensils, as well as watermelons and melons, will be distributed. The driver, who comes from Hatay, would rather simply discharge and leave, go home. Temperatures are scorching and it is Ramadan period, which many observe: it means working all day in the hot sun, without food or water. It takes some convincing by those responsible to remind him of the agreements – aid must be distributed in the villages. 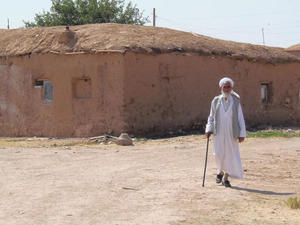 As soon as the trucks and cars get to the dusty border villages, where old houses of mud, straw, and dung are located beside the new ones in reinforced concrete, refugee families are quick to crowd around the vehicles that stop at the expected collection points.

There are more people than estimated, because also this week there have been new arrivals, but there is no aid for those who have not been registered by StL. It is not easy to make them accept that today they will not receive anything, they will have to wait a few days, until the next distribution. The participants of the expedition, also Syrians, have to resort to all the tricks of diplomacy to prevent the situation from degenerating.

I remember Rezan's words in Diyarbakır, when he insisted on the importance of having operators of Syrian origin and therefore able to manage relationships with families. Names and family members are registered, spirits are calmed by distributing some extra melon, that children raise on the head as if they were trophies.

I manage to exchange a few words with a young man of the village, the son of the local muhtar (head of the village), who came to atten the distribution: "We welcomed these families, gave them some of the empty houses and, when possible, we give them food; in exchange, they work in the fields of the village".

The agreement came from the dialogue between the muhtar'sson and the Syrian heads of family – once again, ancient clan dynamics re-emerge, this time not to divide, but to unite and strengthen the ties and obligations of hospitality, to overcome mistrust. Or perhaps simply because in the face of hunger, thirst, and despair, offering help is a sign of dignity and prestige.

"Will you go back to Syria?", I try to ask with the help of interpreters. The answer is yes, unequivocally and without hesitation, supported by a hope to find their homes still intact and return to work the land, reviving a thousand-year-old bond that war threatens to break up forever.

It is late afternoon when we get back on the vehicles to return to Şanlıurfa. An elderly man, covered in a long white dress and held up by a black cane, is walking along the dusty road. He strides forward in a slow, solemn pace, with an impassivity that stands out in my mind in contrast to the bustle of the day, the dozens of sad eyes and hungry, smiling mouths. A walk, a moment of normalcy in the chaos of war. I am not sure he is a refugee, but certainly he is finding shelter in a moment of precious simplicity that warrants respect.

Meanwhile, millions of people are fleeing, from Syria, Iraq, and many other countries torn by violence to Turkey, to Europe, to any place that offers them hope, shelter, security, survival. To do that they travel thousands of kilometres, in territories sometimes hospitable, often hostile like their inhabitants. It is certainly not a walk.