According to the latest UNHCR estimates, approximately 1.770,000 refugees have reached Turkey since 2011 to date. We devote a report to their situation in Istanbul, Diyarbakir, and Urfa. The first episode

Adnan exhales in a puff the smoke of his cigarette, his eyes turned to the people and cars rushing through the narrow, busy street in the neighbourhood of Tarlabaşı, in Istanbul. "I arrived in town a few days ago, in search of new buyers", he begins to tell. "After leaving Damascus four years ago, we re-opened the family business in Gaziantep. We trade in spices".

Adnan's family is one of those that, four years ago, had the means and contacts to leave Syria, a country where violence had begun to be brutal and widespread. In the early days of the tragedy, his family could be considered well-off compared to the hundreds of thousands of people who, in later years, would flee their homes with nothing but their instinct of survival. "Back to Syria? No. There is no longer any Syria", Adnan says in a low voice that betrays the effort of trying to accept a raw, painful truth.

According to the latest UNHCR estimates, approximately 1.770,000 refugees have reached Turkey from 2011 to date, plus about 100,000 from Iraq, another country wracked by war. Figures only report those who have been registered though, while unofficial estimates of various NGOs report that by now the number of refugees widely exceeded the threshold of 2.000,000: 3% of the entire population. These figures dwarf the so-called "invasion" in Europe and leave Turkey as the country that, along with Lebanon, has taken on most of the burden of the humanitarian tragedy resulted from the Syrian and Iraqi chaos, at a total cost to state coffers, calculated in November 2014, of 4,5 billion dollars.

The situation is made even more complicated by Ankara's policy choices. Refugees are not recognised as such, but as "guests", with a host program based on three principles: open borders to anyone who wants to find shelter, no forced repatriation, and registration by Turkish authorities with government support in the camps. However, only about 220,000 people are housed within this framework and even fewer are hosted by local authorities. This leaves most of them living on the streets of big cities or in the villages along the southern border.

The choice of the Turkish government, dictated by the desire to stay clear from international interference in the management of the Syrian crisis, has raised many eyebrows. The lack of refugee status makes it impossible to apply for asylum, leaving the majority of refugees in a legal limbo that turns camps into prisons.

In the context of such an emergency, the first priority is to provide refugees with basic necessities. Among the many NGOs working on the field in order to help refugees there is Support to Life (StL), a Turkish organisation with which OBC has worked in the past. Aslı Arslan works in the main office in Istanbul: "Support to Life operates in this city and others in the south like Diyarbakır, Batman, Şanlıurfa, and Hatay. We provide aid to those refugees who do not live in state or municipal camps, where NGOs cannot operate. We work with Syrian Arabs as well as Kurds and Yazidis – groups that, after years of conflict, have developed strong mutual resentment and a total lack of trust; rebuilding these relationships is part of our work, but above all the emergency forces us to deal with food, blankets, toilets – improving the conditions of the tents, often inadequate to face the harsh cold of winter. We have also initiated other activities, such as language teaching and counselling. These people carry the horrors of war and in order to try and start over they also need this kind of help – of course, after filling the belly". 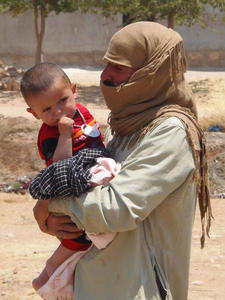 Over 300,000 refugees are estimated to reside in the metropolitan area of Istanbul. Since there are no camps, those who can live in rented houses, often in dilapidated condition; others stay in abandoned buildings or on the streets. Some are trying to rebuild their lives; some no longer have the strength and resources to continue, and live by their wits on the streets of the city. For many of them, however, Istanbul is just the latest stop on Turkish territory to the EU. They will attempt to cross the border with Bulgaria or Greece, and usually have relatives or friends waiting for them in Europe. Either way, these people do not plan to return to Syria.

Aysu Kiraç is StL's project manager in Istanbul: "Before offering our support, we identify the most vulnerable families on the basis of the presence of children, elderly, or disabled as well as the absence of sources of income. Given our limited budget, we target these groups. We launched a pilot project to provide each family with a prepaid card, on which we upload, on a monthly basis, money to shop for necessities in places we have an agreement with. The idea is that it is best to give families the freedom to decide what to buy and in what quantity, and at the same time to monitor them and ensure that the money is not spent on luxuries, but also to protect the family from those who tend to take advantage of the situation".

Aysu also tells us something about the relations with the government, not always easy. "Certainly there is a plan for cooperation, it is necessary to exchange information; all our activities must be approved by institutions and are the result of a long process of diplomacy and compromise. Recently, things have become a bit complicated, as the government issued a decree that prevents universities, media, and other organisations to do research on the situation of refugees without explicit ministerial permission. At the moment there is no possibility to apply, everything was suspended in view of the elections [the parliamentary elections of last June 7th, ed.], but I'm confident that soon communication channels will be re-opened".

A recent study by NGO ORSAM (Ortadoğu Stratejik Araştirmalar Merkezi – Centre for Strategic Middle Eastern Studies) analysed the consequences of the arrival of hundreds of thousands of people on the country's social and economic fabric. The report showed that, among the many difficulties, there can also be opportunities for economic development, and not only.

The conditions of extreme insecurity and poverty for refugees cause major social problems, including integration difficulties because of language differences; uncontrolled urban development linked to squatting in abandoned buildings or makeshift shelters; increase in the number of beggars; the risk of ghettoisation; long-term concerns about lack of access to the education system for young people and generally poor living conditions, which can potentially fuel crime.

However, the ORSAM report stresses the absence of significant violence, demonstrating how the various communities in the area have so far been able to establish good relations of cooperation. Police headquarters have not detected any significant increase in crime rates and Syrians, when involved, are generally the victims. Despite a thousand difficulties, the integration process has started: since the beginning of the war, over 35,000 people of Syrian origin were born in Turkey, marriages between Turks and Syrians are increasing, and more and more Syrians can speak Turkish.

Negative effects on the economy in areas with high concentration of refugees include soaring rents and inflation above the national average; an increase in illegal and child labour, particularly in construction, agriculture, and generally small business; unfair competition by companies that employ workers with no contract; and declining wages. Among the benefits, the report indicates that Syrian workers have filled a pre-existing demand for labour and have generally held positions unwanted by local people, dispelling the false perception of foreigners subtracting employment opportunities. Many domestic enterprises have been positively involved in aid management, especially in the food, pharmaceutical, and textile industries. Entrepreneurs from Syrian cities, Aleppo in particular, have transferred their activities to Turkey, as evidenced by the increase in assets owned by Syrians registered with chambers of commerce.

"StL has been deeply committed to contrast the exploitation of child labour", continues Aslı. "We have tried to get the support of institutions and other NGOs to monitor and combat the phenomenon. However, we have obtained the best results in the field with income support and welfare for families. After all, no parents send their children to work, if they can avoid it: it is desperation to push children onto the streets and into the fields".

Efforts are also made, so far with few results, to support education. Schools and universities are paths to personal growth and social integration, sources of hope for a generation that, after seeing their past and their present crumble between the bombs, might not have any future either. A major problem, considering that young people of school age (5-17 years) represent one third of the total number of refugees.

One of the few happy notes so far concerns Turkish universities, which accept students previously enrolled in Syrian universities, allowing the continuation of studies. However, students must produce suitable documents as proof of their academic career.

The situation of millions of people fleeing from a country devastated by four years of chaos, war, and violence appears therefore dramatic. On the one hand, there is the need to answer the most basic needs – food, clothes, housing; on the other hand, the issue of a future difficult to predict or even to imagine.