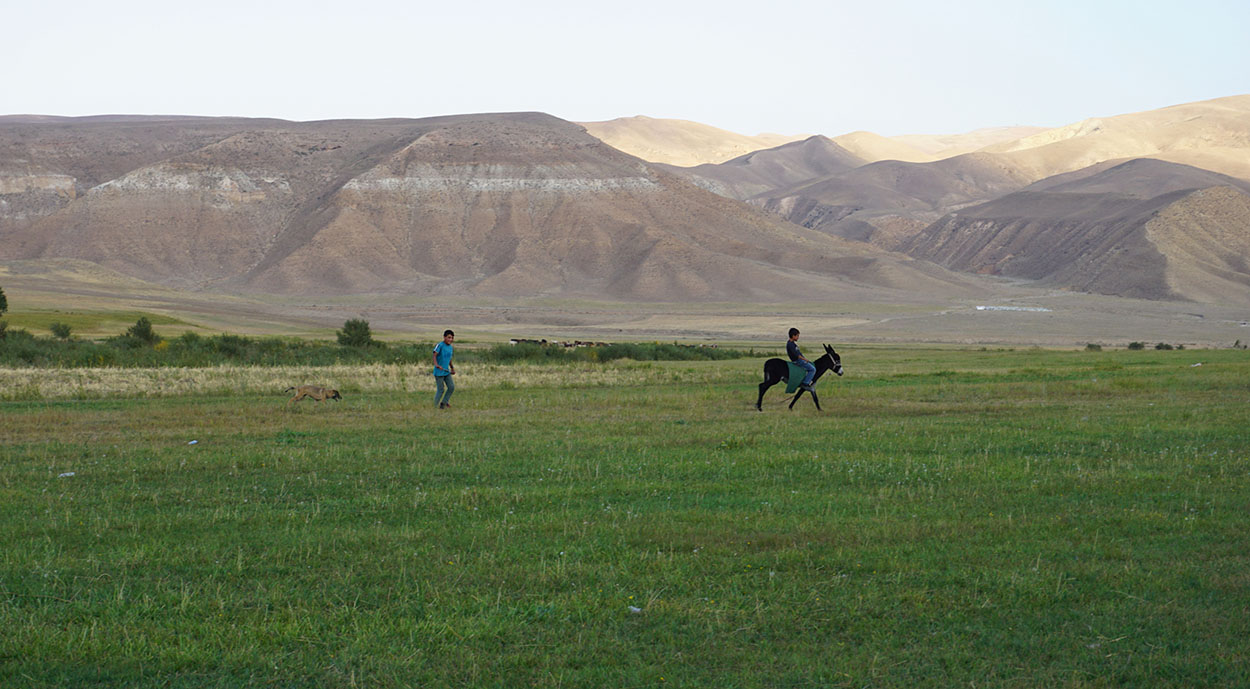 On the borders with Iran and Syria, the Ankara government is building one wall after another in order to reaffirm border control and stop migrants, jihadists, and smugglers. A reportage by our correspondent

Reaching the border took several hours by car, leaving the asphalt of the main road for the dirt roads that cut the fields of short grass, where you can see some cows and flocks of sheep, grazing. The bare slopes of the mountains stand out against the clear blue of the sky and the green of the valley. The village is a small mound of dusty houses with peeling walls, the carcass of a van rotting in the mud, piles of manure bricks piled up waiting to be burnt in the stoves, during the next winter.

We park in the yard and a bony dog comes forward, sniffing the air, followed by the intrigued faces of children. They are the youngest children of Rezan*, who appears last, limping. We sit on the lawn behind the house, drinking strong broad-leaf tea. Everyone's gaze runs to the peaks to the east: the border. Beyond the border, Iran. Rezan crossed it hundreds of times – he used to be a smuggler.

Walls on the borders

Along the same border, a little further to the north, Turkey is building a 144-kilometre wall in the provinces of Ağrı, Iğdır, and Van. Much further south, where Syria begins, an identical wall has already been completed: 700 kilometres of concrete, metal nets, cameras, and motion sensors. Works are entrusted to the public body for construction development "Toki". Ankara is determined to reaffirm at all costs control over a border that appears fragile in the midst of the Middle East wars and unrest.

The walls are meant to stop the flows of migrants and the trafficking of human beings; the transit of the Kurdish PKK guerrillas, who have been fighting with the central state for forty years; and the flow of smuggled goods from one village to another. Newspapers close to the government say that Turkey wants to protect what is also Europe's outer border.

"But paths, villages, and families are more ancient than any border", Rezan comments quietly, once his reticence to speak is won. And he explains that, when a border is traced on the map, it severs centuries-old bonds and makes illegal what was previously natural.

Rezan has no relatives in the Kurdish villages in Iran, but many of the families who live in the village do. Fifty of these families used to live in the village, but life around here has always been tough, the winters harsh. Now, the state's will to clear the region and get people to move to the cities – willingly or not – is adding up.

Rezan became a smuggler at the age of 16, walking the 15 kilometres that separate the village from the border almost every day, leading the mules with the reins in his hands. He brought to Iran pistachios and processed skins, came back with cigarettes, sugar, tea, and diesel. He points to the blue stems lined up along the outer wall of the house, the plastic discoloured by time. He says that there was not much of a choice – the land here does not give enough for the many Kurdish families, and to raise animals is not easy. "Also because the soldiers attacked the beasts, by killing or burning".

Rezan tells us that soldiers often came to the village and those nearby, because they knew that almost everyone was involved in smuggling, or because they thought they were going to find someone from the PKK guerrillas. But guerrillas never stopped in the village, as they did not want to endanger the population, knowing that the army would go hard on anyone that helped them.

Several times the soldiers halted Rezan along the paths, often beating him for the three barrels of diesel he carried. Once, he says, they even shot him with a bazooka. The friend who was with him died – he became one of the "martyrs of bread", as the victims of this hard, sometimes ruthless trade are called here. Many smugglers have died like that, sometimes even bombed by airplanes, like in Roboski, when 34 died. Rezan survived, but he was injured in the legs.

He did end up in prison for 15 years, an experience that has left him more than a scar, in the body and in the spirit. Once out, he quit. His eldest children have long been in Istanbul, where they work in the textile industry for 700/800 liras per month (around 150-180 Euros).

The end of a world?

I ask him if he knows about the wall and if indeed – according to him – it will stop smuggling in the region. Rezan thinks that small smuggling has almost disappeared – too many people have left these valleys and no one is willing to take the risk of travelling on the back of a mule anymore. For those who still do, exchanging goods will become an impossible enterprise, and the families living in villages straddling the border will become even more separated. Local newspapers, close to the Kurdish movement, already report discontent and protests.

According to Rezan, however, the real smuggling – that involves millions of liras – uses the trucks shuttling between Istanbul and Tehran, that pass unscathed through the official crossing points thanks to tricks and the corruption of customs guards. A wall will not stop those smugglers. Rezan is convinced that, in the end, the real reason for the wall is the will to divide even more what once was united.

* Rezan is a fantasy name