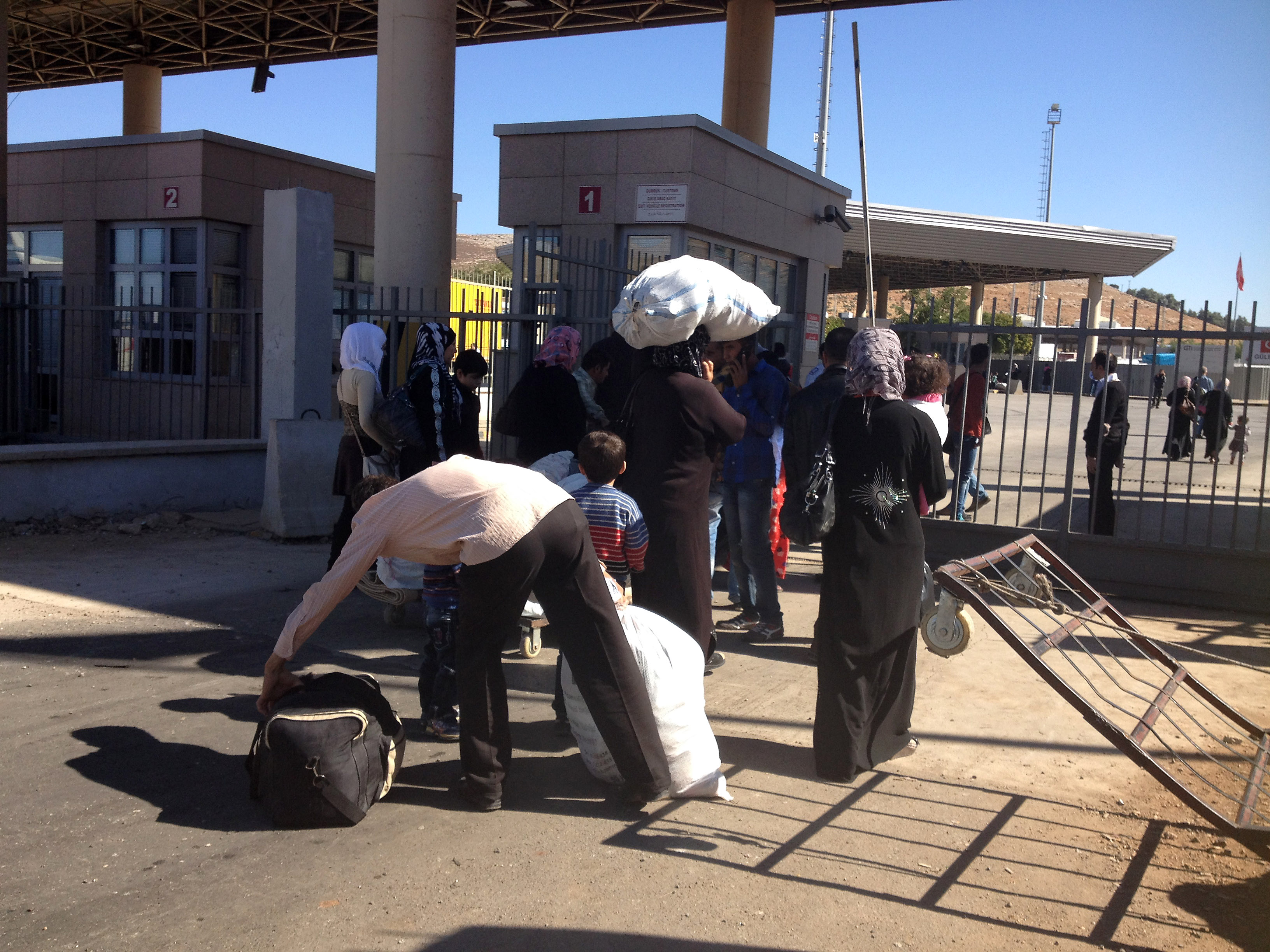 The border in Cilvegözü (photo A. Gilabert)

Over 600 thousand Syrians, fleeing the war, arrived in Turkey. Most of them are in the Hatay province. Our report from Reyhanlı

Reyhanlı – Turkish province of Hatay, a few kilometres from the Syrian border. Since about three years ago, when the war began in Syria, the presence of refugees has become a constant of this town. In 2011, its population numbered just over 62,000 souls – in the past two years, it has almost doubled, which directly reflects the steady increase of Syrians reaching Turkey, whose number, according to the latest estimates, has exceeded 600,000.

Mahmoud – 20, green eyes, and the calmness of an old man – is a native of Aleppo. He tells his story in broken Turkish, in a shop that sells pizza and börek, showing the wounds from the bombing on his legs, arm, belly. He arrived in Turkey about a month ago. He found work in Gaziantep, but he is momentarily in Reyhanlı to see relatives, on the occasion of the feast of sacrifice. "There is nobody left in Syria. Brother, sister, mother, all gone”. The bombings killed nearly every male member of his family. They wanted to enlist him in the army, but he ran. He says al Assad is "Şeytan", Satan. He'll be back in Syria once everything is over and al Assad is gone. But he cannot say when – just that "Allah is great".

About 910 km from the Turkish-Syrian border, only 3 out of 13 border crossings are currently open. Cilvegözü, 5 kilometres from Reyhanlı, is one of these. The Bab al Hawa gateway, on the Syrian side, has been under the control of the Syrian Free Army since July 2012. For "security reasons", the exit from Turkey is officially allowed only to Syrians. Many of them walk through the gates, carrying some luggage or bag.

Last October, during the Feast of Sacrifice, the daily in-s and out-s were approximately 1,600, compared to the usual 1,000. Even in times of war, festivities remain for many a time of reunion with family members who live not only in Reyhanlı, but in most of the Hatay region and in many other centres of south-eastern Turkey. 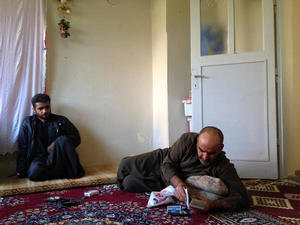 But not everyone has been visiting relatives. Hassan's family, a pregnant wife and four children, decided to return to their town in the province of Hama after trying in vain, for twelve days, to find an accommodation. The man, in his thirties, who used to be a municipality official before the war, said he was in Gaziantep, but did not find a place in the refugee camps, nor was he able to rent a house with the few resources available. In Syria, they lived in a village with a population of 30,000 people – now, there are only 500 inhabitants left. The place was almost entirely destroyed by the bombings, there is no way to count the friends and relatives lost. But "there's nothing to do", says Hassan with dignity, "we are forced to return to Syria".

The Turkish state provided 21 tent-cities for Syrian refugees, all located along the border. But their reception capacity of 200,000 people is no longer sufficient to accommodate the hundreds of thousands Syrians who are already in Turkey and keep flowing in. The housing issue is particularly felt in Reyhanlı, where rents have sky-rocketed. Many Syrian families, usually with many children, can only afford them by living together.

"Until a couple of years ago, the most beautiful house in town could be rented at 400 Turkish Liras per month", says a restaurant owner, "now the same apartment costs 1,000" (about 400 Euros). Another trader, owner of several stores, says that the minimum price for a "normal" house starts from 500 £. "Otherwise", he explains, "some owners clear and rent farm stables". The growing demand for real estate provides an explanation for the many buildings, new or under construction, located close to the city centre. Despite the exorbitant prices, it is indeed very difficult, if not impossible, to find accommodation in Reyhanlı.

The local population now seems to have accepted the presence of the "guests" and easily communicates with them, since a good portion of the people of the region is bilingual (Arabic-Turkish). Last May, the explosion of two car bombs that killed 52 people, leaving 146 injured, created a moment of serious tension. Attacked by the locals, who blamed them for the tragedy, hundreds of refugees have returned to Syria. "Many left, but many others have arrived since", comments a young street vendor, "the only difference is that now they keep a lower profile, they try to be less visible".

In addition to the increase in house prices, citizens of Reyhanlı also complain that, with the arrival of the Syrians, the price of food and clothing has increased and work tends to be scarce. In town there are just some small factories, including several used for the processing of cotton, the area's main crop. For Turks, they say, it has become even more difficult to work in the construction sites. "The daily pay of a local worker is 30 pounds, while Syrians settle for a third", says a young man. Alternatively, there are those who get by selling smuggled diesel and cigarettes brought in from Syria, making porterage, or working at the market or in stores.

Massoud is the father of a family of nine. In the two-room flat they rented, he is temporarily hosting another Syrian family, former neighbours in Hama. This is not the first time, "we are all in the same situation of disgrace", he says, counting the beads of a rosary. His confidence partly reveals the wealth he enjoyed until some time ago as a landowner. When a bombing completely destroyed his home, he also had to witness the harrowing scene of a neighbour collecting the pieces of his child.

Had it been for him, he says, he would never have left Syria – he did it for the children. “We got here over a year ago and initially, having enough money, we went to live in a big house. But now the money has almost run out and that's why we had to move in this one bedroom apartment", he explains. As he speaks, in the centre of one of the two rooms furnished only with mattresses, pillows, and rugs, lays a large platter of rice for guests, always treated in the best way, even in the toughest conditions. The cook is the lady of the house. In Syria, she was a gym teacher. One of the older daughters attends one of the schools run by Syrians in Reyhanlı.

When the money runs out, Massoud fully intends to return to Syria. He adds he has never thought of going to another country, whether in Europe or Egypt. "From here I can see my land", he explains. 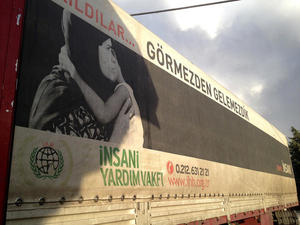 With winter around the corner, while some struggle to survive in Turkey, others send aid to those who remained in Syria. The NGO Islamic Humanitarian Aid, known to the general public for the episode of the Freedom Flottilia in Gaza in 2010, is one of the most active organizations in Reyhanlı. Every day, it sends to Syria 6 or 7 trains, each containing 27 tons of food and health packages, as well as specific kits for babies and bread.

Adjacent to the warehouse where the goods arrive and are dispatched to the four corners of Syria, a factory produces about 200 thousand loafs of bread per day, made with flour donated by Qatar. The NGO leaders explain, without further detail, that funding comes from both Turkish and foreign donors. The Turkish government grants them some facilitations at the border: their trucks arrive to the buffer zone between the two passages where parcels are transferred. In Syria, fifty local NGOs support them in the distribution of aid materials. The process, specify the operators of the foundation, is carefully followed and documented at every stage – they also add that, as much as they can send food, blankets, and healthcare aids, they can never meet the needs of the population.

An important presence in Reyhanlı is also that of several organisations of American doctors of Syrian origin, active in providing relief to the war-wounded in hospitals activated ad hoc. Maria del Mar, 24, a young dentist living in Barcelona, volunteers in one of these health centres, founded by a doctor in Boston. She says she became aware of the structure by chance, while flipping through a medical journal, and decided to help as best as she could. The hospital where she works has seventy beds to care for the wounded and maimed. "Refugee camps in Turkey, compared with those in Lebanon, Jordan, and Iraq, are better. They have toilets, everything you need", she says. "But it is a tragedy that, in the face of such brutality, the United Nations are not doing anything. But what should be done is not to build other camps, but to stop the war", she adds. Then, like a ray of sunshine, she shares the best memory from her experience in Reyhanlı: "So many people have taught me how open Syria was before the war, how people of all religions lived together in peace and no one came to ask what your belief was. But no one ever talks about this on TV". And the worst: "The images of innocent children who because of this war lost their legs, arms, and were left without parents and siblings”.