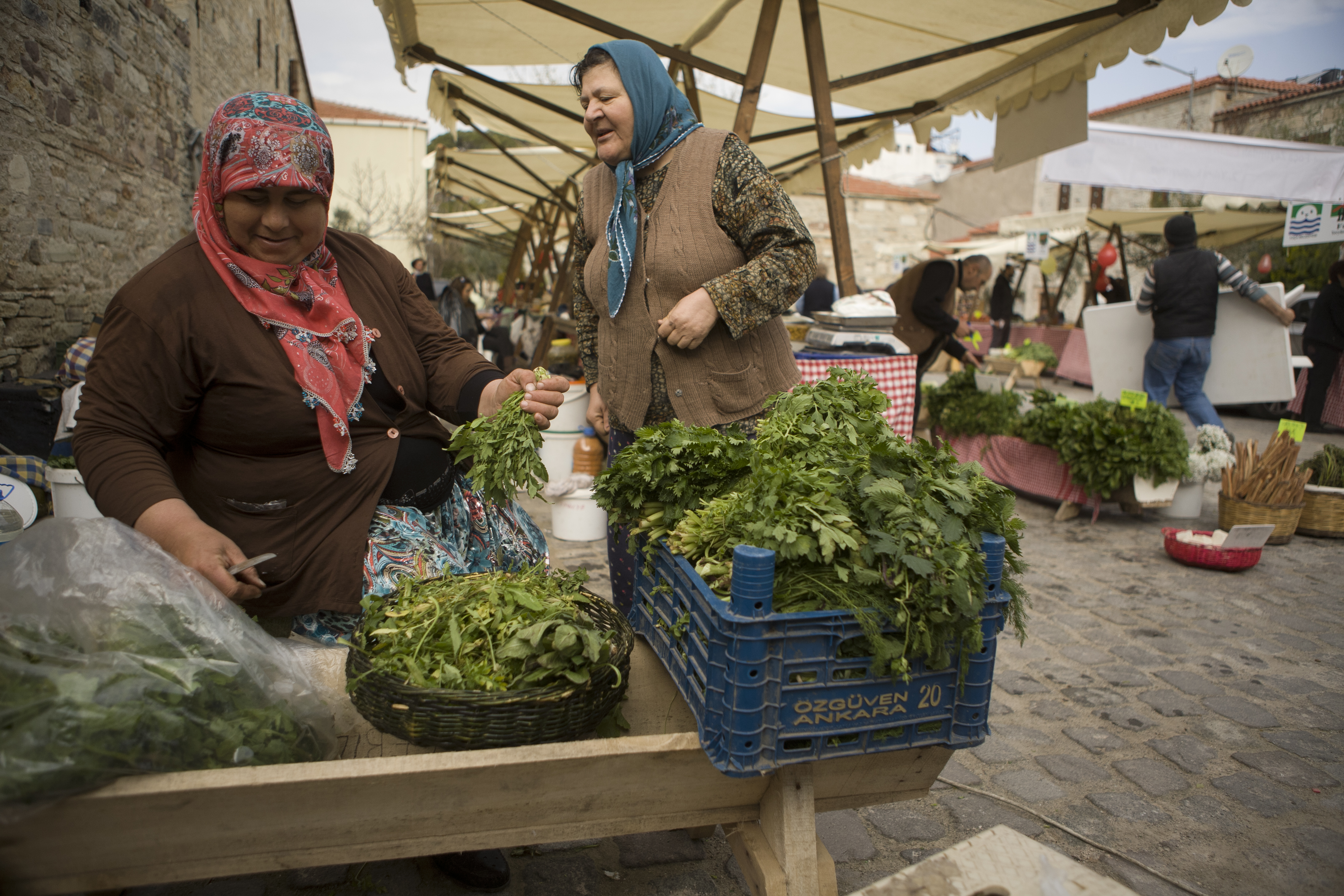 Foça: the Market of the Land (photo Ivo Danchev)

At Foça, on Turkey's Aegean coast, there's a market with a magical miscellany of colours, aromas and flavours. Among the treasures displayed on the stalls you can find the “tarhana”, distilled from the generous abundance of summer

White. Aromatic little bricks of home-made soap; pot-bellied bags of glossy beans, billowing, fleshy cauliflowers, pine nuts giving off scents of resin and the sea. Red.Tall jars of luscious pepper sauce; juicy beetroot in shades of brown, pomegranates with their seeds in serried ranks. Orange. Pumpkins with their solid pulp; jars of marmalade brilliant as a kaleidoscope. Yellow. The amber honey of lavender, olive oil thick as gold, the tart freshness of lemons. But above all Green: an intense symphony of the Mediterranean spring, knowingly and devotedly harvested – from the bitter sorrel (kuzukulagi) to the coarse thistle (sevketi bostan), taraxacum, broad beans and the humble wild chard (deli pazi).

Colours upon colours upon colours. The “Earth Market” in Foça (Turkey), Focea of Ancient Greece, opens its petals to the freshness of the morning, little by little filling the square paved with brown slabs. With measured movements, the stalls are set up and filled. Then the final touches of flowers and balloons. Time to sip a glass of tea. No hurry. The customers will appear. Just beyond, beyond the low stone houses with their shutters in pastel shades, shines the silvery Aegean sea, calm in the deep bay which protects the port.

“When we began, two years ago, there were no more than two or three stalls in a small outlying square. Over time the 'Earth Market' in Foça has grown. And it has changed.” Gul Girismen describes its evolution as his hands carefully stack the jars of lemon and quince jam. Moving to Foça to get away from the pace of life in Istanbul, the megalopolis which knows no rest, Gul was the one to light the spark which in 2012 led to the creation of the market.

“The idea is simple: it gives smallholders the chance to sell directly, without intermediaries.” To put it briefly, the market has become a unique opportunity to recreate that relationship of trust between who produces and who wishes to consume “locally and seasonally”, as the motto of the market goes. Now, having completed its second year, it hopes to introduce a new economic, cultural and educational initiative with a project for the conservation and cultivation of indigenous seeds working with some primary schools and the local prison.

Maybe it's not by chance that the land market has caught on so successfully at Foça, a primordial home of trade. In ancient times, Herodotus recounted, the inhabitants of this very old Greek colony were the first to take on the Mediterranean in search of trade and adventure, travelling as far as Marseilles and Spain.

The journey for participants in the Earth Market may be less epic, but no less adventurous in its own way. Like the one Gulseren Sen undertakes every Sunday from her village Helvaci to the market square. First twenty kilometres on foot before getting the bus, leaving at first light and returning at sunset, incredibly laden with her produce and armed only with her infectious energy.

One of the items she brings, that she is proudest of, is her “tarhana”. It's difficult to describe to anyone who has never seen it – a real distillation of summer's abundance, dried and put by during the cold months. Gulseren's contains wheat flour, sheep's milk and yoghurt, tomatoes and onions, peppermint and parsley. Reduced to a paste, it's stirred for days before being dried in the sun and broken up into reddish irregular pieces.

“Tarhana is a quick dish, but tasty. Just dissolve it in water or chicken broth, and add it to a salca (a thick sauce of peppers and tomatoes). Stirring it over a low flame, it's ready in a flash” smiles Gulseren, artfully. In reality tarhana is a hymn to diversity: not only in Turkey do its preparation and consumption vary from region to region, even village to village, but each family makes it in a different, unrepeatable way, handing on their recipes from one generation to the next.

Gulseren however is convinced no tarhana recipe in the world can beat hers. “Come to the Foça market, take my tarhana and eat it for lunch 'Aegean style' with olives and pickles”, she says, making her voice resound on the slabs of the square. “You can go round the whole of Turkey – you'll never find one the same.”