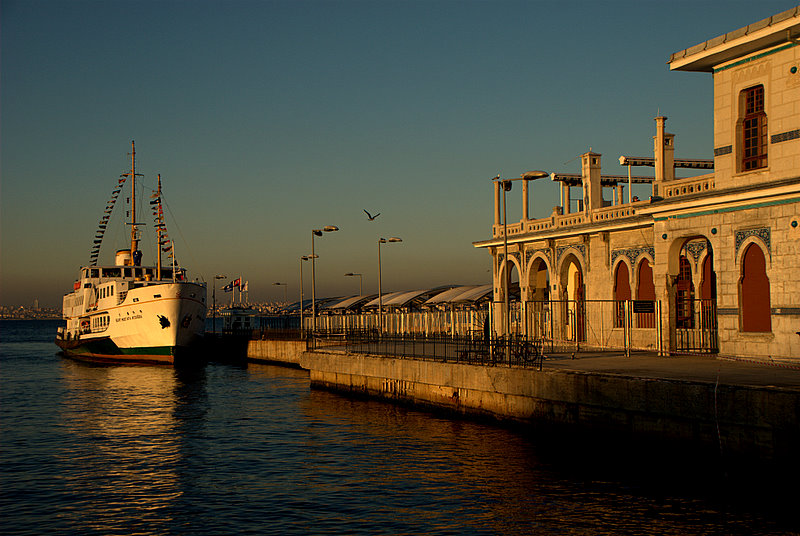 On the Büyükada pier

A few kilometres off the coast of Istanbul, in the Sea of Marmara, the Princes' Islands are the tourist destination for those who want to leave behind, at least for a few hours, the frenzy of the immense metropolis on the Bosporus. These islands have been for millennia a laboratory of cultural contamination, as testified by recipes, smells, tastes, and words – suspended between memory and oblivion

Kinaliada, Burgazada, Heybeliada, and finally Büyükada, the largest of Princes' Islands – the foaming wake of the ferry departed from Kabataş, on the European shore of the Bosporus, slips them one by one, like beads on a long necklace surrounded by the sparkling blue of the Marmara Sea. Here the ship, rocked by the wind, docks at the unadorned pier and hundreds of tourists descend along the battered, yet still elegant “Iskele”, the maritime station, decorated with turquoise tiles.

The Princes' Islands, or simply "the islands" (Adalar), are a small archipelago located an hour of boat from Istanbul, across its Asian shore. Their long history is intimately linked to that of the city of Constantine, who later became the capital of the sultans. Over time, as in the rest of the Ottoman Empire, the islands have become a melting pot of different ethnicities, cultures, and religions: Greek, Turkish, Armenian, Alevi, Jewish. Over the centuries, that meeting stemmed a unique synthesis, as varied as the colourful bazaars (Carsi) that still stun and fascinate millions of visitors. A mix of beliefs and traditions, but also languages, flavours, and fragrances.

With the collapse of the Sublime Porte, that multicoloured world, made of contamination and eclecticism, largely disappeared, except for a few small pockets. The most vital one, that miraculously survived up to the present day, is precisely that of the Princes' Islands, where sounds and flavours of a fragile and precious past now face a new challenge, that of globalised modernity. In recent decades Istanbul has literally exploded, rising from two million inhabitants in 1970 to over 13 million in 2010. A real earthquake, capable of shaking balances and erasing centuries-old heritages.

"Starting with food. And language. The idea is simple and true. Food and language are the deep connections that bind people to the earth, to their identity. To preserve the unique heritage of the Princes' Islands, this is the key. Also because the language-food pairing is the thread that binds all the islanders, regardless of religion and ethnicity".

Aylin Oney Tan, a long-time architect specialising in historic monuments, is now one of the best-known experts in culinary culture of Turkey and lives in Ankara, where she chairs the local Convivium, and the Princes' Islands. She is the soul of a community of educators and promoters of multicultural food traditions of the Islands, created to protect flavours and words that are likely to disappear forever.

"When the municipality built a museum on Büyükada, we took the plunge and worked to create a section on food and language. We reconstructed the cycle of religious holidays – Muslim, Orthodox, Catholic, Jewish, and Alevi – and the dishes that characterise them. What has emerged is an extraordinary picture of ties and syncretism".

The most striking example involves the most simple and basic element you can find on your plate: wheat. Dishes based on wheat mark rites of passage and seasonal rites in all cultures of the islands. The dis buğdayı, sweet corn boiled and sweetened with sugar or honey or grape molasses, sprinkled with cinnamon and chopped nuts, is used in the Turkish-Muslim tradition to celebrate a child's first tooth.

A very similar pie, koliva, is prepared by the Greeks to mark another, sadder passage – it is cooked for Ton Psihon, the Day of the Dead. The Armenian community has its own sweet corn, the 'anus abur, decorated with pomegranate seeds and scented with essence of roses, that accompanies any celebration of Christmas or the New Year. The Jewish Sephardic version, called t Koço line, is served for the feast of the trees of Tu Bishvat along with dried fruits, nuts, dried figs, dates, and olives.

The very Sephardic community, arrived to Istanbul with the expulsion of Jews from Spain in 1492, gave birth to some of the most amazing and delicious fusions. "My people brought with them only two things, the language of the fathers and the recipes of the mothers, that mingled here with local ones", says Selin Rozanes, Slow Food member and founder of the Turkish Flavours. From the recipes that Selin shows me, peep unique creations like dulse de kayesi (sweet kayısı – Turkish for “apricot”) or burekos de igo, a delicacy made of figs stuffed with walnut, where the Turkish word borek (used to indicate savoury fillings) meets with the Hebrew-Spanish igo (fig).

Even the plots between Armenian and Turkish traditions run deep, with unexpected twists. "The most important community cookbook, the “Aşçının Kitabı” (1914), was written in Turkish, but using Armenian characters", says Takuhi Tovmasyan in her office crammed with books. Takuhi is the author of a book in which family memories are interwoven with Armenian recipes in Istanbul and its surroundings. "Meat, eggplant, green peppers, onions, garlic, lentils, beans, tomatoes, spices. In the memories of my childhood all the ingredients and smells in my grandmother's kitchen speak both Armenian and Turkish. I still feel on my tongue the taste of food and all the words".

On the islands, the crossing of the lines that usually divide religions and ethnicities was and continues to be a constant. The sweet bread originally prepared by the Greeks to celebrate the Passover, for example, has over time become a staple food for all the population, and under the name of paskalya föreği is consumed throughout the year without reference to the religious celebration. The spring festival of St. George (Ayios Yorgi, with a church dedicated to him on Büyükada) corresponds to the Turkish Hıdrellez – both communities celebrate with a picnic where the main dish is roast lamb.

"My family was mixed with Greek and Turkish blood, but also Hebrew and Hungarian – a true Ottoman family", recalls with a smile Sema Temizkan, passionate researcher of the Greek-Byzantine cultural heritage. "The kitchen was the kingdom of my grandmother Theopoula, who was capable to meet and enhance all the colourful festivities that marked the life of our house, for example with fanuropita, a cake mixed with orange juice and grape juice, consumed on August 27th in honour of Ayos Fanurios, the patron saint of lost things".

It only takes a few hundred metres along the steep sides of Büyükada, where rows of cypress trees leave little by little room for dark forests of pine, to find yourself alone. Cars are banned on the islands, where bikes or horse-drawn carriages are the only transport. From here, Istanbul, with its miles of concrete buildings and skyscrapers, is a fascinating, but equally terrible vision. The immense megalopolis represents the danger facing the islands' microcosm. Hundreds of thousands of people every week leave the chaos of the city behind for a few hours on the quiet Princes' Islands – a peaceful invasion, but one that may succeed where the violent ones of the past have not, and delete words and fragrances of an unrepeatable history of coexistence and mutual enrichment.

A real danger, to fight with words and flavours. The stakes are too high in case of defeat – not even the intercession of Ayos Fanurios, I fear, could help Istanbul to find the lost treasure of pearls on the Sea of Marmara.