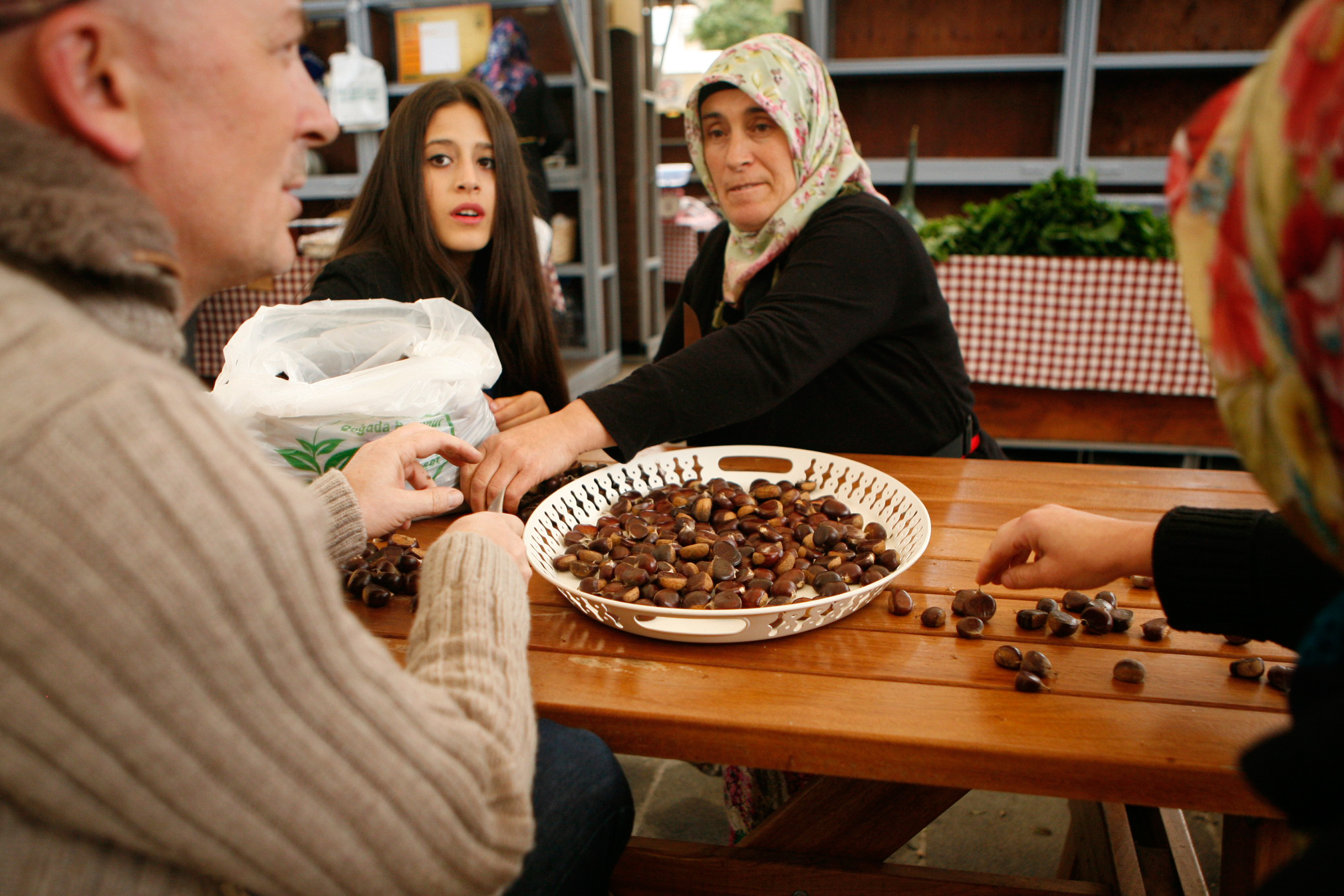 A place for meetings and exchanges, the market at Şile, in Turkey, faces up to both the opportunities and the challenges presented by its proximity to the megalopolis of Istanbul

“For us the market was, and remains, the place of the 'muhabbet'”. Tumay İmamoğlu, the mover of the Farmers' Market at Şile, a small port on the Black Sea coast of Turkey a few kilometres north of Istanbul, uses an old word which summarizes in just a few syllables the whole Turkish sense of conviviality. “Muhabbet” - the easy conversation that presupposes the pleasure of being together, but includes a sharing of feelings, ideas and naturally, being a market, produce.

“The idea of creating a farmers' market at Şile emerged in 2011. Then local farmers, coming mostly from the villages in that municipality, sold their produce in the streets, in very basic conditions”, Tumay tells us as we walk along the stone quay which protects the port from the incessant, unfeeling waves in the shadow of the castle built by the Genoese in the XIV century on a sharp spur of rock rising sheer above the sea. “Our objective was to create an organized space for selling, but also to add a sense of novelty, enabling the market to both renew itself and at the same time maintain its historic spirit. To seize the new opportunities and deal with new challenges”.

Opportunities and challenges in Şile have only one name: Istanbul. This town on the Bosphorous has in recent years become a tentacular megalopolis stretching for kilometres into the distance, sprawling out on two continents. And Şile, which now finds itself to be an outer suburb of a city numbering over 15 million inhabitants, cannot help but take Istanbul into account. The link has become even more evident with the recent construction of a highway, finished five years ago, making Şile now half an hour's drive away, Istanbul's infernal traffic permitting.

“In the summer Şile is invaded by tourists who come for a Sunday outing to the beaches. When I say 'invaded', I'm not using a euphemism – we're speaking of up to two million people in one day”, explains Fatma Denizci, organic farmer and pillar of the market. “More and more Istanbulites are buying land in the area to build villas and second homes for the holidays, thus taking the land away from agriculture. The danger is that the age-old bond between our people and their land will be broken”.

The strategy for avoiding this centres on the Farmers' Market. With a contribution from the local administration, an area in the town centre has been equipped to accommodate stalls and stands. And results have not been long in arriving: the better organization, together with the decision to hold the market both on Fridays (as it was in the past) and on Sundays (when so many tourists are present) has noticeably raised the farmers' incomes.

“The process has brought several benefits. Consumers are assured of produce grown and sold according to a strict protocol, observed by all the producers at the market. In other words, they know what they are eating”, says Fatma smiling. “On the other side, greater earnings for the farmers mean more land under cultivation and fewer fields invaded by cement. And, a very important factor, fewer young people tempted to leave for the big city, in a context of drastic depopulation of the villages”.

We go up the street that slopes steeply inland, leaving behind the dark, tempestuous outline of the Black Sea, roughened by the torrential rain and north wind of the early autumn. After a few kilometres, nothing of the sea remains but a salty smell in the thin air. The landscape becomes green: the meadows luminous, while the woods which line the ridges are dark and gloomy. We enter Yazımanayır, a few low square houses grouped around a minaret, surrounded by the lively untidiness of the country. Metin and Elif Özdemir live here. Today is Saturday and the ample brick oven has already been lit and prepared for the goods which tomorrow will make a good showing on the market counters.

Elif directs the operations with rapid and decisive gestures. First to enter the dark, burning mouth of the oven are the juicy filled rolls of börek, the symbolic dish of Turkish culinary tradition based on fine flakes of pastry, here called yufka. With her mother, Güler, Elif has made every variety this tasty dish is capable of: börek of potatoes, spinach, stuffed with lor (a local soft cheese) and one with onion, minced meat and bulgur (a whole grain, steamed and dried). The börek is followed by the solid, rounded loaves of bread with its intense, familiar smell.

“The Farmers' Market has been a great opportunity for us. Trading in an organized, recognized space is a guarantee both for the customers and for us”, Metin tells us, sipping his dark, syrupy tea – in Turkey an essential part of any social event. “We've improved our sales and, thanks to higher earnings, we've been able to create better facilities for preparing and packaging the products we offer”.

For the people of the 57 villages of the Şile municipality, the economic sustainability of small scale farming is a fundamental element. Until quite recently, a large part of the population made up their incomes with the tough job of charcoal burning. Today this activity is banned by the authorities because of its ecological impact on an ecosystem made fragile by the economic growth and urban expansion.

Time passes slowly near the warmth of the oven, between the fragrant börek pastry and the tea bubbling happily in the Özdemirs' silver samovar. But when the sky to east fills with dark streaks, it's time to go back to Şile.

On Sunday morning the market comes to life gently – the “high” season, the summer, is over and the town has taken on the slow rhythm of the colder months. But there are still quite a number of people present, both customers and stall-holders – the fifteen who got drawn into the first phase of the Şile market have now become more than fifty.

“Convincing producers and consumers was not easy, especially at the start. It's a continuous process requiring patience and the ability to listen”, Fatma tells us as we try some chestnut honey, perhaps the most famous product of the Turkish Black Sea coast. “In Turkey markets like ours are still a novelty and concepts like local, sustainable and organic are not yet widespread. The farmers' market therefore is not just for trading but also educational for those who sell and those who buy”.

All around us, on the counters set out in squares on four wide steps which follow the natural drop of the land towards the sea, the season's colours and flavours are displayed in all their simplicity and sponteneity: green pomgranates carefully stacked, lettuce exuding the freshness of the recent abundant rain, chunky chestnuts heaped in large wicker baskets, bright yellow, juicy pumpkins, bags filled with erişte, the traditional Turkish broken pasta, long lines of bottles of turşu, the colourful, tasty pickles ever-present on the winter table and jars of white, creamy yoghurt.

Tumay and Fatma's plans for the near future would also foresee a cafe where the local food can be sampled, where renowned chefs and everyday traders will take to the stoves, offering new recipes using the produce displayed on the stalls.

While waiting for this to become reality, the Şile market continues in its spontaneous, informal way.

There appears, almost by magic, a great pan brimful of mihlama, a sort of cornmeal polenta with melted cheese and butter. The whole market place suddenly comes to life – people eat, sip tea, chat and chat some more.

“I said so, didn't I?” Tumay laughs cheerfully as he dips his bread into the steaming yellow mihlama. “Where there's muhabbet, there's a market”.