Journalism in Turkey: my days in jail after the coup 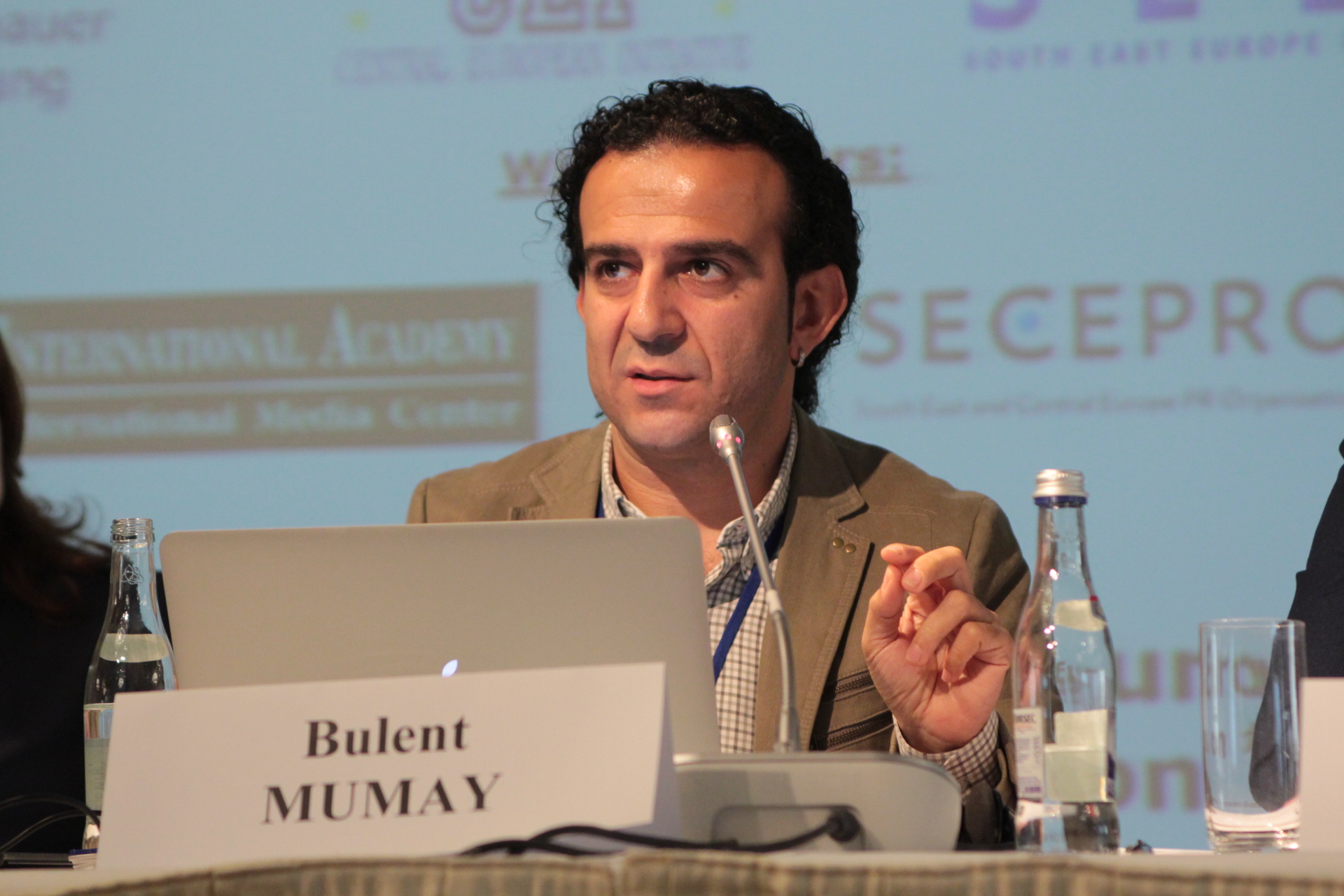 The attempted coup of July 15 and its harsh impact on Turkish media and journalists. An editorial by Bulent Mumay, of one of the journalists arrested in those days and later released

Such an endearing banter, although not too original, could belong in a fight between teenagers or delirious hooligans during a game. Neither is true, though – these are hateful messages posted on Facebook to a journalist (namely, me – hello everyone!) after his arrest. And I spare you the posts that expressed the desire to have intercourses with my mother or other fantasies about myself.

As a journalist, I am known for my critical approach throughout my 19 years of career. The messages above arrived after my arrest on charges of supporting the coup of last July 15th, one of Turkey's most terrifying nights. Ten days after the coup, the waves of arrests reached reporters. All those who worked in newspapers related to Fethullah Gülen, leader of the Hitzmet brotherhood – that turned out to be behind that bloody night – were gradually arrested. And the newspapers, TV stations, and Internet sites that supported Gülen – who resides in the United States – have been closed.

Gülen's supporters, until a few years ago in the good graces of the Justice and Development Party (AKP, at the helm of Turkey for 14 years) and welcome in the ranks of security forces and the judiciary, after the coup were declared terrorists – of course, together with the journalists who worked in those circles...

After the attempted coup, the tension that had started three years ago after the breakup of the informal coalition between Erdoğan and Gülen turned into a witchhunt. People ending up in daily updated blacklists have been filling the jails. Of course, as in any self-respecting witchhunt, blacklists include people who had nothing to do with either the coup or Gülen – critics of the ruling majority!

Under the pretext of the coup, the government started arresting those it had targeted before, but had not been able to punish. Thanks to the impunity guaranteed by the law on state of emergency, declared after the coup, critics of both the government and Gülen were added to the blacklist. They even arrested a Marxist historian on charges of supporting the Islamic brotherhood of Gülen's supporters. On the evening of July 26th, it was my turn. How did I get that? The first page of a pro-government newspaper featured my picture with the word WANTED imprinted over...

And so they came to knock at my door, that of a journalist who had protested against the pressures the AKP-Gülen coalition, then strong, exercised on the press – a noted opposer that had taken to the streets for arrested colleagues.

I was arrested at 10.30 pm on charges of "supporting and aiding Gülen's terrorist organisation and the coup". This was the most surreal moment in my life. A journalist working in Turkey cannot but end up making the acquaintance of police stations and prisons, but there are typical charges – for example, critics of the Kurdish question may be accused of "separatism"; critics of political leaders may be arrested for "offense against the state representatives".

Such allegations are a common occurrence for journalists in Turkey. On the other hand, as a journalist who has based most of his professional life on the opposition to coups and the brotherhood [Gülen's, ed.], I just could not believe I was being grouped with the journalists in favour of the coup. I was not the only one – local and foreign colleagues, familiar with my work, my political orientation, and my opposition to the brotherhood and the government, are in a state of total disorientation.

Three scary nights passed in a cramped cell of 5 square metres...when they sent me to court on the fourth day, I did not know what to expect. Before the hearing, I was questioned by the prosecutor. My dominant thought in the course of the three nights spent in the cell, before seeing the prosecutor, was: "How can I be associated to Gülen? Me, a supporter of the coup? What kind of links can they find? What evidence?".

When I entered the attorney's room, my questions were answered by a big surprise. The first page of the file in front of the prosecutor was my Linkedin profile – for a moment it looked like a job interview with a human resources manager. Almost as if he had not been the one that had me arrested and jailed for three nights! He leafed through some other page of the booklet with the "evidence". There was nothing except a couple of news pieces that I wrote a few years ago and some tweets that had nothing to do with the coup or Gülen. Obviously, they were trying to make me into a "terrorist" with the first results of a Google search.

So, that was my ordeal after the coup – three nights in prison, one day in the prosecution office, and then back to freedom. Clearly they wanted to teach me a lesson, scare me because I annoyed the government in the past. Not all of those arrested in my same list have been so lucky. Almost all those who worked in the newspapers of Gülen's supporters were arrested – those that Erdoğan, after the breakup of the coalition, labelled as terrorists saying that he had been "deceived". What happened to me is nothing compared to what happened to others, both in the entire history of the press in Turkey and in the aftermath of the coup.

In Turkey, freedom of the press has always been threatened. Journalists have been targeted by both coup leaders and governments. The aftermath of the bloody coup attempt of July 15th was not different. However, it is difficult to take stock of a situation that changes daily. Dozens of radio stations, TV stations, newspapers, and websites were closed. One hundred journalists were jailed.

The AKP was founded in 2001 by a group calling itself more liberal than the Islamist party from which it separated. A year later, thanks to the results achieved in the elections, it came to power. The AKP leadership, however, knowing that the government team was moving on a very fragile soil because of previous coups and crises, felt the need to take precautions to consolidate their power and formed an alliance with one of the most important brotherhoods in the country that, after the coup of September 12th, 1980, had been just tolerated, but sometimes also supported against the growth of the left.

The AKP, which defines itself a Muslim-Democratic Party, under Erdoğan's leadership made an agreement with Fethullah Gülen. Gülen's circles subtly infiltrated the ranks of the state, forming what is now called "a parallel state" that tries to prevent any attacks against it. From the police to finance, from the media to football, Gülen's followers begun to represent the AKP team within the bureaucracy. This secret coalition has inflicted severe blows to media freedom, e.g. by condemning various newspapers to pay fines for several billion Euros or by jailing hundreds of Kemalist generals to weaken the power of the army.

Yet, as in all partnerships, sooner or later a crisis was inevitable. The coalition has grown, becoming increasingly influential, and at some point the two partners wondered who was the most powerful. What was the spark, no one knows exactly. However, those who yesterday called each other brothers are now accusing each other of being terrorists.

Turkey is experiencing one of the most significant fractures in its recent history – fractures that sometimes can become grounds for hope. Are we capable to take a path that will lead us to a better democracy and, for us journalists, greater freedom of the press? Unfortunately, we do not have many reasons to be optimistic. In history, the struggle between two Islamist leaders has never stemmed a better democracy.

* Bülent Mumay is a 39 years old freelance journalist. Columnist of Turkish daily Birgün and German Frankfurter Allgemeine Zeitung, he is teaching digital journalism at Kadir Has University. In 2013, Mumay has been honoured with the prestigious Human Rights Award of the South East Europe Media Organization (SEEMO), an affiliate of the International Press Institute (IPI), for his “human rights-oriented editorial approach despite pressures during Gezi protests.