Turkey, journalism is not a crime 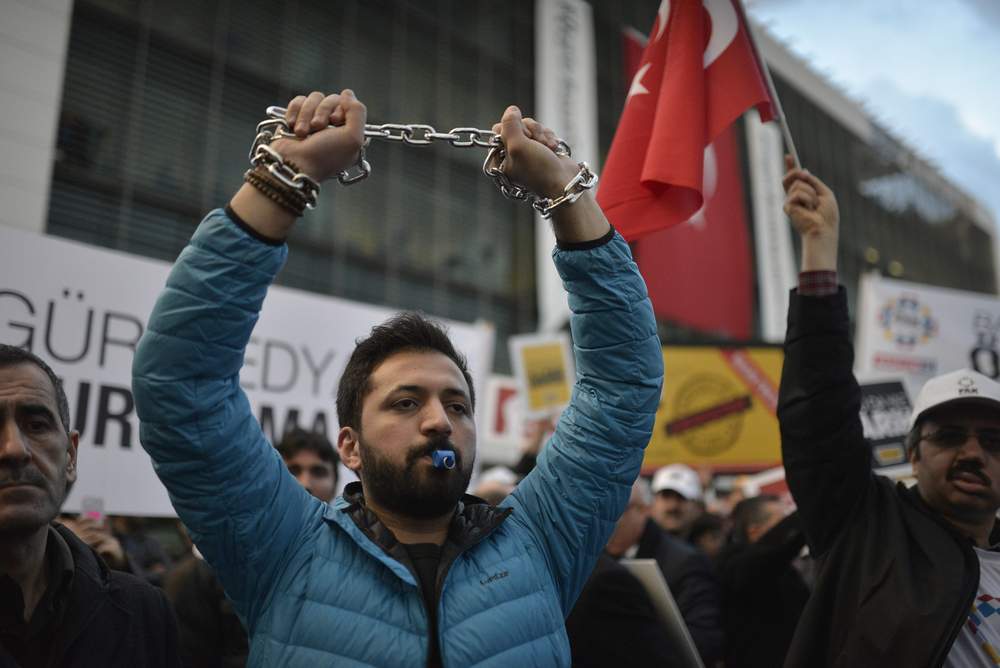 Turkey, protest for press freedom in the country - Orlok/Shutterstock

Articles used as evidence against the accused, long periods of detention, a definition of "terrorism" with vague boundaries. In Turkey, the press freedom situation continues to cause concern. The report by our correspondent

"Due to the confidentiality order, no one told me what I have been accused of in the police station. They just asked me a couple of questions about my social media posts, and that was all. I had no clue about the charges until I had a chance to see the indictment in which my journalistic activities were presented as evidence”.

Reporter Seda Taşkın was working for Mezopotamya News Agency, a pro-Kurdish media outlet. In December 2017, she was detained shortly after an anonymous informer called the police, claiming she had ties with a terrorist organisation. Last October, she was sentenced to seven years and six months in prison for affiliation with outlawed Kurdistan Workers’ Party (PKK) on charges of “aiding a terrorist organisation without being a member” and “conducting propaganda for a terrorist organisation”. After spending one year in jail, Taşkın was released on January 17th after a decision by the upper court. The bill of indictment cited interviews she conducted, news articles she wrote, and phone calls with news sources and lawyers as evidence of terror-related crimes, in addition to Facebook and Twitter sharings and her photos taken on World Press Freedom Day. “There was no tangible evidence. Not me, but the journalism profession was on trial. Journalism, though, is not a crime. That is what I kept on saying in court hearings”, she told OBC Transeuropa.

According to the “Justice Monitoring Report: Freedom of Expression Trials in Turkey June-December 2018”, which collects and analyses data from 90 court sessions in 82 hearings of 71 separate trials, 72% of the charges against journalists on trial are terror-related crimes. The report, drafted by the International Press Institute (IPI) and Media and Law Studies Association’s (MLSA) Legal Unit, also shows that in 77% of the trials observed the evidence presented against the defendants was work-related. Like in Seda Taşkın's case, in most of the free speech trials in Turkey, statements, articles, news reports, and social media posts are brought up against defendants as evidence and this work-related evidence is used to justify the continuation of the detention. The report, however, points out that, especially in freedom of speech cases, detention should carry a legitimate purpose in addition to being a necessary and proportionate measure.

The Resource Centre curated by OBCT includes several studies on Turkey. Among the most recent ones we wish to highlight our latest special dossier: "Media Freedom in Turkey" along with a work stemmed from an extensive monitoring process of freedom of expression related trials: The "Justice Monitoring Report" by the Media and Law Studies Association (MLSA) and International Press Institute (IPI) .

Lawyer Veysel Ok from the Media and Law Studies Association says that Turkish courts fails to respect even the minimum standards or decisions set by the European Court of Human Rights and European Human Rights Conventions. “Far from fulfilling international standards, Turkey is doing the opposite. The right to a fair trial is repeatedly violated and defendants are jailed on unlawful basis”, the lawyer says to OBCT.

Veysel Ok stresses another unsolved problem in freedom of expression cases: long periods of pre-trial detention. He points out that detention has become a regular judicial practice rather than an exceptional one. "Even though Turkey’s Constitutional Court decision for jailed journalists Mehmet Altan and Şahin Alpay stated that articles and statements cannot be the only evidence for detention, local courts do not implement this decision", Ok says. Last year in January, the Constitutional Court ruled that the journalists’ rights had been violated as a result of pre-trial detention, which led to violations of the “right to personal liberty and security” and “freedom of expression and the press”.

In addition to the long detention periods, most defendants in free speech trials give their testimonies via a video conferencing system called “SEGBIS”, which is another violation of their right to a fair trial. Veysel Ok explains: “Can you imagine that you are detained on the basis of your writings or speeches and you are not even given the chance to defend yourself in the courtroom?”.

“Arrests intimidating society as a whole”

Turkey was ranked 157th out of 180 countries in the 2018 World Press Freedom Index of Reporters Without Borders (RSF). RSF describes the trend as a “historic decline” for press freedom in Turkey. Erol Önderoğlu, Turkey Representative of Reporters Without Borders (RSF), says that charges like "Insulting the President", "Spreading Terror Propaganda", and "Aiding a Terror Organisation" are creating excuses for jailing journalists.

“When the government had an intention to weaken Turkey's main opposition party, the Republican People's Party (CHP), we saw that they went after the Cumhuriyet newspaper which is affiliated with CHP. Similarly, as soon as the Kurdish Peace Process was over, pro-Kurdish newspaper Özgür Gündem was targeted”, Önderoğlu says to OBCT.

Önderoğlu believes that arresting journalists also intimidates society as a whole and therefore delivers a clear and important message to the public. “RSF will continue to show solidarity with press freedom cases in Turkey”, he adds.

“The definition of terrorism has lost its meaning”

According to Amnesty International's senior Turkey researcher Andrew Gardner, today in Turkey citizens’ rights to freedom of expression and critique are facing great challenges. Gardner thinks there is no guarantee for those who openly criticise the government. “There is a climate of fear and trials of people for expressing their nonviolent opinions have reached an epidemic level in the country”, he states.

According to Gardner, the concept of terrorism in Turkey has been always incredibly vague and subject to abuses by the government for political reasons. He adds, “but never to the current extent, with the definition of terrorism having lost all its meaning”. Since there is no independent judiciary in Turkey, Amnesty’s Turkey researcher states, the misuse of anti-terrorism legislation has been used as a trick to prosecute all types of dissent across the country, with authors, journalists, activists, human rights defenders, and ordinary citizens who express their opinions on social media being routinely punished.

Gardner strongly believes that violation of free speech rights currently is Turkey’s deepest-rooted human rights problem. Governments using their power to suppress the opinions of others is not new to Turkey. “Dissent is not tolerated and criticism is treated as an insult”, he says.

The Resource Centre  curated by OBCT includes several studies on Turkey. Among the most recent ones we wish to highlight our latest special dossier: "Media Freedom in Turkey" along with a work stemmed from an extensive monitoring process of freedom of expression related trials: The "Justice Monitoring Report" by the Media and Law Studies Association (MLSA) and International Press Institute (IPI) .