A modern Odyssey: On the trail of Mussa Khan 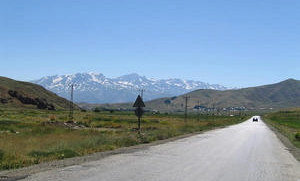 Van, near the border with Iran - johncumbers/flickr

Months, years, constantly moving. Rejected, invisible, on the margins. This is the destiny of the Afghan muhajirins, on a tenacious search for the dream called “Europe”. Starting from today, with the episodes of the “Mussa Khan” blog, we are going to tell their odyssey through Turkey, Greece and Italy, until the Ostiense Station in Rome

“This is Kurdistan, not Turkey!”  His eyes stormy, Taha is very convincing.  After three weeks of border crossings and a thousand different languages, I stumble on the easiest of words: “Thank you.”  “No problem!” he reassures me with a smile. Then he takes me by the arm and walks me to the city center through a labyrinth of alleys crowded with the tables and stools of tea shops.

Shahin, who for three to four days will be my interpreter, is waiting for us.  A recent graduate, wearing a striped shirt and black leather shoes, he doesn’t inspire much confidence with his tremulous voice.  His employ  is the result of tenacious research on the part of Taha, whom I had met just one hour earlier on the bus. After introductions, a cup of tea, and a shoeshine, we got to work. Mussa Khan will soon be in the area and, before he arrives, I want to have a full understanding of the situation Afghan refugees face when they arrive in Van, Turkey, the arrival point for those coming by way of Iran.

Shahin proves himself a good guide as well as a competent interpreter. He negotiates his way through the back alleys saturated with colors, he dodges vendors as they are closing in and pounces on the first task of the day: IHD, Human Rights Association, located in an anonymous building on Cumhuriyet Caddesi, “Republic Street.” Inside, I meet Maria, a lawyer from Helsinki Citizenship Assembly, the only organization in Van dedicated to providing legal consultancy for asylum seekers.

The interview lasts only half an hour, in a short break between Maria’s meetings. The organization's clients are predominantly Afghans.“In the last two years their numbers have increased exponentially; since the end of March to today, we have had 91 cases involving Afghans,” she tells me.  “In certain periods we have had two or three Afghans knocking at our door each day.” Maria said this increase “is not so much due to an overall increase of migrants, but to the more restrictive measures adopted toward asylum seekers by Europe.”

The consequence, she says, is an enormous backlog stretching all the way to Van.

Notwithstanding the rush, I’m satisfied. I have found out that there are between 1,200 and 1,500 Afghans in the city, concentrated in a couple of suburbs. Mussa Khan must be aware of the situation, having heard through the grapevine or been informed by the guides escorting him and his group through the mountains between Iran and Turkey.

I haven’t heard any news from Mussa Khan for three days, when he last sent a Facebook message from Tabriz to his cousin Asif, who lives in Italy as a refugee: “We will leave tomorrow morning. Hoda Hafez Asif”.

It will be no easy feat finding him. From Iran, he won’t be able to communicate, as text messages from within Iran addressed to somewhere abroad are blocked in most cases. I have to hope he will show up immediately once he reaches Turkey, via Facebook or via text message from a Turkish SIM card. The chances that he will stop in Van are high since he is moving like most self-sustained migrants: step by step, city by city, without a fixed plan, until arrival on European shores.

The midday sun doesn’t deter us: we are at 2,000 meters above sea level on the banks of the biggest lake in Turkey and the weather is mild here. I ask Shahin if he can follow me to the UNHCR , the United Nations Agency for Refugees, located out of town. I want to ask if immigrants seek out UN protection after the challenging hike over the Turkish-Iranian border. From the street, the Office looks like a fortress: barbed wires, high walls, armored gates, private security. An Afghan woman is knocking at a door that nobody is going to open. I will try again next week.

We go back to the city center for a bite of burek, crispy pastry enveloping cheese, and a sip of ayran, a Turkish sour milk drink almost as popular as tea. I ask Shahin how much he knows about Agfhan migrants coming to Van, but he only shakes his head. I like this boy’s sincere nature. Pointing at the military base dominating the city, upon which is written ”I am proud to be Turkish”, he tells me that ten years ago, there were tanks patrolling these streets and the talk was mainly about bombings, resistance, repression. Before proposing our next destination to me, he concludes: living with war in the home is inhuman.

Then my thoughts turn to Mussa Khan. Where are you, rebel Afghan? Didn’t your cousin tell you not to leave for Europe on the eve of 18?  That the hopes of making it are too small and the price to pay is too high? That a boy like you, who speaks English and knows his trade, could make it in Iran or Pakistan as well?

Tomorrow I will come to look for you in Yuksekova, in the mountains. If you have crossed the border at Urumiya, you should be right there.