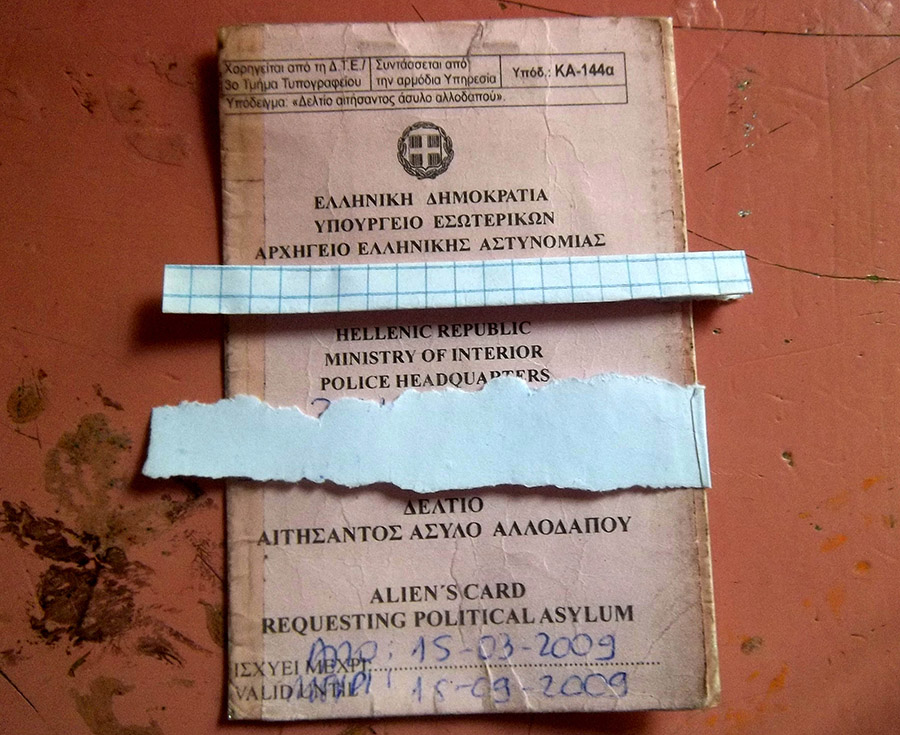 Victims of conflicts that do not concern them, like the hoary one between Greece and Turkey, which has left a mortal trail of mines along the border of the Evros. Even when they get to the long desired Hellenic land, however, the muhajirins find a country in the midst of an economic crisis, less and less willing to offer them protection and grant them asylum

Darkness pours out onto the hills of Thrace like a flood. The halogenous cone of the lights on the tarmac is the only help for the sight, void of any reference in the surrounding darkness.

Orestis has been driving for two hours, slowly so not to jeopardize the cargo. A long line of trucks halting before the junction for Traianopolis catches his attention: “Look there. There has been a compulsory strike for a week. Nothing can circulate, only food”. And he continues: “The economic crisis is eating us alive. I can still find work only because I transport beer, and the Greeks will never stop drinking beer”. I discover that the whole country has run out of fuel and that for days the trucks have crowded in front of the few gasoline stations that still have supplies.

Komotini. Orestis turns the engine off and lights a cigarette. “So, you want to know about the landmines”. He takes out a map from the side of the door and unfolds it on the dashboard. “From here to here” he says pointing to Nea Vissa and Kastanias, “it was all mine fields”. The strip of land stretches for about 10 kilometers. “It is the only part of land where the Evros disappears in Turkey, so Greece does not control the right bank of the river. There, Greek soldiers and Turkish soldiers face each other, and there is no water between them”.

To make up for this hostile geography, Greece has set up a series of tactical barriers. “Nothing is casual, there. A tank for fish breeding is actually a flooded trench. A woodland hides a passage that cannot be detected by the satellites, and so on”. He folds the map and throws the cigarette butt away. “The mines are the worst evil. And unfortunately, those who pay the consequences are those who have nothing to do with it, the migrants”.

2008. Greece carries out the reclamation of the mine fields, pressed by the international community. Orestis works in that region. “The technicians removed the mines. But even then, we would often hear deaf, sudden explosions. It happened often, in those six months. One evening, a friend of mine was on patrol. The pictures he took with his cellular phone kept me awake for days. The bodies had lost their shapes, they were just trunks with no arms and no legs”.

“What about now?”, I ask him while he enters the highway again, “Has the area been reclaimed?”. He lights another cigarette. Shiny ashes fly in the dark. “Officially yes. But there is a problem: floods. When the river overflows, the water fluidifies the land and the mines move. So, even when you read the maps of the mine fields, it is impossible to trace all mines”. And he adds: “Even in the reclaimed areas it was absolutely forbidden to leave the beaten paths and tracks. The Greek army could not even trust itself!”

A moment of silence gives me the opportunity to think. In Van, at the feet of the mountains coming down from Iran, a pilot from the Turkish army confessed to me that, in those territories, the army has license to kill. Those who pay the consequences are, indeed, the migrants, victims of a war that is not their own. Now, 2.000 kilometers away, I find a similar scenario. The road to Europe drips with migrant blood. I hope Mussa Khan was able to get away this time, too.

My flow of thoughts is interrupted by Orestis. “One day I heard a rumor that the Turkish soldiers, together with the traffickers, use migrants as guinea-pigs. They give them the wrong instructions on crossing the fields, so they end up among the mines. That way, they test the status of the advancement of the reclamation”.

The muffled dawn forebodes a torrid day. The Via Egnatia, the ancient street axis linking the Adriatic to the Dardanelles, runs at my feet. While waiting for a ride to Thessaloniki, I think about the words that Orestis told me before saying goodbye, driving on to Larissa. “I would often see the trucks full of migrants, in the middle of the night. They would take them out of the cells of the base and put them on the trucks. I did not know where they were taking them, they did not let conscript soldiers like me perform that kind of service. When they returned in the morning, though, the trucks were empty”. Observing illegal refoulements first-hand.

Yusuf is Somali. I meet him in Thessaloniki in the hall of the xenonas, a 3-story building used as a shelter for migrants. “I spent a whole lot of money to cross the Evros with my eight children and my wife, to then remain stuck here. I have been waiting for the interview with the UNHCR for over a year and a half”. Together with Yusuf, 60 people live in the xenonas. Over half of the guests are Afghan muhajirins. “We go on with the pink card, the residence permit for asylum seekers. But it is just like waste paper. No one can find a job, with it”.

“The problem is that the Greek government does not have the resources to bridge the phenomenon”. Meropi has been a volunteer at the shelter, for a while. “For about a year, we at the Antiracist Movement have taken the situation in our hands. The government used to manage this shelter and other shelters directly, but then it gave everything to associations and bodies that were not very transparent and went bankrupt a few months later. Since then, everything has been managed by us volunteers”.

Meropi takes me on a tour of the building. Entire families live crammed in single rooms. “At least they have found a place to stay. Most of the migrants only have the streets”. Forty-five thousand asylum seekers are estimated to be in Greece, while there are practically no shelters.
We hear a car horn down the street. We look out the balcony. A Greek boy is unloading tomato cases, detergents, packs of pasta, powdered milk from the trunk. “People give us a lot of support, otherwise we would not be able to make it. But I do not know how long it will last. The social situation in Greece is a time bomb and, unfortunately, the economic crisis is speeding times up even more”.

Iran. Afghanistan. Somalia. Palestine. Eritrea. The list of the nationalities hosted in the xenonas sounds like a war bulletin. In the afternoon Alì, an energetic Palestinian family head, lets me sleep for a few hours at his place. In the room, his three children are playing noisily with Somali, Afghan and Eritrean children, jumping from one bed to another. They are speaking a mixture of Arabic, Greek and English. If it were not for the dramatic nature of the situation and for the serious fate looming over these children, I would say that the best generation of tomorrow is right in front of my eyes.

The night goes by sleepless, as often happens to the muhajirins. “We never sleep because our thoughts are busy trying to find a way out, to continue our journey. As long as we move, our bodies tire and so do our minds. But we are forced not to move, here, and our thoughts are restless”. Alì, Yusuf and Osama, an Afghan family head, the oldest living in the shelter, tell snatches from their stories. Stories of endless escapes interrupted, if only for a while, thanks to the work of the volunteers of Thessaloniki. “This is certainly not our destination. But there are few ways, now, to get to Europe, and all of them require a lot of money”.

Alì has already tried to cross the Adriatic five times. He is trying to reach Stockholm, where his wife and three children have been living for a year. “I have fake identity documents for me and my children, but we have always been caught because of the traffickers”. He takes out his son Hassan’s Spanish identity card, acquired in Omonia, in the center of Athens. “Once in Patras or Igoumenitsa the traffickers, experts in fake documents and identities, signal the presence of the migrants to the police. That way, they keep total control over the traffic of people”. Meanwhile, he shows me a picture from his cellular phone: it is a dark cell where his and Hassan’s face are recognizable. “It is from a month ago, after our latest failed attempt. They arrest children too, as you can see”.

Yusuf has never attempted, fearing the idea of traveling with eight children. “The difficulties I encountered traveling from Somalia to here are nothing, compared to what awaits me on the Adriatic”.

Osama tells an unbelievable story: “I paid 2.000 Dollars to get on a truck bound to Bari. I was with 20 Afghan muhajirins. We sailed for a whole day, leaving from Patras. It all seemed regular. Once we arrived, the truck driver let us off in an isolated place and left. Only in the morning did we learn that we were on the island of Crete instead of Italy”.

At 5 in the morning we finally get to sleep. In the silence of our room, I ask Alì if he has ever heard of illegal refoulements on the Evros river. A long sigh precedes his answer: “On the 25th of November 2006, the Greek army put me and my family on a boat, together with 120 people. But they did not send us back to Turkey, they left us on a small isle in the river, in the middle of the night. My youngest children, two twins, were two months-old. It was the hardest day of my life”. His harsh story fills the brief moments just before dawn.

When the first light of day comes in through the window, Alì gets up from his bed. “I am not sleepy, do you want some coffee?”. I smile. For him, it is just the beginning of another endless day of waiting. For me, another day in search of Mussa Khan.