Mussa Khan. The boys of the fence 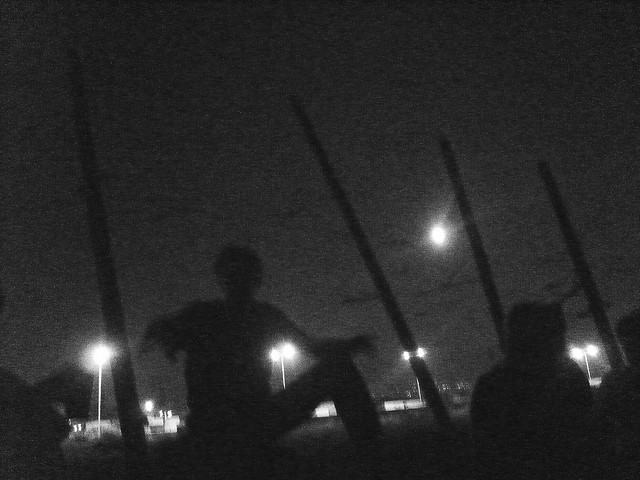 Patras. Along with migrants from all over the world, the muhajirins are also waiting for the right moment to jump the fence bordering the port, in a surreal and dangerous hide and seek with the police. The stake, though, is high: a ship towards Italy and the dream called “Europe”

Laying on his side, Abdallah watches the sun as it sinks in the Adriatic. A light breeze brushes the abandoned terrace where old mattresses are lined. This is the dorm of the Algerian migrants. “That down there”, says Abdallah looking at the fiery horizon, “is not the sea”. He takes a wisp of straw off the floor and passes it through his extremely white teeth. “That is a curtain of a huge stage. If you open it, you can see the most beautiful show in the world: Europe….”

Patras. The echo of the croaking sirens scans the arrivals and departures of the ferries bound for Italy. Huge steel beasts make slow and extremely precise maneuvers among the wharves, on a sheet of water stretching half a kilometer. High fences decorated with rolls of barbed wire sanction the inaccessible borders of the port. From the terrace, the Algerian harragas are able to watch all this at a glance.

“Look down there”, says Abdallah pointing North, near the building where the ticket office is. “That is the Afghan spot. Afghans jump there”. Then he points at the area at our feet: “Down here is where we jump. Algerians, Moroccans, Tunisians, Palestinians”. Then he turns his gaze towards South. “I have never seen that area up close. Africans are there. And further down, the Kurds”. Beyond the fence, port police units on motorcycles nervously patrol the area.

Thursday. The main trade terminal in Western Greece, for years Patras has been the departure point for migrants bound for Europe. After only a half hour in the city, walking on the promenade, I come across a bunch of Arab boys sitting on the curb. The port is on the other side of the street, beyond the fence. “Salam u aleikum.” A surprised look on their faces for the unexpected greeting.  Abdallah is the only one to answer. I sit next to him. He graduated in biology in Germany and has lived in Europe for six years. He speaks German, English, French and Arabic. After his graduation, he was not able to renew his Schengen visa, necessary to reside in Europe. Now, like all the other boys sitting around me, he is trying to jump the fence to get on a ferry to Italy.

“Once you jump the fence, you have to slip in one the trucks waiting there, or in one of those already in line. But it is not easy, just one or two people a day manage to pass”. While I am listening to him, three boys stand up and cross the street. They throw a blanket on the barbed wire of the fence and start climbing, helping each other. A tree beyond the fence is precious to grip on to, to avoid jumping on the barbed wire rolled up at the basis of the fence. “There are three places you can hide, on the truck: the vent on the hood, the tank under the trailer and the axes of the rear wheels”. The port police keep relentlessly patrolling on their motorcycles, among the lorries.

While going up on the terrace, Abdallah confesses that it is a bad day for him and he has no intentions of trying his luck. “This morning my friend Osman called me from Venice. He was able to leave two days ago, simply by pretending he was a tourist. I am happy for him, but now I feel very lonely. We had been together for four months, night and day. He will be in Frankfurt in a few days, where my girlfriend lives. He will tell her that I, too, am going to be there soon”.

Night falls. On their own or in small groups, all the harragas go back to their camp. None of them was able to make it. “no ferry departs until midnight. It is useless to remain in the street”. In a circle, they repeat by heart the times of all the ferry lines that stop in the port. One of them has been here for ten months.

Sitting in a corner, two boys are chopping onions, tomatoes and peppers in a plastic can cut in half. They are going to share their meal with the others. “Do you want to eat with us?”. I light up a cigarette. “Thank you, I am not hungry”. Just a little earlier I had seen the same people looking for food in trash cans.

At 10 we are again close to the fences. In the instants right before the jump, excitement is at its highest, tension vibrates in the air. I look appalled at what stills seems to be like a game, to me. With the same agility with which they access the port, the boys rush out of it, followed by the police. Once they are safe, the migrants release adrenaline by cursing the agents behind the fence. The police do the same, pointing the migrants’ faces one by one” “I know you, I’m going to get you sooner or later!”. Every once in a while, a patrol on the external side of the fence disperses the group, but it is enough to remain hidden in the alleys for a few minutes to escape danger.

“The migrants jumping the fence are just a small minority of those going through Patras. Indeed, most of them get on the trucks in Athens, organized by the traffickers. Those trucks are hardly ever checked by the police”. Friday morning. Doctor Christos Karapiperis sees me in the Red Cross premises. He tells me about what he has been dealing with for years, now. “Last year, high officials of the Greek police were arrested with the charges of playing an important role in the trafficking of migrants”. He adds “And besides, the money involved is huge. Now a ride to Bari costs up to 7.000 Euros”. What makes the prices of corruption swell is mainly the improved techniques that the police use to locate human beings on board the trucks: they no longer use dog units but have more sophisticated carbon dioxide and heat sensors.

“This is the only medical center in the whole of Patras where migrants can refer to. We do not ask anybody for identity documents. The government has completely cancelled our funds since last May, though”. In the small emergency room on the first floor, the Red Cross operators continuously deal with traumas due to beating or falls. “The port police is of unprecedented violence. At the port, there is a container used as a security cell, where they put all the migrants captured after jumping the fence. When they come out of there, they are in really bad conditions”.

Noon. After the Superfast Ferry coming from Bari docks at the port, a flock of tourists floods on the main pier waiting for the bus. The line of cars coming out of the belly of the ship slowly disperses in the city. The bars and restaurants next to the port serve menus for 25 Euros each.

Just a few meters away, hiding in the bushes trimming the small train station, a group of migrants kneels on wretched scraps of cardboard. This Friday, as so many other Fridays, does not offer a more dignified place to pray.

In the evening I walk towards the area of the Afghan muhajirins, an old railway deposit next to a fence stretching about 100 meters. The separation of which area of the fence belongs to which ethnical group is net, scrupulous, fatal. Many beatings and stabbings started right because this rule was broken.

The sun sets slowly, flooding the pier and the Afghan boys’ faces with red. There are about 60 people, all of them younger than 20 years of age. Some of them are children still. Abu Mullah, a resourceful teenager, is the only one to have seen Italy. “Italy good, police no beat. Greek police bad!”. While talking, his gestures are unequivocal: punches, kicks, slaps, shoves.

After seven months in Italy, Abu Mullah was arrested and given an expulsion order. He escaped to France, where he was again arrested. The gendarmerie compared his fingerprints with the ones in the Eurodac system, a database where the fingerprints of migrants in the whole of Europe are saved. At that point, he was immediately transferred to Greece: Europe, in fact, obliges asylum seekers to reside in the first member country they are located, waiting for their status to be defined. This system was established by the sadly known Dublin Agreements and condemns thousands of Afghans to be stuck in Greece indefinitely.

“I do not give a damn about Dublin. When I get to Italy, I am going to marry an Italian girl, so no one can kick me out. Right?”. An innocent laugh accompanies Abu Mullah’s question. Illusion, dream and desire mix in these boys’ imagination. They almost look like boys on a school trip: they laugh, they kid, they pat each other’s shoulders.

When a truck passes nearby, though, they immediately change behavior. Like felines on the hunt, they lower their voices, they flatten against the pavement. Five or six of them, according to dynamics I cannot grasp, start after the truck, disappearing in the distance and in the dust cloud. I leave the boys to their dreams and randomly wander on the promenade.

Nightfall marks the beginning of a new carousel. Migrants and police, fences and sirens, escapes and chases. I run to the Afghan area, where a small crowd glued to the fence means nothing good. Two agents have just captured a muhajir and are violently frisking him. On the other side of the fence, right in front of our eyes, the boys is thrown on the floor and walked heavily on, his bag is knocked over the pavement. My screams mix with the muhajirins. The policemen answer with a challenging laugh.

I can feel something vibrate in my pocket, I look at my cell’s monitor. I am appalled. “Mussa Khan? Is that you?”. In the confusion of that moment, it seems like the answer is never going to arrive: “Hello kardash! I am in Igoumenitsa!”

On this side of the fence, the boys are just distant spots. Not even the time to say goodbye to all of them. My ferry leaves on time, at midnight. In eight hours, I will hug Mussa Khan.