Mussa Khan. The Jirga of Gaziantep 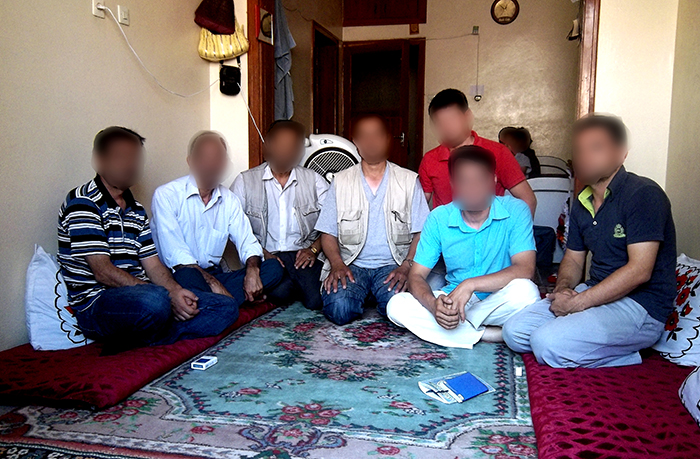 The Jirga of Gaziantep - P.Martino

The distance, journey and precariousness are not enough to deprive the Afghan refugees of their roots. The “Jirga” meets also in Gaziantep. The assembly of elders sits to face the painful topic of exile, but also day-to-day problems of those who hover between a bitter present and an uncertain future

The elder Abdal Halek is leafing through a booklet gone yellow. Sitting in a semicircle on the carpet, the assembly of the family heads observes silently. “My whole life since I have been in Turkey”. Forms, requests, certificates, clippings, notes. The gnarled fingers dip through the papers, stopping on a UNHCR headed paper: “It is from last week”. He hands it to me. “I have been invited to appeal for the third time. It means I have not been awarded refugee status, yet. After seven years”.

The old man continues, “But I no longer have the strength to wait. For years, I have waited and hoped. Then I tried. I sent my children to Greece with the traffickers twice. They were arrested, beaten and sent back here. I tried to go back to Teheran, but Iran is no longer the country we lived in for so long. I tried with the UNHCR, but they do not answer the phone in Ankara, anymore. And it has been months”. Then he turns his gaze to the ground. “From now on, I will simply do nothing”.

Gaziantep, Southern Anatolia. An inevitable stop in my journey towards Izmir, in my desperate attempt to have my destiny cross paths with Mussa Khan’s. A convergence of ancient transit roads, where Arabic, Turkish, Kurd and Persian cultures meet, the ancient Antep is one of the 26 “satellite cities” pointed out by the Turkish Government as a shelter for asylum seekers. Fifteen to 20 Afghan families live here, all waiting for a resettlement that never comes.

“They are extremely depressed. Some of them are serious”. Hakan, a psychologist at the  ASAM (Association for Solidarity with Asylum-Seekers and Migrants) knows the situation of the muhajirins very well. His association, spread throughout the country, has been assisting them for years. I meet with him Saturday morning, after the endless night travelling from Van. He has come to the office on purpose to meet me, curious about the request of an Italian reporter to meet the muhajirins.

“Europe, the United States and Australia have shut their doors on the Afghan refugees”, Hakan tells me. “Iraqi asylum seekers keep coming to Gazantiep, and within a year they are resettled in the West. Afghans know that there are places, but they see that they are always given to someone else. That is where their psychological pain stems from, they feel abandoned”.

Walking towards the Iran Bazaar, the neighborhood where most muhajirin families live, Hakan provides me with his interpretation of the facts. “Afghans are difficult to figure out. They often arrive following secondary movements, after years living in Iran or Pakistan. It is difficult to establish their identity, their past, any involvement on their part in terrorist activities: the UNHCR knows that the possibility for an Afghan to obtain resettlement is remote”. And he concludes: “That is why they do not even waste time with them anymore. They are waiting for better times. Inshalla”.

The Iran Bazaar is the center of gravity in the Afghan community. In this narrow stretch of road, between rows of stores, the busses with Iranian pilgrims park. They are headed to the Shiite holy places of Damascus: the Mosque of Sayyidah Zaynab, daughter of the first Shiite Imam, Alì, and that of Sayyidah Ruqayya, rebuilt in 1985 with Iranian funds. Here, looking over an improvised stall on the sidewalk, we find Bismilleh, young family head from Mazar-i Sharif. Within a few minutes, about ten muhajirins gather round me, disoriented by a European interested in their life stories.

They ask questions, exchange opinions. They observe. Hakan’s introduction is not enough to satisfy their impetuous curiosity. Finally, the arrival of the elder Abdal Halek settles everything. He invites me to his home, helped by his older son, Muslim, who translates for him. A train of family heads immediately follows.

I slowly realize what is happening. A thousand miles from Afghanistan, I am about to witness one of the most intimate rituals of the ancient Afghan tribal culture: it is the Jirga, the assembly of the elders.

It is a shorter, mixed, improvised and “exile” version, but it still holds the substance and solemnity it deserves. Nine men sit in a circle, their legs crossed. After the introductions and the tea, Abdal Halek has his son give him the yellow booklet. He pulls out the document from the UNHCR, the sentence condemning him to life imprisonment in the outdoors jail of temporary asylum.

It is the beginning of a long and bitter day, where Naqeeb’s words drill in my thoughts: “You will not like what you will see and hear”.

“Omar”, Abdal Halek says pointing at one of the attendees at his right hand, “arrived with his whole family two years ago”. A professional soldier, in 2003 he enlisted in the Afghan police, until the Taliban forced him to escape. “His wife and two younger children, though, disappeared over a month and a half ago. The police say they cannot do anything. The UNHCR does not intervene”. Omar is staring at the carpet, expressionless. The two who were left with him, of five and seven, are the only children admitted to the meeting. They have no other place to go.

“The truth is”, the old man continues, “that the ‘vulnerable refugees’ such as a woman alone with her children, are the only ones who can obtain asylum in Europe. So some trafficker must have convinced her to leave illegally, leaving the rest of the family behind. It would not be the first time”. The restrictive welcoming laws adopted in Europe show down here all their inhumane irrationality.

The participation to the conversation increases. Bismilleh, beside me, lets his bitterness out by speaking of resettlement: “Our appeals are rejected continuously, we do not even do them anymore. Even when we are recognized as refugees, no country welcomes us”. He continues: “The UNHCR has no trust in us: at the Ankara office there are only two Iranian interpreters. They only understand Dari, similar to Farsi. Many of us, though, speak Tajik, Pashtu or Uzbek. The outcome is always the same: our testimonies are considered unreliable”.

“Some countries like Norway”, Basmilleh continues, “grant asylum to the Afghans who can make it there illegally. It is for this reason that we are always thinking about escaping. When I have enough money, I myself will try. To get to Athens, traffickers ask for 4.000 Dollars a person, from there on I will manage somehow”.

Last year, in an attempt to send his children to Europe, Abdal Halek spent 9.000 Dollars. He had already paid 25.000 to come here with his family. “Only few make it. My children were arrested on a boat with 117 people. Algerians, Palestinians, Kurds, Iraqis, Pakistanis, Iranians, Somalis. But at least, they have come back, after a month in prison. Instead, some disappear forever”.

The entire morning goes by the painful rhythm of their stories. It almost seems like the frustration amassed during years of useless waiting has found, in my presence, a channel for expression, an activator.

After lunch, the Jirga explodes in a heated discussion. Morteza, family head of Uzbek ethnicity, takes a piece of paper out of his pocket and speaks to me: “We want you to know what happens here”.

The note contains the names of nine Turkish salesmen of the Iran Bazaar. For long, they have been trying to force the Afghans to shut their stalls, accusing them of unfair competition on prices. Three days ago, they threatened to kill Asif, one of the fiercest opposers of the ban among muhajirins. To make the threat more credible, they attached the list of their names. An act in true Mafia style.

“The reality”, Morteza explains, “is that Iranian pilgrims prefer buying from us because we speak Farsi, and because some of us are Shiites, like them”. He continues: “Salesmen no longer tolerate us. They told us: give us Asif and everything will be fine. If you do not, then we will consider you all guilty”. Then Morteza concludes, disarmed: “They have given us very little time. We have to find a solution immediately”.

I take advantage of the moment to take leave. The evening has come. A feeling of total impotence accompanies me through my journey towards Izmir. Tormenting questions resound in my brains. Do I have the right to slip in the lives of these people? How much hope does my interest arouse?

The muhajirins insisted I keep a copy of their requests for asylum with me. “Bring them to Ankara. They will listen to you”.

It was useless to tell them that my way would take a different path. The important thing, for them, is to start moving, break the waiting, find a reason to go on.