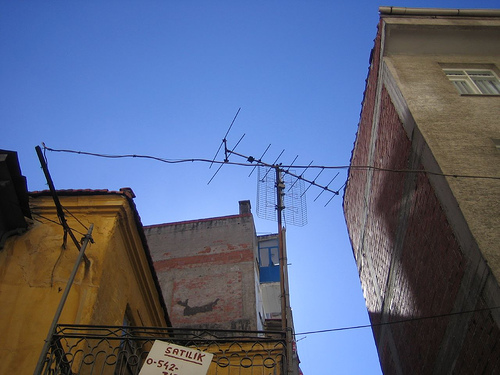 The Silk Road of the Third Millennium carries human flesh. Its terminal on Turkish soil is Izmir: here, muhajirins arrive. Muhajirins, like Mussa Khan, who try the Aegean route to end up, too often, at the bottom of the sea. To look for him, I need to enter Basmane, Europe’s door of the last

The shapeless silhouette silently creeps in the blind spot of my visual field, mistress of darkness. All around is Basmane, neighborhood of the damned, Europe’s door of the last.

After perceiving his presence, and before I can even turn around, the man manifests himself with a blatant, almost grotesque, greeting. The hand is already stretched out: “My friend! Were you looking for me?”

Izmir, ancient Smirne, for 2.500 years terminus of the dusty road network better known as the Silk Road. The most thriving bargaining place in the Mediterranean, from here the merchandise from China, India or Arabia finally took to the sea, bound for European ports.

History knows no irony. In the past few years, it has been right here in Basmane, in its historic center, that the migrants, the most precious merchandise of the third millennium, have interrupted their journey by land to face the waves of the Aegean.

Low on the horizon, the Greek islands are visible to the naked eye. After months or years of traveling, the undreamt-of European bank is the persuasive singing of deadly sirens: in this stretch of sea, the waters have swallowed thousands of muhajirins. Or harragas, as some call them here, the “men who burn the frontiers”.

From Basmane, traffic networks are woven that stretch up to the Horn of Africa, Pakistan, Senegal. The Silk Road of the Third Millennium carries human flesh.

It is Monday. In the morning, finally in the city after yet another night spent on a bus, I immediately learn the bad news at an internet point: Mussa Khan is headed North, towards Istanbul and beyond, an unspecified place along the land border between Turkey and Greece.

“The passage through the Evros River is cheaper and safer. We have to leave immediately. The Kurdish kardash will drive us. We will see each other in Yunanistan (“Greece” in Turkish), Inshallah mibinamet ". He wrote to me in an e-mail that I had had no time to read because of the continuous transfers. It is from the day before. My discouragement is complete.

The city awakes under a pale sun. I have not slept in a bed in four days. I am so tired I am overwhelmed, and my appearance does not hide it: long beard, crumpled clothes, unsteady gait.

The huge market of Izmir is still quiet. I wander among the half-open shutters, hunting for information. Talking to the merchants, I realize that the word “Basmane” causes an undefined reaction, which is repeated at every stop: people observe me, try to figure me out, analyze me and, finally, direct me with kindness, something that would not happen with just any other tourist.

An idea slowly makes its way through my thoughts and it could actually fill the void left by Mussa Khan’s early departure, transform this dead end in a moment of discovery. Once I get to Basmane, I will pretend to be a migrant. The journey so far has laid my clothes with the ancient and thin dust of the muhajirins’ road. It may work.

The idea dies in the bud. “You are late. Boats from Izmir to the Greek islands have not sailed in six months”. Piril’s words leave me appalled, confused. The chairwoman of “Multeci Der” (Association for Solidarity with Refugees) has accepted to meet me in the early afternoon, after a brief talk over the phone.

“The first to dry up was the flow to the Island of Chios, about a year ago”, Piril continues. “But after the arrival of the Frontex fleet, the trend expanded to Lesbos, Samos and the other isles as well. Departures have sunk, our Greek counterparts can confirm that”.

Frontex is the controversial EU agency for foreign border control. For the past year it has dealt with the patrolling of the coasts and the gathering of data inside the refugee camps. There are, however, great doubts, which have arisen many times on a continental level, on its real aims and methods.

Piril quickly outlines the situation. “There are three kinds of migrants, in the city. The first arrivals  mainly come from the Horn of Africa or Maghreb: they normally request asylum and are then transferred to the “satellite cities”. Then, there are the refugees who, tired of waiting for resettlement, come here to find a job, but leave on boats if they get the chance. The largest group, though, is that of the unknown, those who were never registered. For them, Izmir is just a transit place. They get here on their own, self-sustained, or helped by traffickers”.

“What do they do once they get here?”. Piril looks up from the desk filled with notes. “They go to Basmane”, she says. Her gaze becomes more intense. “The neighborhood is full of kaçakçılars who organize the boat trips. But Basmane is now empty. The migrants who have lived there for years try their luck further North and try to go through Greece along the Evros”.

Another gigantic fiasco. I have crossed half of Anatolia and it was all for nothing. I have found nothing in Izmir. Neither Mussa Khan nor the muhajirins.

I go to the station, another night on the bus awaits me. The first bus to Istanbul departs at 11 from Basmane. I buy the only ticket left: I got lucky this time, at least.

At 9, darkness closes in upon the quiet of sunset. I drink a beer under the bus shelter, after weeks of abstinence. I reflect. The twisted streets where the muhajirins had been living until a few months earlier are at a stone’s throw.

I have two hours left in the city. I take the last sip, the can flies far. Dark alleys foreshadow Basmane’s labyrinth, which seems to magnetically pulsate in the night. I light up the last cigarette, which dies out slowly between my fingers. In the silence, all of a sudden all doubts find their answers. Before I realize it, I am already involved.

“My friend! Were you looking for me?”. Slowly getting used to the dark, the eyes reveal a white-haired profile. The face is cut by a pair of glasses kept together with scotch tape. I have been enticed.

Him: “Whoever comes to Basmane is traveling”. His eyes keep staring at me from behind the greasy lenses. He finally releases his hold. “Let’s sit down and have tea. I can help you find him”.

Events accelerate. As does the beat of my heart. I can feel my heart in my throat. No one knows I am here: I am alone in the lion’s den. The opportunity, though, is too important to let go. I accept.

Him: “Where is your friend from?”. He orders the cups of tea, looking around.

I have made my move. Among the migrants, saying “Palestinian” is the same as saying “my nationality is none of your business”. There are no Palestinian embassies, and so no way to check, either for the police or for anyone else.

We keep talking about “my friend”, both knowing that this verbal roundabout is a way that allows us not to lay our cards on the table.

Me: “He is leaving soon, for Italy. He is in Basmane because he does not have enough money to take a plane. But there are other five Palestinian muhajirins with him. Maybe together they can have a discount”.

Me: “Around, evaluating other offers”.

The sentence changes everything. The man comes closer with his chair, draws his mouth next to my ear. “Listen, do you want your share in the business?”. He gives me no time to answer. “Let me tell you straight away: if you bring me 20 harragas, your seat is free. You travel safe, with us. Did you know last year we transported 50.000 people? Afghans and Africans”. A fierce sneer gives away a toothless mouth.

“Tell me more”. With the tone of a travel agent, the man illustrates the services he provides. “We will meet at the beach, let’s say in Kusadasi. You come with the bus, so you do not attract anybody’s attention. You will find a Zodiac boat, you will be 25 people maximum. One of us drives the Zodiac until the island, it will take us 45 minutes at the most”. Then he glances over my backpack at my feet. “You can bring your luggage, too!”. Another smile.

I know he is lying. I know how much the huge responsibilities these individuals have in the death of thousands of people. The muhajirins of Van and Gaziantep have already told me everything: they get to the beach, at night, frightened that they will get caught by the police, and all of a sudden they find themselves being 50 people on a boat planned for 10. Elders, children, men, women. Many of them cannot even swim. One of the passengers, inexperienced, traces the route. The Turkish navy and the Greek coast guard pose deadly threats.

I keep silent. He keeps lying. “If the first attempt fails, the following ones are free. Until you reach your destination”. I know very well that by buying my ride to Basmane, I have no guarantee. That is what happened to Abdal Halek’s children and to thousands of migrants who have never gotten to Greece.

“Alright, but I have to talk to my friends, first”. I want to leave immediately. I have been here half an hour, too many people have noticed me. A note on a piece of paper indicates the meeting place for the following night. Price agreed: 10.000 Euros, 2.000 each. “To set the day we leave”, he adds, “we need to wait for the wind. It could be tomorrow or in a week”.

I put two Liras on the table. “It is on me”. “My friend”, says the trafficker while I am getting up, “if you treat me to a pack of cigarettes, I will take you to some friends. A Moroccan harrag has paid with a lot of hashish”. I take my things. “Tomorrow”.

I walk away quickly, without turning, to the station. I have no more trail to follow, but a vague indication: the “North”.

A thousand feelings are crowding my thoughts. The one prevailing, though, unexpectedly, is happiness: I am happy not to have to put my life into the hands of a trafficker, happy to be free. I do not know what dangers await Mussa Khan on the Evros, but the idea of him not accepting the wicked traveling conditions imposed by the kaçakçılars of Izmir comforts me.

Once on the bus, I fall asleep immediately. Cradling me on the way to Istanbul is one thought: the journey in search of Mussa Khan is pushing me to the dark corners of our time, continuously putting me to the test. Since I have lost his tracks in Van, my man keeps becoming like a mirage, every day, more and more blurred.

Though Mussa Khan’s face, the face of the thousands of Mussas traveling towards the unknown, becomes more familiar with each passing kilometer. I feel shreds of lives and stories breathing in me, shreds that were collected along their path. As much as he keeps slipping me, Mussa is no longer far away.