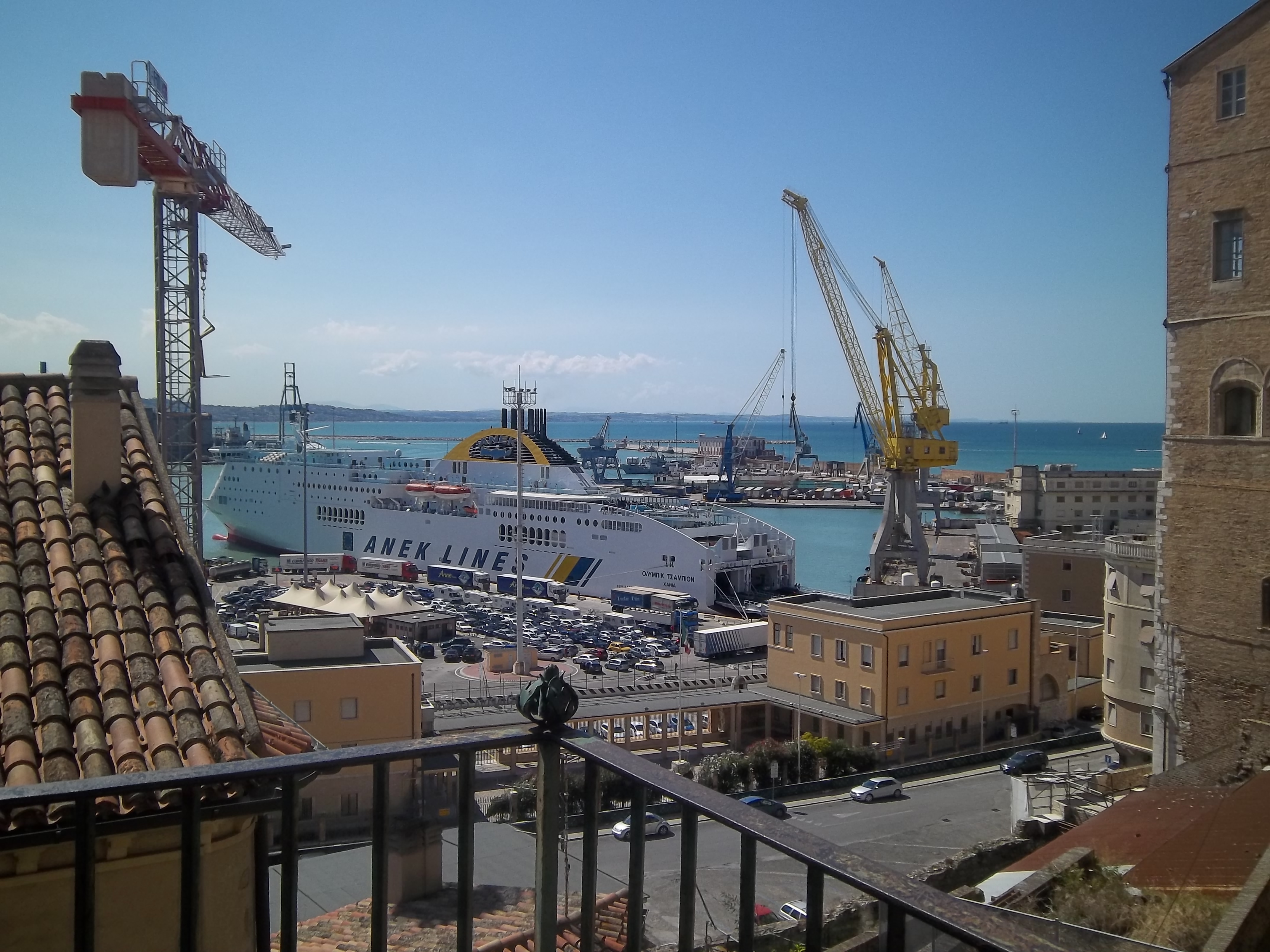 Ancona, Italy. Here is the “Europe” dreamed of by Mussa Khan. Here too, though, welcoming the muhajirins are metal fences and procedures that make applications for asylum a runaway and distant prospect

The Olympic Champion veers North-West, leaving on its route a long wake of babbling foam. The passengers are in line for breakfast in the restaurant, while trembling stains low on the horizon reveal the first stretches of the Italian coastline.

How many migrants are there on board? How many muhajirins are hiding on the trucks crammed on the ship? I observe the people in line lazily grabbing the food at the self service counter. A few meters away, just three levels below us, tens of people might be hiding in narrow spaces, going on hours without food, water or a bathroom.

Another question, though, is obsessing me: what is going to happen to Mussa Khan? What responsibility do I hold for what happened last night on the pier? I will only have the answer when and if Mussa Khan is able to turn his cell phone on: it has been off since the arrest.

One of the men that a few hours ago flung me and Mussa off the ship is right in front of me. He is serving coffee and pastries. This ship has multi-purpose personnel: while boarding, fierce hunters of migrants; while sailing, angel bartenders. “Frapa, ef charisto.” He is softened by my Greek. “Why do you use violence against irregular passengers?” A long vent follows: “My job has not been the same in years. Before, I was proud to be part of an important shipping line known in the whole Mediterranean. Now, I spend most of my time chasing desperate boys trying to get on board the ship like mice. Even now”, he adds, “my colleagues in the hold are watching the trucks within direct line of sight, so none of them can come up here and mix among the passengers so not to be noticed”.

The comparison with the mice is like a stab in my stomach. “What do you do when you do capture one of them?”. He shrugs his shoulders: “We keep them in a separate room. We give them food and water but, to be honest, it is difficult to put up with them: they are violent, dirty, nervous”. Leaning over the counter, he confides to me: “We really would not like to turn to certain methods, but it is them who force us, you know?”. I pay my coffee and go out. I squint, letting the strong gusts of damp wind caress my face.

I know all too well what happens to the boys who end up in the seamen’s hands. In Patras and Igoumenitsa I saw the black and blue marks, the bruises and the scars carved on the skin. On board the ships, there is no official security corps or external authorities: the captain is the law, and from him all authority derives.

In the metal meanders of the holds there are no witnesses: the passengers are to spend their trip in the upper sectors of the ship. Only the migrants can tell about the chasings, escapes and beatings that take place during navigation. On the upper floors, among arcades, swimming pools, deck bars and tea rooms, musical bands entertain the passengers.

Very often the muhajirins get caught by the Italian police when the ship is already at its destination. The ship on which they have traveled is the same that will take them back, according to international law. “On the way here, I spent 50 hours crouching on the axle shafts. I did not know I was bound for Venice”. This is how yesterday afternoon, on the beach in Igoumenitsa, Abdal, a Kurdish teenager, recalled this experience from two weeks before. “As soon as I entered the port, I was located by the police dogs. When the seamen were taking me back to the ship, I realized we were going too far down. It was the engines room. They locked me in there for another 50 hours, together with a Moroccan harrag. When we docked in Greece, we realized we had become completely deaf”. It took Abdal a week to hear again. That was his fourth failed attempt.

Mount Conero is the green frame of the main Adriatic port of Central Italy. Under the fiery sun at its highest peak, Ancona observes the docking of the steel juggernaut. The passengers of the Olympic Champion impatiently crowd in front of the exit, in a disorderly line. Exhausted by yet another sleepless night, I let the human flow guide me until, unexpectedly, I cross glances with Jibril. I am appalled. The Kurdish boy, met only 24 hours earlier among the muhajirins in Igoumenitsa, is walking side by side with a Greek girl his age. Past the footbridge, they stop on the quay. There are no controls. The girl gestures at one of the two cars coming out of the hold. They get in the back seat. Jibril shoots me one last glance of farewell. I do not know how he made it, but he has. He is in “Europe”.

Outside the port, an elderly man is drinking beer alone, under the arcade of a bar. I take a seat. It is burning hot, my throat dry, the shade inviting. The man is absorbed in watching the slow procession of the trucks coming out of the pier. “Is it normal that there are no agents checking the trucks?”, I ask. With a slight gesture, the man calls the waitress and asks for another glass. “It is Sunday”. He fills the glass and gives it to me. “It is like this every Sunday: the few policemen that are here remain shut up in their offices enjoying the air conditioning. Usually, though, controls are scrupulous”. Then, with a skeptical look, he adds: “Due to security issues, in just a few years the Port of Ancona has totally changed, and with it the whole city”.

For forty years, the man worked in the shipyards in Ancona. A life spent on the quays. “Unfortunately, they raised this damn fence a while ago”. Even though it is not decorated with the barbed wire that the fences in Greece are so rich of, another high iron barrier rises on the other side of the road, interrupting the continuity of the port and completely blocking access to the sea. “This area of the city was full of life: it is a dead end, now”. He concludes, “Ancona used to be a city by the sea. No longer such today”.

The fence lies still under the sun. Even though I had noticed it other times, I had never really understood its real function before this journey with the muhajirins. A barrier for irregular migrants right in the historic center of an Italian city. A bitter fact. How far, from now on, will I go interpreting the elements of the land I live on? How far have the leaders’ closure policies gone, using the excuse of security? I pay for the second beer, but with a request: “Let’s change the subject”.

Monday. The office of the Italian Refugee Council (CIR) is on the second floor of a building next to the port. The operators are very busy. “A ship is landing soon, and at least one of us has to be there when police controls are carried out on the quay”. Ancona is the only Adriatic port where CIR operators have access to the port area during landing maneuvers and maybe assist policemen when they perform controls on board the ships. “The CIR has the responsibility to guarantee that asylum procedures be performed correctly”. One of the lawyers tells me about the daily work of the Council. “With an irregular traveler, the first elements to assess are age and health conditions. When they are sick, minors or women in advanced pregnancy, the most vulnerable categories, we enact facilitated procedures”.

Often, the age teenage migrants declare does not coincide with the age presumed by the policeman entitled to the check: the boys that declare themselves to be minors are brought to the hospital and undergo a radiological examination of the wrist. “However, the margin for error remains huge”, the lawyer confesses. “That kind of examination only provides an indication on age, but according to some experts, the margin is higher than three years”. Policemen usually give the boys the highest age possible. For those who are considered of age, the reconsignment to the captain is almost inevitable. “Unless they explicitly request political asylum”, the lawyer adds.

This last statement holds the huge contradiction underpinning the whole procedure. The policeman that locates an irregular migrant on the quay cannot, by law, ask them if they have come to Italy to be granted asylum, and therefore protection from the State. Neither can the CIR operators. The muhajir has to autonomously declare they are asylum seekers or explain that the reason why they have come here is to escape a conflict, persecution or a threat.

I leave, even though I have so many questions I would like to ask. I leave right because I fear the answers: inhumane, academic, distant light years from the real world the muhajirins live in. I try to imagine the mood of a muhajir: he/she has spent 30 or 40 hours in the scorching hot belly of a ship, is thirsty and hungry, frightened by the uniforms of the policemen and the noise of the trucks, disoriented by all the people coming and going at the port, and the barely comprehensible language of their interlocutor and has to quickly answer the questions that will decide their destiny.

Many of the Afghan muhajirins scattered along the 5.000 kilometers that lead from Van to Ancona have only known war, in their lifetime. That does not mean, however, that they ascribe their wretched escape directly to war. Very often, indeed, it is the poverty caused by the conflict that is considered the ultimate reason to leave the country. When interrogated, an Afghan migrant might answer that they are fleeing hunger, not the conflict. Authorities, though, do not consider escape for economic reasons a sufficient element to grant access to protection procedures. The asylum roulette takes a heavy toll of innocent victims.

I get on the train to Rome. It is there, in the Afghan muhajirin camp at the Ostiense station, that Mussa Khan would have gone, had Europe not turned its back on him two days ago. I am instantly overcome by tiredness, as has been happening for the past two weeks every time I relax. Before giving in to the impending sleep, though, I make yet another attempt: in my call log, I search for Mussa’s number. I press enter. I hear it ringing. “Kardash!” “Mussa! Are you not in prison?” “They released me. I am going back to Athens. Maybe I have found a way to get to Europe, but I need your help again”. We talk a while, until my credit runs out. Then, heartened, I let the deaf rolling of the train lull me until I fall asleep.