Mussa Khan. The other side of the acropolis 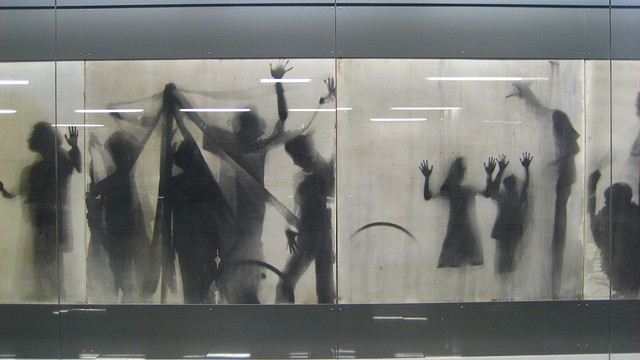 Athens. The place where democracy was born hides a dark and painful side: it is the streets and squares where the muhajirins live illegally, waiting for a future that never comes. A black hole that swallows lives and destinies, where Mussa Khan seems to have gotten lost

Athens. From the Katehaki metro station, waves of hectic people pour into the still sleepy neighborhood. I recognize very few Greek faces, among those crowding the coaches: Africa, Asia and the Middle East seem to have arranged to meet on this train.

“Afghans know very well the difficulties that await them in Europe. The muhajirins that have settled here constantly inform friends and families on the foul living conditions in Greece”. Ibrahimi turns off the monitor where pictures are running: wretched migrant camps scattered in the center of Athens.

“In the past few years many muhajirins, exasperated by extreme poverty, have accepted voluntary repatriations financed by the International Organization for Migrations”. Ibrahimi continues, “But they only stayed in Afghanistan for a few weeks at the most, to then face the terrible journey to Europe again”. After a moment of pause, the thoughts reach the rather obvious conclusion: “The thing is, for us Afghans there is no alternative to escape. To live in fear is too high a price to pay”.

A young doctor from Ghazni, Ibrahimi belongs to that poor 0,003% of asylum seekers that has been granted refugee status in Greece. He arrived in 2004 and, together with a group of muhajirins, he founded the “Afghan Association in Greece”, a multi-purpose center which provides health assistance, education, material aids and practical advice to migrants.

“The most serious problem is forced illegality. This country does not allow refugees to straighten out their position and become legal”. Sitting on one of the benches in the place where every day he gives Greek and English lessons to muhajirins, Ibrahimi tells the dreadful story of Petro Rali. “It is the only police station where you can seek asylum. Applications are only accepted on Saturdays, only 20 at a time, at the most. Every Friday night, migrants from all over the world crowd in front of the office to participate in this absurd lottery. Men, women, children, elders. An exhausted humanity. The line in Petro Rali has already killed three in three years”.

“The real emergency, though”, Ibrahimi concludes, “is of a social nature. The crisis is taking the worst out of this country. Every night is a war, for the muhajirins: the youngsters from the extreme right wing, organized in small groups, attack camps armed with crossbars, fire bottles, knives. And when the muhajirins are injured, they certainly do not go to the hospital for treatment”.

The taxi enters a silent spider web of tree-lined roads, an oasis of green after the oppressing heat in the city center. The UNHCR has its offices in one of the small villas scattered around the neighborhood. On the opposite sidewalk, though, something disturbs the still quiet of this place.

“He has been like this for six days, but no reporter has come to see him. He will die here, for no reason”. Hamid, an Iranian refugee, is lying on the ground with his lips sewn with a thick suture thread. It is hard to look at his disfigured face, shrunk by a week of total fasting.

Vahid, also Iranian, has spared himself the dreadful pain of the suture only to be able to communicate, but he is on a hunger strike as well. “We arrived in Greece seven years ago. We escaped from Iran for religious reasons. Ever since, we have been living like bandits, every night looking for a place to sleep. We cannot go back, but we cannot travel towards Europe either. We are tired of living hopelessly. We are not scared of dying”. From the tent that Hamid and Vahid have set up on the sidewalk, an old copy of the Bible in Farsi comes out.

“We understand the reasons for their protest, but we have no power of intervention”. Seeing me in her office on the opposite side of the street, the UNHCR press agent Ketty Kehayioylou explains the situation: “In 2009, the Greek government cancelled the petition against the decisions of the commission that analyzes asylum applications. Therefore, to protest against such a violation of a fundamental jurisdictional safeguard, we decided to withdraw our representatives from the commissions. We are now waiting for the newly-established government to enact a new law, thereby restoring the petition. In this transition phase, though, we are still outsiders”.

I go back outside. Hamid is following me with his stare. I have so much to ask him, but I prefer to keep silent. The expressiveness of his badly-sewn mouth is stronger than any explanation. In front of the closed gate of the United Nations, under constant control of the private police, time goes by slowly.

When I am about to stand up, with a gesture of his hand Hamid asks me to take a picture of him. “I can’t, you are a refugee. If I showed your face, I would put you in danger. If anyone is searching for you, they will have concrete elements to find you”. His hands gather in prayer. A gesture I had not seen in a long time. Tears are only stopped by his advanced state of dehydration. “Tamam. As you wish”. I take a picture and leave.

Wandering in the streets, sleepy in the early afternoon heat, I think to myself that the true reason why I did not want to photograph Hamid’s monstrous face is that I would have preferred to forget about him as soon as possible.

I wander in the night, getting ready for the most difficult encounter, the one with Omonia. Athens’ acropolis, now and then visible among the dark profiles of the buildings, radiates a strange yellow light. My headphones are playing Ahmad Zahir’s music, the Afghan singer-songwriter most loved by the muhajirins in Van: the memory of those nights on the plain helps me keep the contact with Mussas Khan alive, now that his tracks are so hard to follow.

As every nightmare, Omonia is only frightening at night. When the sun is high, it is just another one of the many chaotic squares in this city. But at dusk, drug dealers, prostitutes, smugglers, thieves, drug addicts, shady people, spies, migrants and traffickers pour out into the darkness that welcomes and protects them. Exchanging glances means to ask or to offer, to sell or to buy, to have or to want. Nothing is casual, in the disarray that takes hold of the neighborhood.

Sitting in the middle of the square, the Pakistani forgers offer Italian, Turkish or Spanish identity cards for 50 or 100 Euros. Kurdish traffickers sell rides to Brindisi or Venice for 2.000 Euros. Moroccan boys push hashish and cocaine on the four corners of the square and in front of the metro exits. Nigerian prostitutes sell themselves in one of the most crowded streets, checked on by their pimps nearby. Like meteors, policemen on motorcycles do a quick round of the square, disappearing in the long Athens night. From above, the acropolis is still radiating its yellow light.

I higher the volume of my headphones. A boy, maybe Arabic, is running through the traffic, followed by two people. He is suddenly run over by a taxi, and rolls on the floor. Adrenaline gives him the strength to keep running, but his face is disfigured. The three of them disappear in one of the alleys.

Nearby, an armored bus is parked with its engine on. I try to get close, but the policemen do not allow me. My Italian documents spare me unpleasant consequences. Beyond the glass and steel grating wrapping the bus, I see the human load being taken away: migrants.

I keep going up front, randomly. A strange disorderly crowd is on one of the streets along the National Archeological Museum. The show is depressing. Tens of youngsters sag on the sidewalks, collapse on the benches, fall on the flowerbeds. Half naked, sweating, dirty. The volume in my headphones is at its highest. I can see the syringe still thrust in the arms of many of them.

Silence. Locked in my hotel room, I try to calm the violent flow of images crowding my thoughts. Right now I just want to leave everything and get on the first flight to Rome. The sudden sleep is an  unexpected break from it all.

In the morning, everything is clear to me. Mussa Khan is in jail, I can just feel it. We will no longer be able to travel together, nor to get to our destination together. But I do not want to stop. Not now. Too many faces, too many roads, too many broken dreams keep me going. I will keep traveling, without him, the road that leads to the muhajirins in Italy. And I will do it just like the muhajirins.

Omonia was the point of no return. I leave Athens bound to the ports on the Adriatic, Patras and Igoumenitsa: modern Scylla and Charybdis, where after you make a choice, you cannot go back, and if you make a mistake, you are swallowed by merciless whirls. There I will not stand at a safe distance observing the destiny of the muhajirins taking to the sea and tempting fate. I will live like them, smoke from the same cigarette, sleep on the same packed dirt floor. From now on, I myself will be Mussa Khan.