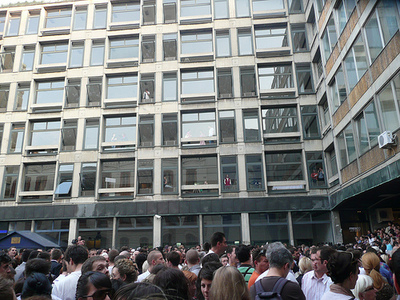 The march against violence (Limbic/flickr)

Street violence, cancellation of the gay pride, attacks on foreigners. But it was only with the death of a French football fan beaten by Serbian hooligans that Belgrade felt under siege and tried to react. Brice Taton, the young French football fan who was brutally beaten by Serb hooligans before the match between Partisan and Toulouse, died of injuries on September 30th

"Shock and sadness in Serbia over death of Frenchman", "Serbia cries for Brice", "Day of mourning for death of French youth"; these are only some of the titles in Serbian newspapers. Shame, disbelief, disappointment, anger - these were the reactions common to most Serbian citizens to the killing of the young Frenchman.

Brice Taton was beaten up on September 17th, when a group of hooligans burst in a bar in the center of Belgrade where the young Frenchman was sitting with his friends, just as he had the previous days. He did not display distinctive markings of his affiliation as a football fan, or of any other belonging.

The hooligan attack was well prepared. One of the suspects had distributed clubs and torches to the Partisan fans to be used on the Toulouse opponents, whereas another suspect was in charge of distributing surgical masks to hide the attackers' faces. After this, the Serb fans entered the bar where the Frenchman was. The attack was rapid and brutal. The hooligans hit Taton with clubs and torches, glasses and ashtrays. Even when the man was already on the floor, they continued kicking him. Taton was quickly rushed to the emergency room, where he was diagnosed with serious injuries: ribcage injuries, crushed skull and fractured right hand joint.

The incidents which followed this brutal occurrence - attacks on other foreigners, cancellation of the gay pride, street violence - contributed, amongst other things, to an atmosphere of insecurity in the Serbian capital. Unfortunately, nothing of what was going on upset authorities or the sleep of citizens until the news of the death of Brice Taton came in.

The Belgrade police arrested 11 people on suspicion of taking part in the attack on the French football fan, whereas the government announced a fight against scoundrels and criminals on all fronts. Deputy State Prosecutor, Slobodan Radovanovic, sent a letter to the Ministry of Internal Affairs asking to ban organized events, and the participation to football matches of the fans of Crvena Zvezda, Partizan, and Rad football clubs.

Radovanovic stated in the daily newspaper Politika that the people involved were not only football fans but also "members of organized crime groups, as shown by their police files". On the Ministry of Justice's initiative, the prosecutor filed a petition to the constitutional court requesting the banning of the extreme rightist organizations such as Obraz, and Serb People's Movement 1389.

The State Secretary in the Ministry of Justice, Slobodan Homen, said that the events from the last few weeks are more than enough to request banning of these organizations. "The major problem is violence against foreign citizens in Belgrade, given that it has always been an open and welcoming city. What is more absurd is that all of this takes place only months before the lifting of the Schengen visas for Serbian citizens", said Homen for Belgrade Blic.

During the searches of the flats and clubs of the members of ultra-right groups, the police discovered and seized torches and arms, along with t-shirts displaying the face of Vladimir Putin. Another fact which also testifies that there is nothing normal in Serbia is that members of these organizations showed up at the Russian Embassy a few days ago, complaining about the treatment by the Belgrade police, and they informed Russian diplomats of the confiscation of the t-shirts with the face of Vladimir Putin.

Psychologist Zarko Trebjesanin thinks that the incidents are not isolated and that the violence did not emerge all of a sudden. "Hate and aggressiveness have brewed in the metaphysic underbrush of the capital, which many psychologists and sociologists relate to the events in the nineties and with the current economic crisis which has reignited the sentiment of lack of hope, disaffection, and anger. The upcoming gay pride was only a pretext, not the motive for the violence", said Trebjesanin to the daily newspaper Politika.

"The xenophobia which sprouted during the nineties has not disappeared, and the best way to cure it is to cancel the visas, to make sure there are contacts with foreigners, that other cultures and countries become familiar". Trebjesanin thinks that the response by the government should not be government terror, given that "the hooligans deliberately provoke the government because their goal is the introduction of a state of emergency in which there is no democracy".

Overall, few in Serbia believe that the leaders of the ultra-right organizations have acted on their own, spontaneously deciding to create chaos in Belgrade. Word has it that what is going on is an organized activity whose architects are opponents of Serbia's entry into the European Union and its rapprochement with the West. They feel that the government is not stable and that the time is right, on the wave of the economic crisis, to launch violence and create a sense of insecurity which could take Serbia back into the nineties.

The Serbia of the recent weeks closely resembles the one from the nineties. People are in the streets again; marches and rallies took place in the Square of the Republic, at Plato in front of the Faculty of Philosophy, and elsewhere across the city. Invited by the Ministry of Human Rights, thousands of people marched in the Square of the Republic in memory of deceased Brice Taton; the Coalition of Youth against Violence organized a "march against violence" the day after. Marchers gave a book of condolences, signed by all protesters, to representatives of the French Embassy. They also asked for an immediate arrest, expeditious trial, and maximum sentences for all those responsible of actions which threaten the right to life, physical integrity, liberty and equality.

The French consul in Serbia, Fabrice Furmi, said he was deeply saddened by the killing of Brice Taton, but that he appreciated Belgrade's gesture. The march ended with the placing of wreaths on the monument of French-Serbian friendship in Kalemegdan Park. The Minister of Defense, Dragan Sutanovic, the Minister of Education, Zarko Obradovic, and the Minister of Diaspora, Srdjan Sreckovic, took part in the march, along with the first citizen of Belgrade, Dragan Djilas.

The President of Serbia, Boris Tadic, laid a wreath in memory of Taton in the Square of the Republic. He said he was grieved for the loss of a human life and added that Serbia is resolute in wanting to stop any kind of violence. Deputy Prime Minister Bozidar Djelic, and the French Minister of Sports, Rama Jad, also laid wreaths. "As monstrous as this crime is, the death of Brice Taton will not affect relations between Serbia and France", said the French minister.

Brice's parents, Suzanne and Alain Taton, accused barbaric nationalists of the death of their son. "Brice is dead because he was in the wrong place at the wrong time. Among the 11 people arrested are an architect, a student of law, and young men from good families. According to the information at hand, these were militant nationalists who intended to terrorize the participants of the gay pride, which was later canceled. These savages, who are politically manipulated by extremists who oppose Serbia's entry into the EU, have set out to hunt "another type of pray, foreigners", Brice Taton's parents said in an interview for the French newspaper Dépêche du Midi.

Today is the ninth anniversary of the democratic changes in Serbia launched after the fall of Milosevic. Although the optimism of the 5th of October 2000 evaporated long ago, it is the first time that Serbia celebrates an anniversary with so little hope and so many dilemmas.