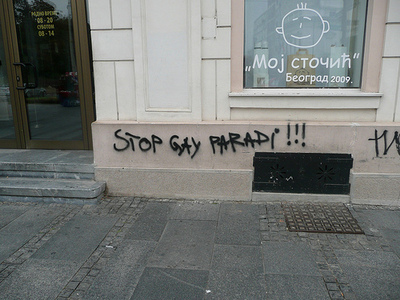 It was a lot more than a missed opportunity. The cancellation of the gay pride parade in Belgrade exposed the weakness of the state in the face of extremist groups and their threats of beatings and violence. A commentary by our correspondent

In the end, the Belgrade gay pride event scheduled for Sunday, 20 September, did not take place. Was the parade cancelled or simply postponed? Was this a defeat for the government or a reasonable decision? These are the dilemmas that have engaged Serbian society in a debate over the past few days.

A few hours before the scheduled start of the event, everything indicated that the gay pride parade would take place after all. In the days prior to the parade, spirits had been agitated and it was clear to everyone that the event would carry a very high risk. Several times, Interior Minister Ivica Dacic instructed the police to stand firm in the decision to allow a gay pride event in Plato Square, a square in front of the Faculty of Philosophy, and the widely-publicized march on Belgrade's central street.

But, absurdly, neither Dacic nor the other members of the government took into account that the gay pride parade would rattle extremist groups, who were prepared to do anything to stop the event. Had they paid more timely attention to the groups of the extreme right, or if they had at least criminally prosecuted these hooligans when they had a chance, Serbia would not currently be talking about a postponed gay pride parade and citizens would not have the impression of being hostages to groups of persons who are above the law. For years, these groups have been doing and saying whatever they want, making threats and bashing things up, interrupting football matches, setting embassies on fire, and calling for lynching of people who are "different" and of minorities. Belgrade's gay pride event has become more than just an issue of rights for the LGBT community. By now, it has become a question of the protection of human rights tout court.

The government woke up late...just two days before the parade. Their official move came only after walls around Belgrade were vandalized with slogans such as "Blood will flow in Belgrade," "there will be no parade," "Death to gays," "We are waiting for you," and the like. The government woke up only when word spread that two buses of "reinforcement" for the Belgrade hooligans were being organised in Montenegro. The government woke up only after Amfilohije Radović (Archbishop of the Serbian Orthodox Church) stated that the members of the LGBT community were of "Sodom and Gomorra." Minister Dacic said that the police were aware that groups of hooligans would demolish Belgrade and that they would "operate" all over Belgrade, some of them with the task of destroying the buses, others charged with burning embassies, others still in charge of attacking the police and teaching the "abnormal" a lesson, and so forth.
Government officials realised too late that a few prior incidents which had made the citizens of Belgrade shiver in previous week were closely related to this same increasingly violent campaign. These prior events include the following. First, a French football fan was brutally beaten and he is still fighting for his life. Then, an Australian citizen was attacked and a girl was dragged out of a bus and attacked just because someone thought she looked like a lesbian.

Only then did the government, the city authorities, and other institutions react. It is now clear that the streets of Belgrade have become unsafe; that they are controlled by groups of hooligans who can, if they want, attack those who think differently, whoever they may be. They can beat a person to death without being punished or even, as in the case of the leader of the famous group '1389', promote violence which the public prosecutor will later define as a simple political argument and not as a criminal act.

When it became clear that the gay pride parade could not take place without "blood flowing" and Belgrade being devastated, and when it became clear that government officials' support of the event came too late, the highest government officials called an emergency meeting and decided to "recommend" relocation of the parade to Usce (far from the city centre) - a place where they said the police could guarantee the security of the participants and protect Belgrade from being burned and destroyed. De jure the event was not banned, but de facto indeed it was. The organisers did not accept the change of location from Pride Square and decided, given there was no guarantee of the safety of event participants, to postpone it.

The decision of the organisers to cancel the parade was logical and, after a series of analyses, the government determined that it could not guarantee safety in the streets of Belgrade. This assessment reveals the impotence of the government in the face of groups of the extreme right. Zoran Dragisic, an assistant lecturer at the Faculty of Security Studies, told the daily newspaper "Blic" that "if on the one hand it was intelligent to cancel the event because it was clear it would not be possible to prevent violence, on the other, it was nevertheless a great defeat. The government did not stop those who were making the threats; it did not confront them in time."

This is the key to understanding this week of terror in Belgrade. What were the messages the government has sent to hooligans and criminals so far? Were the people who attacked the first gay pride parade in Belgrade in 2001 ever punished? Were the attackers who broke the windows of the Slovenian Embassy punished? Were the ones who burned the American Embassy prosecuted and punished? Did the government do enough to stop organisations which directly promote violence? Since last Sunday, these are questions that have been asked not only by the organisers of the gay pride event, but also by many public figures, experts, and common citizens.

Dragana Vuckovic, president of the organizing committee of the gay pride event, insisted on the fact that the government bowed before those who consistently threatened violence. The only solution, says Vuckovic, is that the President and the government urgently and without delay create the conditions for determining the criminal responsibility of all who make death threats to groups of citizens. Vuckovic adds that the statements made by members of the government a few days before the event give room for optimism, but that they came too late. "It is crucial that all the levels of government initiate systematic action for normalizing society," she said. "Serbia is not the homophobic country of a few days ago."

It remains to be seen this time whether the government remains decisive enough to confront the extreme right. Last Sunday, police in Belgrade detained 37 extremists for having violated the ban on public gatherings. Four have been placed in custody for up to 30 days. Those arrested include Radojko Ljubicic, the president of the administrative committee of the Serb People's Movement 1389; Misa Vasic, a member of the movement, as well as Mladen Obradovic, secretary general of Obraz,.

The prosecution announced it would request a ban on the activity of those organisations which promote violence and Slobodan Homen, secretary of state with the Ministry of Justice, confirmed that this refers especially to Group 1389 and Obraz.

"All extremists, either from the right or the left, will be tried in our courts because the courts and the police function and this is how we define the political and general security in our country, which takes into account all standards of democracy and human rights," said President Boris Tadic in a statement for radio B92.

Organisations for the protection of human rights believe, however, that the government has taken a defensive and unclear position which indirectly encourages thugs to organise. These organisations now underscore the need to promptly punish, in accordance with law, all those who promoted violence.

The opposition parties stood against the punishment of the groups of the extreme right. The Democratic Party of Serbia (DSS) insists on respect for the constitution and avoids expressing a clear position on the activities of Obraz and 1389, groups whose representatives have taken part in some public meetings of DSS. Tomislav Nikolic's Party for Serbian Progress doesn't think these organisations should be banned either. The Serb Radical Party thinks that the rumor of a possible ban of these organizations is mere political marketing.

The OSCE and the representatives of the European Union in Belgrade are embittered by the cancellation of the gay pride event and have urged the government to guarantee that all citizens of Serbia have the right to freely express their opinions and sexual orientation.