From the violence against the Gay Pride to Genoa: this is not my Serbia 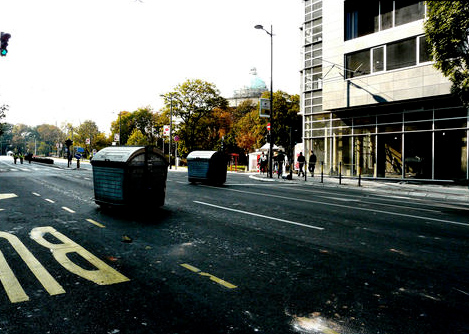 ﻿Violence at the Gay Pride in Belgrade and then the dramatic events at the Italy-Serbia football game. “Who gave you the right to define yourselves as the defenders of my Serbia? Who are you, anyway?” A commentary from our correspondent in Belgrade

Two Sundays ago, the Gay Pride parade in Belgrade. Everyone was hoping it would be a normal demonstration in a finally normal country. But it was not so. About a thousand people demonstrated in the armored-plated center of Belgrade,escorted by policemen armed to the teeth.

We had had the foreboding that there would be some incidents, but no one thought Belgrade would become a war zone. I do not like recalling the 90s,but I have to. For ten years I took part in every demonstration held in Belgrade. In its streets, together with thousands of other people, I spent three months and a half demanding that the citizens’vote be respected.

Our protests were staunch, but peaceful and non-violent. Unfortunately, it was the police who often used violence: they beat us, arrested us and terrorized us. Those were other times and I thought it would never happen again.

We were young, then. We wanted freedom. Discontent over life, we had no chance of finding a job, our parents worked months and months for 10German Marks. We were in the middle of the heaviest inflation in Europe, every day we were greeted with a new sanction. Other people had led us to senseless wars, bombs were dropped on our heads. And,again, we demonstrated our dissent peacefully.

I have no understanding for those who, today, talk to me about children living hopelessly and at the same time destroy Belgrade attempting on the life of its citizens. To us, the “enemy” was the police, who was ordered to beat with no mercy and for no reason. While beating us,they screamed at us that we were traitors, the shame of Serbia.

Today, though, the police only uses violence when strictly necessary. It is exactly for this, that we fought. Of all the terrible scenes that have been going around the internet in the past few days, one has stuck in my memory: a policeman, in full riot gear, who goes near a hooligan sitting along the Ivica street and screams: “Have you come here to destroy my Belgrade?!”.

I have no understanding for Serbism and patriotism. What patriotism are we talking about? Who the hell defined a patriotism scale of values by which I am a good Serbian only if I hate gays and lesbians, if because of discontent Iscream “kill, slit, until there is no Croatian/Albanian/gay left?”.Who gave you the right to define yourselves as the defenders of my Serbia? Who are you, anyway?

Over 60% of the people who rioted at the Gay Pride are not from Belgrade. Almost half of them are minors. All of them are members of extreme right-wing organizations or football fan groups. They were certainly not there for the“lesbians and gays”, even if they cannot stand them. Had it not been for the Gay Pride parade, it would have been something else.

Two years ago they destroyed Belgrade because of Kosovo’s declaration of independence. They beat the goalkeeper of the Serbian representative team because he committed a serious crime against humanity: he left Red Star to play for Partizan.

Clearly, all of this has nothing to do with the Gay Pride, as it has nothing to do with the Italy-Serbia game and the fans. Aleksandar Tijanic, deputy editor and head responsible for Radio Television of Serbia, says: ‘This is ageneral test for something far bigger’. No one dares say it, but Ithink the majority of people is thinking there will be an attempt ata coup d’état.
The citizens against the Gay Pride were not in the streets of Belgrade, on Sunday. They, who believe the parade for gay pride threatens Serbian traditional values (whatever that means), had organized the “family march” in Belgrade the day before. The members of extreme right-wing organizations were there,on Sunday: 1389, Obraz, Dveri and the like, as well as members of extremist fans of Red Star, Partizan and Rad.

They were very well organized, like a true paramilitary formation. One of the minds of the organization,the famous Mladen Obradovic, waited for the hooligans in the Zeleni Venac square, to then push them towards the police lines. Obradovic was arrested and brought in prison and when he was searched, he was found to have the list of all the rioters on him. “Spy” scooters were riding around the city, informing the areas where the police was more vulnerable. Everything had been organized in detail, as was the withdrawal of the hooligans at one point

So it was in Genoa,for Tuesday’s Italy-Serbia game. On all front pages, thatindividual, tattooed up to the last inch of skin, with a hood,fluttering the barrier at the stadium, giving orders to the other hooligans, cutting the protective netting.

I haveb een to many games at the stadium and, as far as I know, those are not clothes you would usually wear at a sports event. So what? Thosepeople were already very well organized when they got there.

Theytook out their crossbars, firecrackers and smoke bombs. They camefrom Belgrade and other Serbian cities to show once more that theyare not afraid of the State, that they will try and take control of things. To be more precise, when I say “things”, I mean power.

Of course, they got so far as to the incidents.Obviously, no one in Belgrade thought the riots would continue in Italy, even though the Serbian Football League had been saying it for days. Of course, they did everything so that Hillary Clinton wouldnot see any of that delirium reveling in the Serbian capital two days before her visit. These two high-risk events kept the police busy for two full days.

This, though, should not be obvious at all! For years we keep our eyes closed and behave like fools. As though the seattackers were an isolated case, we claim that every country has its hooligans and, oh, poor hooligans, they have no prospects and so they have fun doing something. As we keep our eyes closed on the consequences of the 90s, as if now, by entering the EU, everything will settle. And, by the way: we will never leave Kosovo.

Stop. We cannot go on like this.Everybody knows in Serbia there is a significant group of people who do not like democracy, even though it is only a mere attempt at democracy, for now. It is clear to everyone that someone must have financed what happened in Belgrade and Genoa. We are not crazy, we know someone organized it all. And if the Government does not deal with this, now, everything will fall into ruin. It serves no useful purpose to arrest these people: prisons are already packed, and they will come out of there neither better nor smarter.

If it can be of any use to you, forgive us if we have been unwelcome guests. If it can influence you in any way, this certainly is not the majority of Serbia. If it means anything to you, today the citizens of Serbia are, as many other times during the past twenty years, humiliated and disheartened.

All these excuses in the name of those who define themselves as Serbian really make me nauseous.