Serbia, pots against the regime 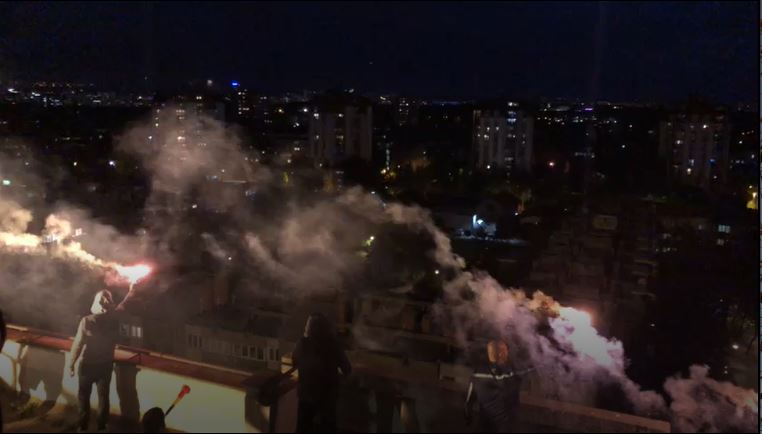 While Serbia is awaiting the revocation of the state of emergency, some citizens have been protesting against the government by beating on pots from the balconies for days. On the other hand, hooligans loyal to power roam the rooftops threatening public security and democracy itself

Pending the lifting of the state of emergency, proclaimed due to the Covid-19 pandemic, and the political elections, also postponed for the same reason, Serbian citizens and authorities are losing their patience, and the situation is periodically on the verge of open conflict. After eight years of autocratic rule – during which freedoms and civil rights have increasingly deteriorated, while a small circle of people has practically taken on the role of institutions – Serbia is deeply polarised between a corrupt, arrogant power and a weak opposition that is constantly being branded by President Vučić as "enemy of the state".

Some decisions taken by the government to deal with the pandemic have been experienced by many citizens as yet another pressure from the ruling elite. Forced to stay indoors because of the curfew, in the last few days many citizens have started to protest by beating on pots from their windows, as this has become the only way to show that they exist.

Immediately after the first protests, supporters of the ruling party led by President Vučić (Serbian Progressive Party, SNS) climbed the roofs of buildings in some Serbian cities, lighting stadium torches and shouting from loudspeakers hostile messages towards one of the main opposition figures – Dragan Đilas, leader of the Party of Freedom and Justice (SSP) and former mayor of Belgrade, regarded by the leadership in power as a symbol of the previous government.

On the evening of Sunday, May 3rd, Đilas, apparently upset, said in a video posted on his Twitter account that on the street where his family lives, in the heart of Belgrade, some people threatened him by shouting from the speakers: "Đilas, thief". Some witnesses said that the hooligans, once they got off the roof where they had lit the torches, entered the town hall, which clearly suggests that everything was organised by the leadership in power. Despite being called upon to intervene, the police did not react in any way.

Beating on pots is a traditional form of protest, often used by the Serbian opposition during the 1990s to express its dissent towards the politics of then Serbian president Slobodan Milošević. Smoke bombs, on the other hand, are used by hooligans on stadium stands, and hooligans in Serbia are controlled by Aleksandar Vučić. This link between ultras and Vučić is well known to Serbian citizens: every now and then, the president "hires" hooligans to intimidate dissenting citizens. This time, some officials and members of the Serbian Progressive Party joined the hooligans.

Election campaign during the state of emergency

On March 15th, a state of emergency was introduced in Serbia due to the coronavirus pandemic with a government decree. A part of the public has pointed out that some measures approved by the government are illegitimate and violate the constitution, starting from the decree introducing the state of emergency and the ordinance on movement restrictions, up to a recent provision that criminal proceedings can take place via Skype.

The severe restrictions on freedom of movement mainly concern people over 65 who, at the beginning of the epidemic, were able to leave the house only one day a week from 4 pm to 7 pm to go shopping in certain shops. All other citizens can leave from 5 am to 6 pm when the curfew begins, during which only those in possession of a specific authorisation can leave the house.

Last week, the government announced that the pandemic in Serbia is approaching the end and that some restrictive measures will be lightened because, as the competent authorities have said, the number of new infections is decreasing. The return to more or less normal life has begun with the reopening of hairdressers and fitness centres; the elderly are allowed to go out for a walk three days a week, in specific time slots, for maximum 30 minutes; bars and restaurants should also reopen this week. A curfew is still in effect at the moment.

While they were locked in the house, Serbian citizens followed the news about the pandemic, especially on television. In a recent survey carried out by the Ipsos SM agency, 57% of respondents said they trusted the information from television stations most. In Serbia, the most followed broadcasters are controlled directly by the ruling coalition, and President Vučić has used them to carry out his election campaign, formally "interrupted" with the introduction of the state of emergency. According to a recent study carried out by the Social Research Office (BIRODI) in Belgrade, in the second half of March Vučić was the most present politician on the main television stations, with 15,050 seconds – 63 times more than the main opposition figure, Dragan Đilas.

Noise against the dictatorship

Since the introduction of the state of emergency, the Serbian opposition has been rather silent, apparently believing that it was not the time for political clashes. However, as the emergency containment measures were eased, citizens' discontent with the decisions taken by the government has grown stronger, as has their need to express their dissent aloud.

On April 26th, the civic movements Ne davimo Beograd [Do not let Belgrade d(r)own] and Građanski front [Civic front] invited citizens to join the initiative Digni glas: Bukom protiv diktature [Raise your voice: With noise against dictatorship]. Since that day, every evening, after the 8 pm applause to healthcare workers, many citizens throughout Serbia, from their balconies and windows, beat on pots, blow in whistles, play loud music, and make noise in protest against Vučić's regime.

The protest has been supported by all the opposition parties, but this is not an action organised by the opposition. Rather, it seems that the opposition has joined the citizens because it shares their discontent. The current regime starkly resembles Slobodan Milošević's; it is as if the citizens had resumed the protests carried out in the distant nineties, when current president Aleksandar Vučić was in government.

The attempt by the leadership in power to introduce censorship; the arrest of journalist Ana Lalić because of some articles in which she reported on the situation in Serbian hospitals; the disappearance of institutions; decisions made by a small circle of people; the suspicions, but also concrete evidence of corruption  and conflicts of interest involving some members of the Crisis Unit for the containment of the spread of the coronavirus – these are just some of the reasons for the discontent of Serbian citizens.

The Serbian police has so far sanctioned around 7,000 citizens for violating movement restrictions, including some pensioners who had moved away from their house more than allowed during their walk, some farmers who went to work their land, and some teenagers who violated various restrictions.

However, to date the authorities have not deemed it necessary to clarify who and according to what criteria has granted the supporters of Vučić's party the authorisation to roam the roofs, undisturbed, during the curfew. It is only known that one person was arrested for igniting smoke bombs in Šabac, one of the few cities led by the opposition. There is no information on any sanctions imposed on people who have endangered the safety of citizens and the integrity of property by lighting smoke bombs on the roofs of buildings. Instead, what we do know is that the entire operation was announced by an SNS deputy during a parliament session. After the escalation of violence, Vučić denied that his party organised the action, stating that a youth organisation is behind the story.

On the evening of April 29th , during the first ignition of smoke bombs in Niš, in the south of Serbia, some people who were on the balcony of an SNS official's house almost started a fire when the torches fell on the awning of a shop located on the ground floor of the building. Some media reported that some members of the ruling party also participated in the ignition of smoke bombs in several cities.

In some cases, citizens protested that unknown people climbed onto the roofs of their buildings, endangered human lives with burning fumes, and filmed their actions with a drone. In Novi Sad , police told citizens asking them to intervene that it was not their job to worry about frightened citizens. The day after the incident that took place in front of the building where Dragan Đilas' family lives, several hundred citizens and opposition figures gathered to protest against the violence. In recent days threats and fires by hooligans have subsided, but whether they disappear completely remains to be seen.

On the evening of Sunday, May 3rd, President Vučić announced that the state of emergency will be lifted on May 6th and curfew on May 7th. Vučić wants to lift the state of emergency as soon as possible in order to prepare for the political elections, which are expected to take place on June 21st. Any postponement of the elections – part of the opposition calls for the elections to be postponed to ensure fair conditions for all candidates – would force the leadership in power to face the inevitable economic and social consequences of the coronavirus pandemic.

While boasting alleged economic successes and the support of citizens and world powers, from the United States to China, Vučić perceives the noise and anger of citizens very well. His only response to opposition protests and the only message he sends to his constituents is his show of strength: a threat to anyone who dares to criticise him or deny him support. The most emblematic image of Vučić's power is that of fire and frightening smoke over the heads of citizens that we have seen in recent days. Serbian citizens know well – having witnessed this scenario several times in the recent past – that once the fire is out, the ashes remain.