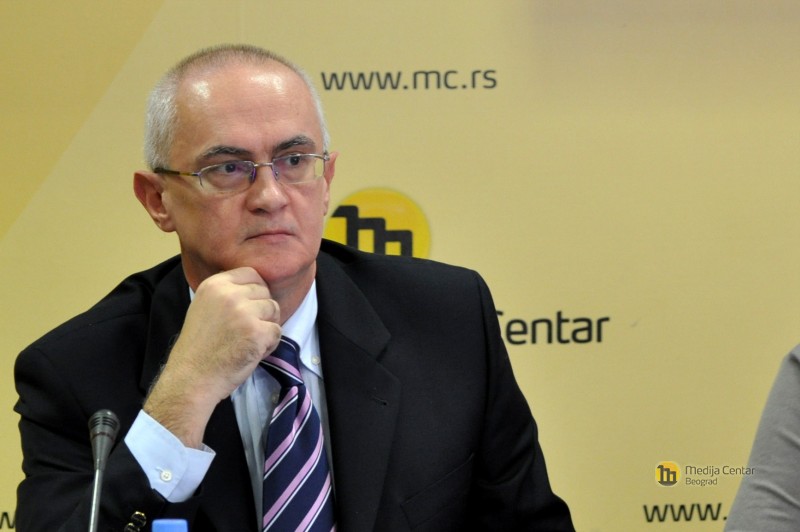 An interview with Rodoljub Šabić, Commissioner for information of public interest and the protection of personal data – together with the Ombudsman, among the most mistreated institutions in Serbia

Rodoljub Šabić has been Commissioner for information of public interest and the protection of personal data for twelve years. He virtually founded this institution, consolidating it over the years. He has been enhancing its reputation through the commitment to creating the conditions for access to information of public interest not only for citizens, but also for the media and journalists. In recent years, performing his public duty, Šabić has repeatedly come into conflict with the government.

As the end of his second mandate - no longer renewable - is approaching, many civil society representatives are wondering who will replace him and whether access to information will shrink.

Šabić was involved in a particularly tough confrontation with the establishment over the Savamala case. The case relates to the demolition of some buildings in a Belgrade downtown area, which took place in the middle of the night with the "support" of a group of masked men with baseball batons and the complicity of the police that refused to answer the calls of citizens asking to intervene. The investigation into this episode is proceeding very slowly, which is why the Commissioner requested for the curriculum vitae of Sanja Đurić, the prosecutor in charge of the case, to be made public. The Prosecutor's Office responded by filing a complaint against Šabić.

Behind this controversial episode is the intention of the authorities to "clean up" as fast as possible the area needed for the "Belgrade on Water" project, a major investment involving the United Arab Emirates. The Serbian Ombudsman found that the refusal of the police to intervene at the request of the citizens was a violation of the law, which earned him, just as it did Commissioner Šabić, harsh attacks and accusations from the government and its media circles.

Since you were appointed twelve years ago, you have met resistance by virtually all governments over this period. Do you find it harder to carry out your assignment today, at the end of its second term, or was it more difficult at first when it was necessary to build this institution from scratch?

I am currently in my second term, which expires at the end of next year. Yet, it is very difficult for me to give a categorical answer to your question. In these twelve years, many things have happened, the situation changed constantly. By the way, the process of building this institution is still ongoing. Today, compared to the beginnings, the Office of the Commissioner has much more human, material, and logistical resources; it enjoys great authority and strong support from civil society; it can boast a high percentage of success in the actions taken. At the same time, however, the reluctance of the authorities to accept the Commissioner's decisions, especially those concerning some particularly delicate cases, is stronger and more apparent than ever. Likewise, those bodies of power that are legally required to provide effective support to the Office of the Commissioner are increasingly ignoring their obligations, or "executing" them in a selective, symbolic manner.

On the basis of your experience, do you feel that there is an interest by the parliamentary majority (or government circles) to appoint an independent figure as your replacement?

I think that there is a minimal, purely theoretical possibility for this to happen. There are many factual elements that play against this hypothesis. Moreover, in several recent cases, supposedly independent roles within the Constitutional Court, the Electronic Media Regulatory Authority (REM), or the Anti-corruption Agency were appointed to individuals with obvious links with political parties or powerful government officials, although this is against the law.

Were the problems that you had to face during your two mandates as Commissioner a consequence of the lack of understanding of the importance of access to information of public interest for the good functioning of a democracy, or simply of the reluctance of the institutions to make all relevant information available? Which of these two attitudes prevails?

There are many factors that hinder the exercise of the right of citizens to access public information, including the misunderstanding and underestimation of public opinion, the conservatism of power representatives, and their distorted view of their role, institutional arrogance, but also a conscious intention to conceal in the eyes of public opinion their incompetence, inefficiency, irrationality or, worse, maladies, criminal acts, and corruption.

For your work, you have never received any state honour, but you did receive 19 complaints against your proceedings. How do you comment on this?

The 19 complaints you mentioned only concern the last 12-18 months, when the interest of the prosecutor of the Republic for my activities has greatly increased. Over the last twelve years, we have a total of 30 complaints. Out of the 14 cases closed, 11 complaints were rejected, while in three cases the Commissioner's decision was annulled – not for material and legal reasons, but for "insufficient" reasoning. In two of these cases I reaffirmed my position by providing "stronger" reasons which were accepted by the court. In the third case, the claimant waived the request for access to the information, resulting in the extinction of the trial.

As for the fact that I have never been granted any honour by the state or by the government, this is in a way curious, especially since in these twelve years I did receive many prestigious awards from civil society. The fact that none of the governments of these years has ever given me any accolade is for me a special acknowledgment.

Accusations made against you by the Prosecutor of the Republic include one concerning some of your inquiries regarding the Savamala case. What lies behind this decision – a misunderstanding of the role of the Commissioner, the attempt to curb questions about this delicate story, or something else?

I do not like to speculate, but what is certain is that this accusation can hide various unpleasant things, including what you mentioned. Whatever the reason, this case has become farcical, which is why I have defined it publicly as an oxymoron, a legal absurdity.

The accusation moved by the Prosecutor's Office regarding the Savamala case concerns an alleged "violation of the law to the detriment of the public interest". The norm I allegedly violated is a completely anachronistic provision on "professional secrecy" contained in the Procurements Act, which has lost its legal force under the new law on privacy, which constitutes a lex posteriori specialis and does not make any mention of "professional secrecy".

Another irrefutable and equally important fact is that the accusation against me was moved when not only the curriculum vitae of the prosecutor in charge of the Savamala case – which was the subject of my injunction – but also those of many other substitute prosecutors had been available on the website of the National Council of Prosecutors for months. The National Council of Prosecutors is chaired by the Attorney General of the Republic, who also chairs the Public Prosecutor's Office. The fact that a decision by the Commissioner on information of public interest, prescribing for the curriculum vitae of a prosecutor to be made public, is defined as a "breach of law to the detriment of public interest", while the curriculum vitae itself is regularly available on institutional websites, can only be qualified as an absurdity, a legal oxymoron.

Do you know of situations of this kind in other countries where this institution is present?

In some countries, yes, as I know of other situations of conflict that I also experience. However, I do not think my colleagues from other countries are forced to face defamatory campaigns, often involving insults, vulgarities, and very heavy threats, carried out by some media or through groups of so-called "bots" acting on social networks. This seems to be our sad peculiarity, which has now reached an incredible extent.

Does the current regulatory framework allow for a greater strengthening of the Commissioner's figure with respect to state bodies and political and economic power centres? Is there a need to change some points?

Yes, something has to change. We will have to adopt those standards that, as far as the independent monitoring and regulatory bodies are concerned, are now affirmed in the democratic world we want to be part of. For a start, it is necessary to ensure the constitutional recognition of the Commissioner's figure and competences, and to introduce a new mechanism for their appointment that enables a greater involvement of civil society, replacing the existing mechanism, which is virtually, if not formally, fully controlled by the political parties.