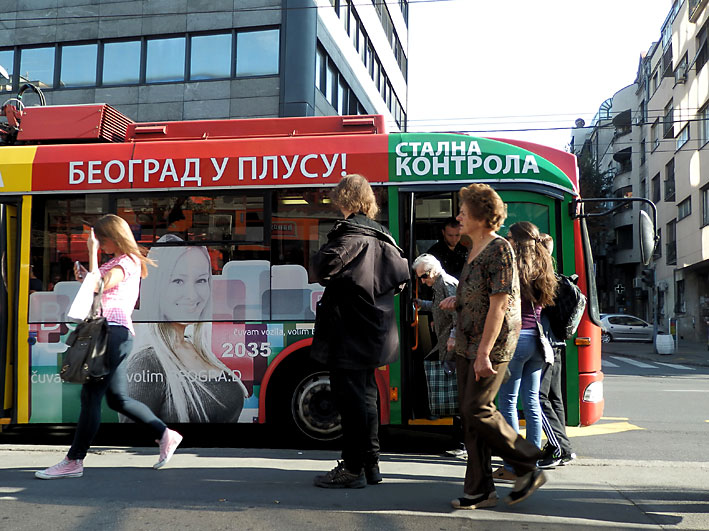 A few months ago, Belgrade introduced the BusPlus system, which was supposed to revolutionize the city's public transport. But technological innovations have only masked the inefficiency and poor state of public transport. And violence against those who do not pay the ticket is increasing

For a few months now, Belgrade citizens have faced disruption, inefficiency, and increasingly frequent abuses connected to the city's new public transport system, the BusPlus. In order from last February, the system requires that passengers equip themselves with a magnetic, rechargeable smart card, which at the time of boarding must be 'passed' on the electronic displays installed in every bus and trolleybus. In addition, by sending a text message one can learn about the arrival times at each stop, and those who own a smartphone can download the inevitable app from the dedicated site. In order to reduce queues and facilitate the process, passengers are required to enter only through the front door and leave only through the middle or rear doors, as the gigantic green or red signs remind them. A staff member also travels on many vehicles to 'assist' the flow of passengers and make sure all are in possession of a valid travel document.

It would seem an advanced public transport management system, in line with the solutions adopted in major European cities. Yet, the glitter of electronic devices and 'integrated services' hides a number of unresolved issues that often make the experience of using public transport unpleasant to say the least. To begin with, many buses and trolleybuses, especially on peripheral lines and extra-urban areas, are in poor maintenance. Obsolete carriages, torn seats, broken glass, and dirt are the norm, so much so that the satirical site Njuz.net presents as frames of an alleged documentary on BusPlus some retouched images of the ramshackle coach of the legendary film Ko To Tamo Peva?

Moreover, over six months after its introduction, the electronic system is still not working as it should be. The displays are silent and do not yet provide any information to passengers, are rumoured to quickly exhaust the vehicles' batteries, and were inexplicably installed at the output doors too, while the smart card is 'swiped' at the entrance. Finally, a few days ago, the company which collects the personal information of users (Apex) turned out to have made improper use of it, forcing Commissioner for Personal Data Protection, Rodoljub Šabić, to intervene.

The BusPlus terror: who watches the watchmen? 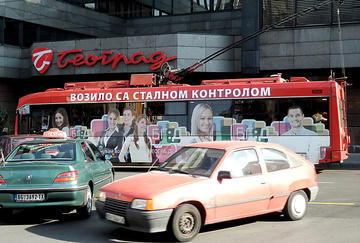 Poor maintenance, technical errors, and misuse of users data, are unfortunately only a small part of the problem. What most worries those who use public transport in Belgrade is the daily violence generated by the system, which earned it the nickname BusPlus teror, the 'BusPlus terror'.

The most common and slightest form of violence are the arguments and skirmishes between the control staff and the passengers who, unconvinced of the utility of the new rule, persist to get on through the “wrong” doors. Far more threatening, however, are the controls of tickets (or smart cards) by the municipal police (Komunalna Policija). In certain stations located on the main access roads to the city centre, packs of officers in blue uniforms stop buses to carry out a control on the passengers. The procedure is inquisitorial in manner, and it is not uncommon for municipal police officers to be found guilty of abuse, both verbal and physical, to the detriment of passengers who do not comply. Harassment and cases of abuse are indeed on the rise, as testified by the growing number of incriminating videos shot with mobile phones on popular online media.

The latest episode concerns a student who, after refusing to leave the bus, is beaten by two policemen while the other passengers witness the scene, frightened and helpless. Another shocking testimony came from e-Novine journalist Istvan Kaic, who was found without a ticket, arrested, and detained for hours in a police station. These episodes are made even more disquieting by the fact that, despite its name, the municipal police is not a police force itself, and thus does not have the authority to search or use violence against citizens, as noted by Stefan Aleksić on the Peščanik portal.

From 30 September 2012, a ride on Belgrade's public transport costs 70din (0.61 euro) 10din more than before, while the monthly season ticket has risen from 2680din to 3220din (almost 28 euro). The price of the ticket for special categories (high school students, university students, unemployed, retired and internally displaced) has not changed. Elementary school students and students of special schools don't pay.

On the official BusPlus website there are no precise indications on the costs of the fares out of town.

It is hard not to relate these episodes of violence with the problem of social exclusion. In a country where poverty is widespread and unemployment has reached alarming levels, not paying the ticket (free-riding) is more often a necessity than a choice of convenience. It is inevitable that the introduction of strict disciplinary action is perceived as an affront and injustice. The very fact that the checks are carried out almost exclusively on the outskirts of the city, as a sort of checkpoint, means that the most affected are commuters who live in the suburbs and go to the centre every morning to work. This increases the gap between the city centre, rich and practically free of controls, and the suburbs, degraded and patrolled with intransigence.

As if to make matters worse, the company that manages BusPlus has recently launched a campaign in blackmailing tones. Announcement appeared that the frequency and the very existence of certain lines will depend on the number of tickets stamped against the total number of passengers. In other words: only the lines used by well-off customers will be maintained in full working order, while those used mostly by those who can not afford to pay regularly will be decreased or even suspended. The campaign is even more shameful in the light of the fact that BusPlus does not even have the authority to make this kind of decision, which is competence of Belgrade's Directorate for Public Transport.

In the face of this intimidation campaign, the citizenship has not been watching. In July, public protests were held under the banner Narod protiv BusPlus-a ('the people against BusPlus'). The media, especially online, have given wide coverage to the many abuses occurred in recent months. Unfortunately, the indignation and protest do not yet seem to have had tangible effects. But one thing is certain: if in the relatively prosperous Yugoslavia of the 80s harassment by the controllers was a source of hilarity (as in a famous scene of the film Kako Je Propao Rokenrol, where the inflexible controller Super Ridja is ridiculed by urban superhero Zeleni Zub), in today's Serbia they are a symptom of social conflict and marginalization. And they are not funny.