Mashuk 2010, a youth camp in the Caucasus 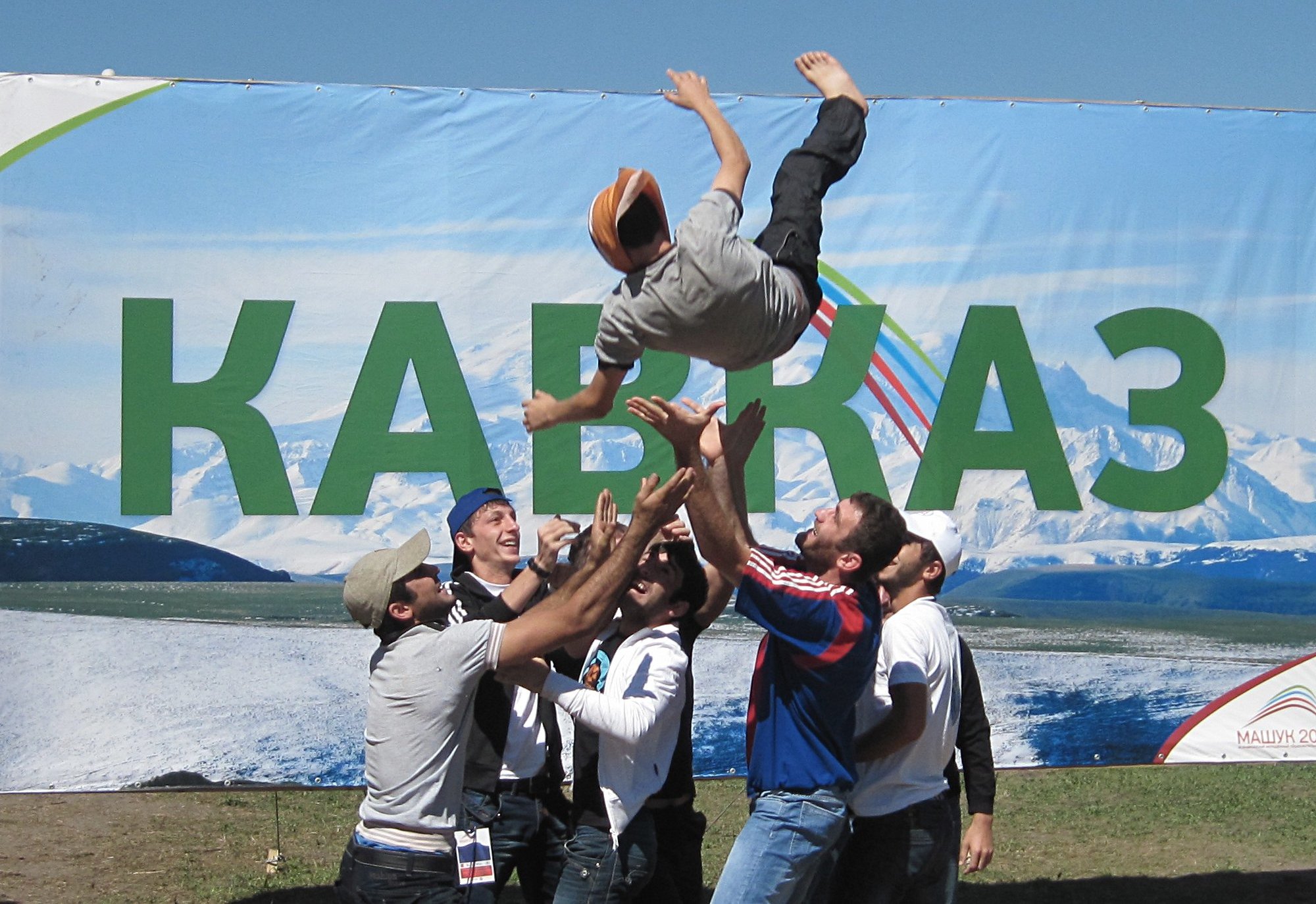 Last August, the youth forum “Mashuk 2010”, the first summer camp promoted by Moscow's government and solely devoted to young people from the Russian Caucasus, was held in Pyatigorsk, an old spa town in Russia’s North Caucasian Federal District. The event focused on training for cultural interaction and support to youth entrepreneurship

Last August, the youth forum “Mashuk 2010”, the first summer camp promoted by Moscow's government and solely devoted to young people from the Russian Caucasus, was held in Pyatigorsk, an old spa town in Russia’s North Caucasian Federal District. The event focused on training for cultural interaction and support to youth entrepreneurship

On 12 November 2009, in his annual parliamentary address, the Russian president Dmitry Medvedev announced his support for “a camp where youth from all over the Caucasus would have the chance to meet, study, and have fun together.” Ten months later, just outside spa town Pyatigorsk in southern Russia, “Mashuk 2010” started, a forum for 2,000 young people from the territories of Northern Caucasus (Karachay-Cherkessia, Kabardino-Balkaria, North Ossetia, Ingushetia, Chechnya, Dagestan, and Stavropol), plus Abkhazia and South Ossetia.

The camp had two main declared goals. First, to offer youth from all over the Caucasus an opportunity to meet – many participants belonged to national groups with a conflicted past; therefore, the programme included training for intercultural interaction. The second aim of “Mashuk 2010” was to encourage youth activism and entrepreneurship in an economically weak region, with the more general goal to give hope to young people who hardly see opportunities for personal fulfilment in their homelands. In fact, unemployment rates in the Northern Caucasus reach over 50%, with political instability and terrorism discouraging potential investors.

All the forum participants had the opportunity to prepare a business or socially relevant project, consult teachers and experts in order to improve it, and finally take part in a competition where experts would rate projects according to feasibility, risk, effectiveness of presentation, etc. Financial support and implementation advice was promised to the 60 most highly rated projects. 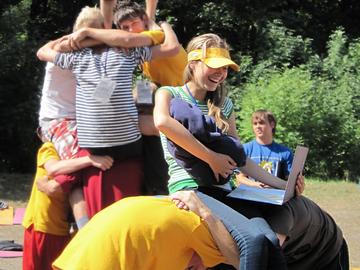 Click on the image to see the gallery of Mashuk 2010

Participants presented widely disparate projects. A Karachay young woman unsuccessfully sought support for opening a restaurant in Moscow with the main dish of Chyčin (a typical regional bun). More successful ideas included Farid Magomedov's plan for creating a beekeepers association in Dagestan in order to commercialise high-quality mountain honey, or Chechen Alig Nučaev's project of building a “teachers museum” in Grozny to stress the social importance of this profession and show respect for those who perform this role. However, the financial support does not seem to meet the expectations created by the organisers. Each project could receive a sum between € 1200 and 5000 – an important contribution for a small volunteering project, but likely not enough for implementing the ambitious, innovative ideas submitted by participants.

Small steps, not without troubles

These resources are bound to increase. Vladimir Putin already ordered a budget increase for Caucasian youth's projects from 10 to 100 million rubles (from 250,000 to 2,500,000 euros). This year's limited budget apparently resulted from cautiousness – an attitude characterised by the choice to organise the camp on a hyper-protected plain at the feet of the Mashuk mountain, away from the areas most plagued by conflicts and terrorism.

Reaching the forum required crossing two checkpoints, the first one over 1,000 metres from the camp. The surrounding woods were constantly guarded by armed security. The participants' bags were searched carefully and any potentially dangerous tool, including forks and spoons, was taken away. The extreme preoccupation for safety was not without reason, even in a quiet spa town like Pyatigorsk: on 17 August, a bomb exploded in the town's central street; 27 people were wounded but fortunately, no one died. 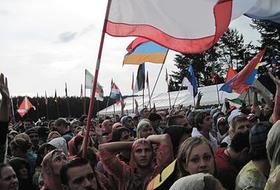 Read the dossier "Youth and politics in the Caucasus"

Despite the fear, the camp took place in a peaceful, friendly atmosphere, with almost no tension and disagreements among participants. Yet, despite the omnipresent rhetoric about giving youth a chance for reciprocal knowledge, the participants lived in tents grouped by region of origin and most educational activities occurred in groups using the same criterion.

“Here we have representatives from republics that have very difficult relationship, and yet they sit together, like brothers,” declared Boris Gusev, head of the Russian department for youth affairs, while visiting the camp. “I believe this will change in the next years and the representatives from different regions will live and work in mixed groups, as used to happen – without problems – at the time of the Soviet Union”.

“Initiatives for young people of all nationalities were very frequent in the USSR...even though the ideological component was very strong, a significant work with youth was being done,” commented Olga Kazakova, head of Stavropol's committee for youth affairs. “When working with young people, we try to combine the best of both the Soviet experience and the contemporary European one, starting from the crucial social role of volunteer organisations in EU countries.”

However, neither the Soviet Union nor the independent Russia has ever had a camp like this, with the participation of young people exclusively from the Caucasus.

“It was a very important, pioneering initiative,” says Ramzan Ugurčiev, head of Ingushetia's youth parliament and participant in the forum, “But the problem is that the event was managed by people from central Russia who do not understand the Caucasus' specificities. They have experience in managing even bigger camps than this, but they do not realise they need to be more flexible in their approach. Next year, people from the Caucasus should be the ones to organise the event.”

The forum did not go by without complications and organisational problems. Specifically, in the second part of the camp, the number of actual participants was significantly smaller than originally planned (around 650 instead of 1000) and the delegations from Abkhazia and South Ossetia did not arrive. However, “Mashuk 2010” is certainly an important event because of its features, size, and ambitions, as well as for the huge political support received.

This was not the only summer camp for Caucasian youth in 2010. Over the last few years, and especially in 2010, there has been a boom of summer camps mixing training for youth activism and entrepreneurship with entertainment. In addition, these camps share a common feature – the patriotic, pro-government propaganda centred on the symbols of the state (national anthem and flags) and the current political leadership. Large posters of Putin and Medvedev dominated the camp's main stage and representatives of government party Edinaja Rossia (United Russia) had the chance to introduce “Mashuk 2010” participants to their “patriotic club”.

“It is an authentic fashionable trend,” candidly admitted Anton Volodin, general manager of “Mashuk 2010”, “but this stems from the fact that our country's leadership understood that investing in youth is crucial for the development of Russia and especially the Northern Caucasus.”

Never before were so many camps and forums organised partly or completely devoted to the young people of the Russian Caucasus. Along with Seliger, the main forum at the national level with around 20,000 participants over the summer, several more specific camps took place. From 18-23 July, Nalchik (Kabardino-Balkaria) hosted the forum “Kavkaz 2020”, organised by Molodaja Gvardija (“youth guards”), the youth section of Russian leading party Edinaja Rossia for around 1,000 participants from all over Russia. From 23-31 July in Dombay (Karachay-Cherkessia), the Russian Congress of Caucasian Peoples held the forum “Together is better”, with 200 young leaders from all over the Northern Caucasus.

At the regional level, several centres in southern Russia organised camps of this kind, such as “Volga 2010” in Volgograd and “Region 93” in the Krasnodar territory. Even Irex Russia, an NGO financed by the US government, organised in Kabardino-Balkaria camps for “young leaders” from Northern Caucasus with around 200 participants.

The summer of forums continued in September in Astrakhan with the camp “Selias 2010”, devoted to young people from the Caspian Sea area, with participants from the Northern Caucasus as well as Kazakhstan, Turkmenistan, Iran, and Azerbaijan.

The organisation of summer camps propagandising the idea of success and the importance of being competitive is characteristic of current politics in Russia. The government's message to the youth is clear: “If you want to be successful, get busy. Take part in a forum and be active. You will help yourself and your country.”

And then – it was the summer's trendiest fashion.

This article is part of the research project “Youth in the Northern Caucasus: associationism, identity, and patriotism in a complex, multi-ethnic context”, financed by Fondazione Cassa di Risparmio di Trento e Rovereto