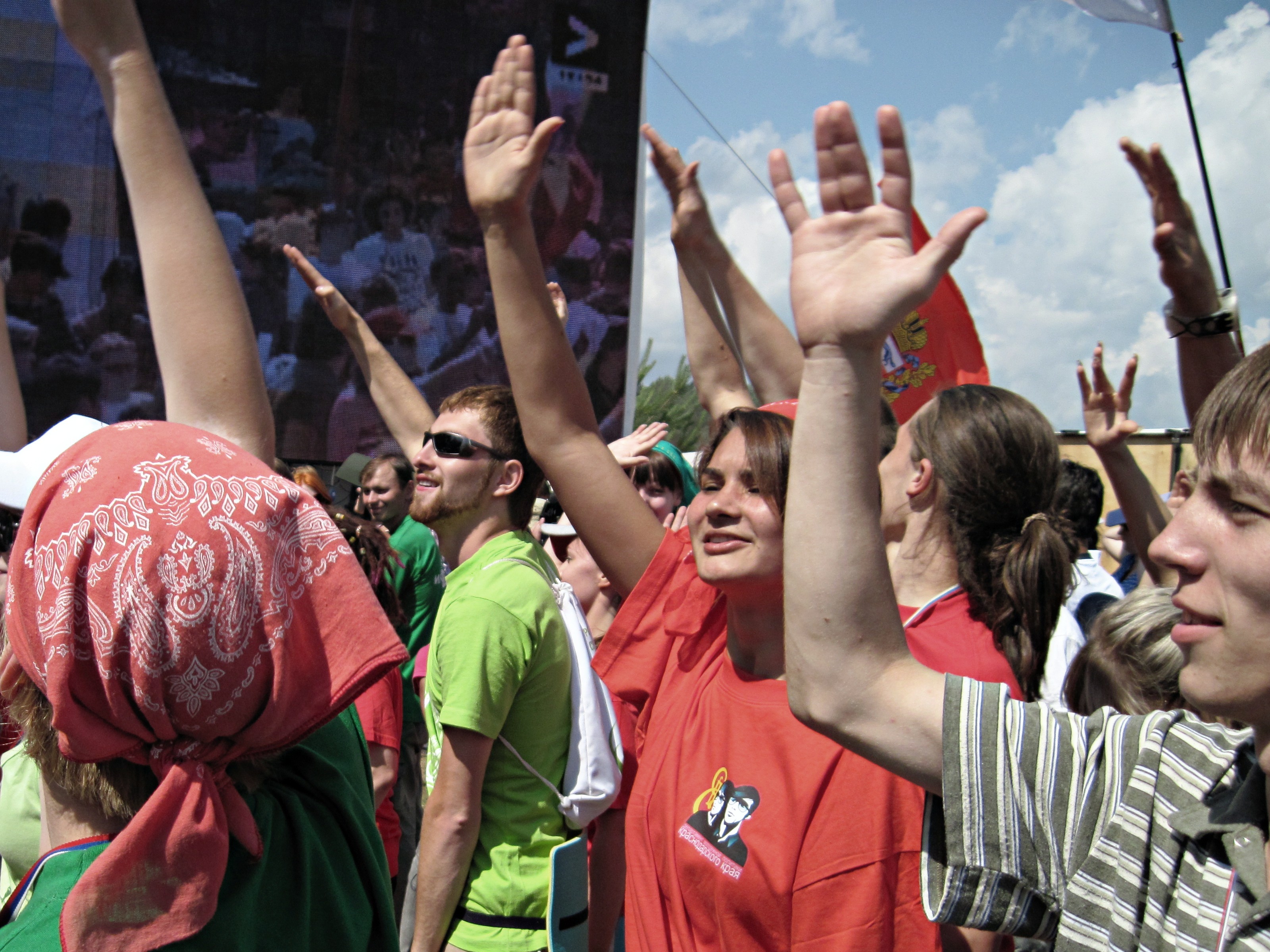 Thousands of young people from all over the world took part in a camp organised by the Russian government. A portrait of today's Russia, a country looking for openness and international recognition, where development and innovation are strictly tied to the Putin-Medvedev governmental “tandem”. A reportage

Young Egyptians do a traditional dance. Then, the Azeri, Algerians, Indians, Chinese and Nigerians take a turn. Everything taking place under the benevolent gaze of Vladimir Putin and Dimitri Medvedev, whose gigantic portraits frame the huge stage. While waving disparate flags, the public enthusiastically sings and dances. Not far away, some Korean girls walk around and try to improve their Russian.

We are halfway between Moscow and Saint Petersburg, on the shores of Lake Seliger, site of an international youth camp promoted by the Russian government. More than 3000 participants from dozens of different countries joined young people from much of the Russian Federation, from Caucasus to Siberia, from Moscow to Vladivostok.

The organisers of the week of lessons, conferences and debates declare their goals as showing that Russia is an open country and “building a global community” that will see Russia as a reference point. 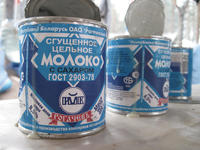 Since 2005, Lake Seliger has been the site of a youth camp for young Russians. Initially, the pro-Kremlin movement Nashi organised the event; however, the government soon began to directly control the camp, with the aim of repoliticising young people and promoting entrepreneurship skills and youth activism.

The initiative’s main elements are to encourage love for the nation, respect for the important role of the family, competitiveness and a healthy lifestyle (alcoholic beverages are strictly forbidden). In 2009, a total of 40,000 young people attended in eight weeklong sessions throughout the months of July and August. This year, the government decided to reach beyond Russia and, from 1-8 July, opened the camp to participants from around the world.

The result was a peculiar hybrid between Russian patriotism and a new internationalism, an interesting mix of a Soviet-style youth camp, a modern European summer school and a holiday resort.

At 8am, the Russian anthem serves as the wake-up call. At 8.30, all the participants gathered to be animated by pop songs that invited the youth to take an active position in order to make Russia great and free. At 8.45, boys went running and girls had gymnastic exercises. At 10am, a long day begins full of lectures, debates, meetings and conferences on various themes, from economy to ecology, from politics to cinema. Then, organised physical activities include canoeing, windsurfing, archery, climbing, mountain biking, beach volleyball. In the evening, disco on the beach and other socialisation opportunities.

The event's declared objective was to allow the foreigners to get to know today's Russia and so overcome stereotypes. Realistically though, the Russian leadership wants to have a large number of foreigner participants, in order to emphasise how much Russia has recently gained on the international level and to show off the government initiatives for the youth. 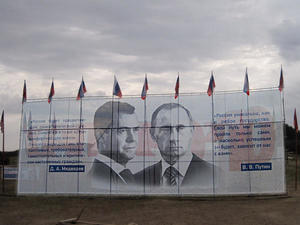 The gigantic portraits of Putin and Medvedev, hanging at every corner of the camp, sometimes followed by quotes of the two leaders, revealed another aim of the initiative: constantly remind the participants to whom they had to be grateful for all they were given in Seliger.

From a political and propagandistic standpoint, the event's relevance was emphasised by Russian president Dmitri Medvedev during his greeting from the main stage to the international guests: “The most important thing is that you understand that Russia is a marvellous country. We want it to be an open country. This is essential in order for Russia to be developed and strong. The presence of young people from 89 countries shows that we are an open country.”

The decision to invite guests from all over the world can be interpreted as a sign of openness, but the fact that the president Medvedev expressed this kind of message from a stage decorated with his own six-meter-tall portrait leaves space for some questions.

“The current development stage of the Russian democracy has some particular features,” comments Mikhail Mamonov, director of the international camp, “And, one of these is the esteem and the respect that the people have towards the leaders who have led the country out of Russia’s huge crisis in the 1990s. However, this clearly is only a phase of a long journey.”

Mamonov seems to have some doubts about the decorations of the camp and some of its features. He noted, “This event is the result of compromises and I am not entirely satisfied of how things are going. The real problem in Russia lies with the middle cadres, who often are much less liberal than the leaders themselves.”

Participants did not protest about pro-government rhetoric in the decorations or use of the national anthem as a morning wakeup call in the morning. Apparently, the young people seemed more concerned with small daily issues and with the camp’s limited hygienic and alimentary conditions. Both Russian and international guests complained less about the event’s politicisation and more about the unsatisfactory quality of the lectures and the camp's rigid rules, often applied without explanation and with the threat of expulsion.

Delegations from the Northern Caucasus were very noticeable: in the first lines of every assembly flags always waved from Chechnya, Ingushetia and North Ossetia. Chechen participants did not forget to show their loyalty for Russia and their support for the Chechen president Kadyrov, whose portrait was on most Chechen flags present at the event. 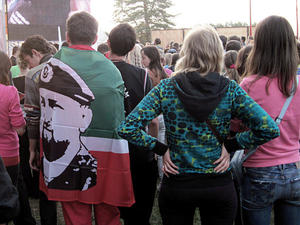 The Chechen “village” was decorated with pictures of a renewed Grozny and futuristic images of buildings in construction that soon will characterize the skyline of the Chechen capital. Rustam Gabazov, head of the Chechen delegation, proudly showed the pictures and said, “We owe the Russian government for every positive thing happening in Chechnya.”

In the Ingushetian section of the camp, the delegation preferred to show pictures of the ancient medieval towers characteristic of their republic's mountains. A young Ingush participant said, “They symbolise our people’s fight to maintain its traditions throughout the centuries. Even today, it is important that our traditions are respected. We are here in Seliger and we try to respect this place's rules and traditions. Unfortunately, this often does not happen with the special forces present in Ingushetia. They kill, kidnap and are violent. These are things that our people cannot forgive, and it is in response to these events that a common citizen becomes a rebel.”

Even though the Caucasian delegations often stayed in groups, Seliger has definitely been a meeting point not only for international participants but also for many of the regions' inhabitants. One evening, Chechens and Ingush tied together their flags, while Ingush and Ossetians were often to be seen side by side during the assemblies.

Also, Armenia and Azerbaijan were well represented and the friendly atmosphere that surrounded the camp did not leave space for rancour. An Armenian participant declared, “I believe that in the Caucasus, regional integration should be intensified, for example by creating a 'Central Caucasus Union' with Georgia and Azerbaijan. It is the only way that the Caucasus can play a role in Europe.”

The participants from the Caucasus shared the widespread dissatisfaction at the low level of the lectures and conferences. However, this was not enough to change the general positive impression on the camp.

“Well, the lectures are not that good,”, declared Maurat, a young Cherkessian participant, walking on Lake Seliger’s shores, “but the most important thing was to have the chance of meeting new people coming from all over the world.”

Vazgen, recently graduated from the Yerevan state university, shared the same opinion. “It was amazing to have the opportunity to participate in such an international camp,” Vazgen said smiling, adjusting a deck of playing cards. “Yesterday in Algeria it was Independence Day, while we Armenians celebrated the Constitution Day...A group of Algerians is camping not far from us, and we congratulated each other, as if Algeria and Armenia were neighbouring countries. However, it was the first time in my life that I saw an Algerian.”

On the Internet a lot of enthusiasm, but not just that

Blogs and social networks have many positive comments on Seliger 2010. After a few initial criticisms, mostly regarding troubles in getting the visas, in communicating with the camp's participants, and with organisers that only spoke Russian, the event's Facebook page became a collection of enthusiastic and nostalgic comments.

Those participants posting on the Internet about their experience, also shared open criticism, in particular in the Russian blogosphere. Apparently, the event’s organisers have noticed some of these comments.

Igor Samojlik, a blogger and participant in “Seliger 2010”, declared that he was asked to explain some of his online comments that explicitly criticized the camp. In a July 9th post, he writes, “Some security men collected me from a lecture in order to have an educational chat. The man in charge of the Russian youth policies was waiting for me, in a bad mood and with the printouts of my blog in his hand.”

The international camp of “Seliger 2010”, a very ambitious project realised through many difficulties and not without hiccups, gives a good portrait of today's Russia. It is easy to notice great potentials expressed by a generation willing to fulfil its ambitions and pursue a career.

But the desire of openness, innovation and development, repeatedly expressed by both the organisers of the camp and the Putin-Medvedev “tandem”, clashes with a problematic reality, characterized by systemic inefficiencies, strict rules and strong centralisation.