The Human Toll of Keeping Peace

Elections and Violence. Can Macedonia Rise to the Challenge? 19/05/2008 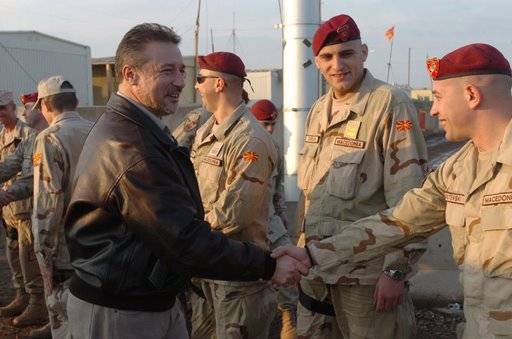 In Macedonia, sending troops abroad has become business, or rather politics, since everybody understands the political imperative of pleasing Nato and the Eu. Yet, as the country learned recently, with the death of 11 peacekeepers on their way back home, some will never return

On 12 January around noon, a helicopter of the Macedonian Army crashed outside the village of Blace, nearby the city of Kumanovo. Everybody on board, eleven Macedonian soldiers, died. They were returning home from their 6-month service in the EU military mission in Bosnia and Herzegovina,ALTEA.

The MI - 17 helicopter had already started its descent when it crashed, in a close proximity to its final destination, the Skopje airport. The extremely low visibility that day, due to the heavy fog, definitely was a factor of the tragedy.

Yet, the helicopter was a sophisticated piece of equipment, upgraded back in 2005, with advanced night vision; hardware which allowed it to fly in most difficult conditions.

Two years ago when the craft had the night vision installed ( one of four helicopters in the Macedonian army fleet which were upgraded, for a price of around USD 2 million) it was considered to be at the cutting edge of military equipment (although the helicopter itself was of older date). Only three other armies in Europe, that of the UK, France, and Spain, or total of 15 armies in the world, were said to have it, according to Macedonian media.

That is exactly why the EU mission in Bosnia wanted it. Macedonia was eager to respond the the EC request to take part in ALTEA.

"You will be contributing with something very important - helicopters, which are very important for this type of operations", said the EU's foreign and security policy chief, Mr. Javier Solana to Macedonian Defense Minister Jovan Manasievski, back in July 2006, when the deal of Macedonia participation in ALTEA was signed in Brussels.

Mr. Solana also underscored the political importance of the event, that of Macedonia being part to an EU military operation.

The tragedy swamped the country in sorrow, and it caused a serious political upheaval. The government and opposition exchanged harsh accusations. The investigation is underway, with the black boxes sent to Russia (the country of origin of the helicopter; the upgrade was done with Israeli technology) for decoding, in hope that it would cast further light on the causes of the tragedy.

Was it the pilot or the craft? As much as the answer might be of relevance to many, it won't bring the soldiers back. Macedonia for the first time felt the bitter pain of loosing its young in a mission abroad.

Sending boys abroad (the first girl was sent to Kabul in 2005) has by now become business, or rather, politics as usual in Macedonia. Parliament needs to approve deployment of troupes abroad, and it usually does it swiftly - no questions asked. Everybody understands the political imperative of pleasing NATO and the EU.

Until very recently, Macedonia itself had international military presence monitoring peace, after the 2001 ethnic conflict. The country turned from a host into sender of peace keeping troupes abroad:

"The end of international military presence, the EU Concordia mission, in Macedonia, and our partaking in the missions in Afghanistan and Iraq, demonstrate clearly that Macedonia is radically changing its position, enhancing its credibility, and showing that it can contribute to global peace and security", said Defense Minister Vlado Buckovski, back in late 2003, in relation to the country's first military contingents sent abroad.

At present, Macedonia has around 200 soldiers deployed in Afghanistan, Iraq, Bosnia, and as of 2007, in Lebanon. The balk are in Afghanistan, some 130 infantry and several medical staff; 40-50 in Iraq; the roughly 20-men pilot mission to Bosnia; and just a few officers in Lebanon.

The presence in Lebanon is symbolic in more than one way. Small in terms of presence, but significant as Macedonia's first contribution to a UN peace keeping operation.

Politics is always too tight to mention. Macedonia's decision to take part in Lebanon was interpreted as an effort to please France which runs the command there. France was reluctant about giving Macedonia a status of am EU candidate country a few years back.

Since modest start in 2003, the number of soldiers abroad has been gradually increasing, due to demands by allies, primarily NATO.

From around 200 at present, the number of troupes abroad is expected to still rise, after entry into NATO or even after receiving the invitation for membership (due at the spring summit in Bucharest, but uncertain because of Greek opposition).

The burden is difficult also financially. Military experts say at present Macedonia's military budget can not afford more than 200 troupes abroad. According to sources from the Defense Ministry, the cost for around 200-men mission abroad is around USD 9 million per year.

As reported by Macedonia press, Macedonian soldiers in Iraq held in the past the unhappy record of having the lowest salaries, among international troupes. Or second last, according to some, after Kyrgyzstan. Defense Minister Manasievski gave the troupes a pay rise of about USD 400 back in October of 2005 , which pushed the salary range in Iraq up to USD 2,300 - 2,900 (in Afghanistan they are slightly smaller). That made Macedonian military men a bit better paid that Albanian fellow soldiers, but still quite below Croatian troupes, which reportedly get around a USD 1,000 more.

The Adriatic group of NATO candidates (Albania, Croatia, and Macedonia) have already sent joint troupes in Afghanistan in 2005 (under Greek joint command) as part of SEEBRIG formation - Southeast Europe Brigade.

It is, according to some, likely that additional SEEBRIG deployment would be expected by NATO later in 2008.

Macedonian forces in Iraq were praised in 2004 by the Jane's Intelligence Review, for their successful operations of arresting rebels and discovering illegal weapons supplies south of Baghdad.

More than 30 Macedonian soldiers have been awarded military commendations and honors from other countries, for their military services abroad. Some of these account for on saving fellow soldiers.

Along with other countries from the region which want to join NATO, Macedonia has no alternative to participating in peace keeping missions.
"We send more people in missions abroad because that shortens the road to NATO", Macedonia Defense Ministers have repeatedly argued.

Yet, as the country learned only recently, some of them will never return.

As much as everyone understands that this is how it has to be, it hurts a lot. Even much bigger and stronger countries get distraught when their soldiers die abroad. For a tiny land such as Macedonia, the price these days seems ubearable