(When) Will Macedonia Recognize Kosovo? 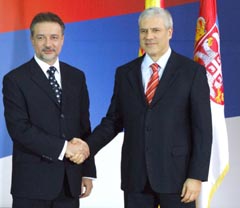 Some of Macedonia's international partners that support Kosovo's independence, recently reminded Macedonia that it is expected to recognise Pristina. The Albanian political parties in Macedonia are also strongly advocating recognition, yet the government exercises restraint

Forty-seven countries (out of 192 UN member states) have recognised Kosovo since it declared independence on February 17 2008. Twenty-one EU members acknowledge Kosovo's independence. In its immediate surrounding, Kosovo has been recognised by Albania, Bulgaria, Croatia, and Turkey. Greece has too close relations with Serbia to grant recognition. Two of Kosovo's immediate neighbours, Macedonia and Montenegro, are stalling.

Some of Macedonia's international partners that strongly support Kosovo's independence reminded Macedonia that it is expected to recognise Pristina. The British ambassador to Skopje, Andrew Key clearly stated his country expected Macedonia to soon recognise Kosovo. Unofficial reports indicate that, unsurprisingly, Washington had asked the same thing from the government in Skopje.

The Albanian political parties in Macedonia, both in the government (DUI) and in the opposition (DPA) have also been strongly advocating recognition.

Yet, the government exercises restraint. No other issue on the political agenda has ever been commented on with fewer words. For months, Macedonian officials have only stated, "We will act according to our national interest."

A very obvious reason for the reluctance is Skopje's fears of the reaction from Belgrade. Macedonia's northern neighbour has warned many times that recognising Kosovo would risk causing a crisis in bilateral relations.

Serbian President Boris Tadic met in late September with Macedonian President Branko Crvenkovski, at the sidelines of the UN Assembly in New York. At the meeting, Tadic asked Crvenkovski that Skopje not recognise Kosovo's independence. He said Belgrade would respond with strong measures, if recognition took place.

"That would be interference with our internal affairs and it would definitely worsen our relations," Tadic said.

"We expect Macedonia to continue with, at least, a policy of neutrality," said Serbian Ambassador to Skopje, Zoran Popovic, for A1 TV late August, "if Macedonia recognises Kosovo's independence, the consequences for our relations will be very serious."

Given Macedonia's fragility in international relations, and the lately aggravated dispute with Greece, the last thing the country needs is a quarrel with Serbia.

Serbia is Macedonia's major trading partner. Some fear that the recognition could, at the very least, disrupt trade relations. Possible hindrances for transport on Serbia's border (which are not impossible to imagine) could impose a huge cost on Macedonia's economy.

Macedonian Finance Minister Trajko Slavevski tried to disperse such fears recently. "The response from Serbia would likely not affect economic relations. There are other ways of expressing discontent."

Some Macedonian business executives follow the same logic. They commented that business has its own logic, which is separate from politics.

This is perhaps only partially true. Governments cannot tell businesses how to think, but they can shut borders (temporarily) with many excuses. On more than a few occasions recently, Greece has temporarily shut their border with Macedonia.

Some argue that recognising Kosovo would greatly improve the economic exchange between Skopje and Pristina. Trade is already significant, and Macedonia runs a sizeable trade surplus with Kosovo.

Some analysts say a possible attempt by Belgrade to block Macedonia would be unsuccessful. "There had been attempts for a blockade back in Milosevic's times, but they didn't work out," says Dimitar Mircev, university professor and a former diplomat.

At the end of June, Macedonia and Kosovo finally started demarcating their common border. The issue of the border had occasionally inflamed tensions both in Skopje and Pristina. Macedonia agreed to consider recognition only after the border had been demarcated. By the end of September, most of the work on the ground had been done and the demarcation should almost be complete. Immediately after the start of the process in early July, Belgrade issued a note of protest to the Macedonian ambassador in Belgrade.

After the demarcations process began, some diplomatic signals from Skopje tried to condition the recognition of Kosovo with Pristina's reciprocal recognition of Macedonia's constitutional name. Kosovo's President Fatmir Sejdiu said Pristina would not accept conditioning of the recognition.

Although political officials have been extremely cautious in signalling anything concerning possible recognition, the impression in the public and among political analysts was that the government deliberated extensively and seriously considered recognition on at least few occasions. Rumours increased several times, most recently in the second half of September, that recognition would follow within days. Each time, the Macedonian government denied the rumours.

There were some, although never strong, allegations that efforts are being made to synchronise the recognition with Macedonia's ongoing name issue with Greece -Macedonia expects greater support in resolving the issue, and that, in exchange, it would promptly recognise Kosovo. The logic makes sense. With the name issue resolved, Macedonia would automatically enter NATO and it would more easily decide on recognition. Alas, the issue was not resolved then, despite strong support by the US and President George Bush's personal support at the NATO Bucharest summit earlier this year. One should wonder why the issues would be more easily resolved now.

Belgrade is becoming particularly tense before the important vote at the UN Assembly that Serbia hopes would take her case to the International Court of Justice, which should then have to render a consultative opinion on the legality of the independence.

Serbian Foreign Minister Vuk Jeremic specifically cautioned countries from the region against any move that could compromise Serbia's hopes in the UN.

Currently, the Albanian political forces in Macedonia have been understanding. "We do not insist on a date for the recognition, we prefer to have the political climate favourable to recognition," said Deputy Prime Minister Abdulakim Ademi, of DUI.

Given the circumstance, the Macedonian government policy of "wait and see" is not all bad. Caution is needed. The government should do its best to promote good relations with Kosovo. Then, recognition would likely follow. In the meantime, the recognition of Kosovo presents a much smaller political risk for at least 140 countries other than Macedonia.