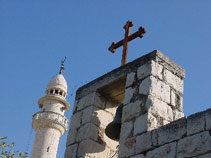 After months of procrastination, prime minister Nikola Gruevski adopted the draft bill on religious communities. The government came under pressure to strike a tricky balance: to meet the requirements of international integration and maintain correct relations with major religions in the country.

After months of procrastination the government of prime minister Nikola Gruevski adopted the draft bill on religious communities mid July. The prime minister signed the bill and finally sent it to parliament. This marks the end of a prolonged phase of negotiations with the religious groups in the country over the new legal framework for practice of faith in Macedonia.

Parliament is to discuss the bill this very summer, and the debate is not expected to be easy.

"I am convinced it would be a modern piece of legislation, which will bring quality perhaps in some aspects higher than the regional achievements to date", stated foreign minister Antonio Milososki early July.

It did not seem such an arduous task when the government embarked on it last fall. It soon became clear though that the job would not be easy. The reason is - the differences between the demands the international community and the major religious groups in the country.

The EU and the US asked Macedonia to pass legislation which will provide full respect for religious liberties. In simple term and as a matter of a basic requirement, this means, a law which will allow for unrestricted establishment and registration of religious communities. On the other hand, the organizations of the major faiths in the country, the Orthodox, Muslims, and Catholics early came to a firm consensus that - there could be not more than one religious organization for one faith.

The government came under pressure to strike a tricky balance: to meet the requirements of international integration and maintain correct relations with major religions in the country.

Clerics got angry when the government told them Brussels didn't like the original bill which protected their sovereign positions.

Prime minister Gruevski himself stepped into the talks with the Synod of the Macedonian Orthodox Church (MPC) last November. A first for a prime minister.

"We discussed the different options. I think there is some progress, but it will take a lot more", stated briefly Mr. Gruevski after the meeting.

"We reviewed the bill, analyzed it. It remains to work on it further", stated MPS's spokesman. Mr. Timotej.

The deal was worked in silence without much shared with the public. Neither the government nor the clerics spoke much. Nevertheless, some of the pastors of the MPC didn't hide their resentment.

"Do our politicians think when they bow before the international envoys", asked angrily the archimandrite of Vardar, Mr. Agatangel. "I neither want into the EU by force, nor am I a slave to the mystification of membership", said he.

In the view of the religious leaders, the West should try to understand the particularity of the peaceful religious co-existence in Macedonia.

Reality is however more political.

Macedonian public got seriously aggravated recently over the attempt of a schismatic orthodox priest to register a Serb church in Macedonia, with help of the Serbian Orthodox Church (SPC). The international community got involved, but the priest ended up in jail.

Part of the Macedonian crisis of identity is the fact that its church is not recognized by other Orthodox churches. The political weight of this fact is easily observed.

The Islamic Religious Community (IVZ) has an issue with some of the Muslim brotherhoods which operate independently, such as the brotherhood of the bektashi in Tetovo, which also owns considerable property.

According to some analysts, the anxieties of the Orthodox and Muslims in Macedonia are exaggerated. Why should they fear competition by some minor alternatives if they are confident with their followers? They should relax their rigid positions.

Last winter the bill was sent for suggestions and approval to international institutions, the Venice Commission, OSCE, and the Council of Europe.

End of last year president Branko Crvenkovski stressed that the bill is vital for the expected invitation from NATO. According to him, the support from the US Congress hinged on it.

NATO Secretary General, Jaap de Hoop Scheffer confirmed this during last month's summit in Ohrid, by saying that "religious freedoms must be respected in Macedonia" if the country is to hope to join the Alliance.

Only a couple of days later, the Vatican also voiced its support for the demands of the international community. Its chief of diplomacy, archbishop Dominique Mamberti visited Skopje early July.

"The Holy Seat believes that legislation will soon be adopted which will be in accordance with European standards on religious freedoms", stated archbishop Mamberti.

According to the director of the Commission for Religious Communities, Mr. Zvonko Micunski, the text was largely rewritten in accord with the suggestions by the international reviewers.

The last revision of the critical "article 8" came in the nick of time before the bill was signed by the prime minister.

The original article 8 provided that there can be not more than one religious organization for each faith. At the last moment, the provision was changed to read that "a church, religious community or group can only be registered unless previous such groups do not already exist". The later registrants can not have the same name or use the same symbols as the predecessors.

The other last minute big change is that the registration of religious communities is assigned to the courts. That is to say, it is their problem from now on. They will have to decide who can be registered and who not.

This likely does not console clerics who can more easily put pressure on politicians who depend on votes.

Analysts point out that the legislation is a step ahead in terms of religious freedoms compared to the existing standards in neighboring countries, two of which - Bulgaria and Greece, are EU members.

Religious leaders by and large keep a stance that novelties are not necessary in an areas which already functions well.

"What's the use of new progressive legislation, if it disrupts the relations between the religious groups, and between them and the state", says the dean of the faculty of Theology, Ratomir Grozdanovski.

" I believe that each citizen, each believer in Macedonia does feel he has full religious freedom", says Reis ul Ulema effendi Rexhepi, the chief Muslim priest in the country.

The government tried to find a compromise but it did its best to comply with the demands of the international community. The consigning of the power of decision to the courts also seems a reasonable solution for a secular democracy.

Nevertheless, the bill does have to go through parliament and MPs both go to church and have a constituency.

It will be a hot debate.