Elections and Violence. Can Macedonia Rise to the Challenge? 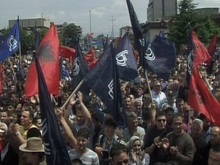 Just a few days into the campaign ahead of 1 June early elections, Macedonia is under serious temptation.The election campaign which officially started 10 May has been marred by incidents and violence since the very beginning. Macedonia has very little time to correct things

Just a few days into the campaign ahead of 1 June early elections, Macedonia is under serious temptation.

The election campaign which officially started 10 May has been marred by incidents and violence since the very beginning.

Most incidents were reported between the two major parties in the Albanian political block, the ruling Democratic Party of the Albanians (DPA) of Menduh Taci, and the Democratic Union for Integration (DUI) of Ali Ahmeti.

Incidents involving the use of firearms have been reported practically on daily basis. Exchanges of gunfire, party head offices fired at, shots at houses and shops of party members, attempts to obstruct political rallies of the opponents. A serious incident involved the complete demolition of a night club in the city of Gostivar. A man was killed in a midnight knife fight which might have had partisan pretext. All of this just in the last week.

The leader of DUI, Ali Ahmeti was reportedly fired at, during the rally of his party in the village of Rakovec, on the 12th of May. The police charged two men for the incident. One was quickly arrested and the other is at large. "They attempted on my life", said Mr. Ahmeti.

"Mr. Ahmeti uses old tricks", says Mr. Menduh Taci of the ruling DPA, accusing the DUI leader of trying to profit politically from the incident. Reportedly, the shooting was in the general direction of the DUI vehicles which were empty at the time. Still, a small child was reportedly injured.

This is the last thing Macedonia needs in this period of time. If the electoral violence continues Macedonia can kiss goodbye the invitation from the European Commission to open accession talks, expected hopefully this autumn. And that would be just the beginning. In the delicate situation the country is internationally - just had NATO doors slammed in the face at the Bucharest summit in April - Macedonia cannot afford to be labeled a laggard.

"Fair and democratic elections are the precondition for our Euro-Atlantic perspectives", said President Branko Crvenkovski before the start of the electoral campaign. "Irregular elections would a step back from our goal - EU and NATO", warned he.

"These incidents are a reason for concern", said Mr. Ervan Fuere, EU Ambassador to the country. "The elections are a test for Macedonia. We expect better, not worse elections than in 2006", said Ambassador Fuere.

"I expect everyone to do their share and make sure the campaign goes as it should", said from Brussels Mr. Javier Solana, the European Commission foreign and security policy chief.

The OSCE, the major international organization in charge of election monitoring, joined the chorus of concerns.

"We are concerned by the worsening of the security in the north-west part of the country", says in a written statement OSCE chief in Skopje, Mr. Giorgio Radicati. "Citizens must feel safe to vote on election day", underscores Mr. Radicati's statement.

The first contingent of OSCE's election monitoring mission has already arrived and been deployed across the country. The balk of them, some 250, will arrive shortly before election day. The monitoring effort will be reinforced by a significant number of local observers, as many as 3,500, coordinated by a local organization, Most.

Macedonia has very little time to correct things. If violence stopped right this moment, the assessment of the elections will have already been affected. If they continue there can be no doubt that the damage will be huge.

Prime Minister Nikola Gruevski talked yesterday with the leaders of DPA and DUI and asked them to use their influence and put an end to the violence. The diplomatic core had a meeting with President Crvenkovski the same day and expressed serious concern.

Although violence was used mostly in the Albanian camp there were smaller incidents in the Macedonian block too, indicating to a dirty election campaign.

Why does Macedonia repeat the same mistakes? The 2006 elections were assessed as free and fair, with a few minor incidents. Why can't the country rise to the challenge?

Part of the answer, but definitely not the full answer, lies with the very charged political atmosphere surrounding these elections.

If the polls are to be trusted the winners can be seen quite ahead of time and this certainly makes many people very nervous. According to forecasts, the coalition led by VMRO and Prime Minister Gruevski is a certain winner in the Macedonian camp with a difference as much as 2,5 - 3 to 1 against the opposition social democrats (SDSM).

In the Albanian camp the difference is much smaller. Several polls gave lead to opposition DUI but by a far smaller margin. However, it is clear that if VMRO wins in the Macedonian camp, they will choose to partner with their traditional ally DPA, no matter what the vote count.

This was the cause of the crisis after the last national elections in 2006. DUI won the majority in the Albanian block but did not get into the government. VMRO decided to coalesce with DPA. DUI got enraged and kept raising tensions for several months before they calmed down. This time they said, they would not accept such a scenario.

Yet that scenario is quite likely. The only reason Prime Minister Gruevski decided to go for early elections was because he was convinced of his big advantage over the social democrats. He said he wanted a stronger majority in parliament so that he could sped up reforms held by the opposition.

"This will the first time that citizens vote "for". So far they have always voted "against" a government in office", said Prime Minister Gruevski.

That might be true, but it won't be enough if the elections are seen as irregular.

"It is important that we all win, that the country wins in these elections" says President Crvenkovski.