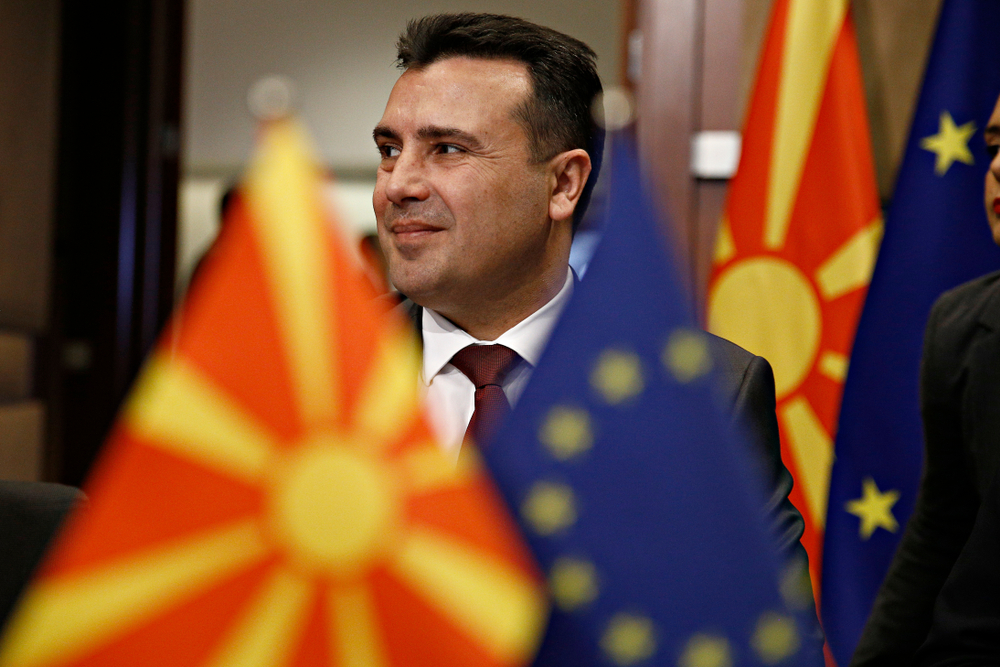 North Macedonia remains at the EU's door again, this time because of France's opposition. Disappointed with the "Macron" vote, Prime Minister Zoran Zaev tries to run for cover by calling for early elections

A "grave, historic mistake". Thus European Commission President Jean-Claude Juncker described the European Council's decision not to open accession negotiations with North Macedonia and Albania. President of the European Council Donald Tusk said that the EU failed to deliver on its promises, asking the aspiring countries not to give up. EU Enlargement Commissioner Johannes Hahn stressed that this is not a moment of glory for the EU. "To refuse acknowledgement of proven progress will have negative consequences", said Hahn. The French veto, labelled as a "catastrophic" decision that undermines the EU's credibility in Balkans, was overwhelmingly criticised by politicians, intellectuals, and organisations across Europe.

To what avail. The third consecutive postponement for the start of the accession talks heavily undermined Zaev's domestic political reputation. Zaev's narrative since he came in power was that, if Skopje delivered, it would most certainly get a date for the start of the accession negotiations. Last week's conclusion that "[t]he European Council will revert to the issue of enlargement before the EU-Western Balkans summit in Zagreb in May 2020" was all that he got. Not a date, not a start, nor a clear no – just the possibility to talk again about the possible start of negotiations. This was a political death sentence for Zaev and his government. It is no surprise that the main opposition parties were celebrating after the French no. This means that their chances to get back in power are high.

Yet, to understand the consequences of the French no, and why Zaev had no alternative than to try to reestablish his political credibility through early elections, one needs to go several years back, at least to 2006 – the year of the last on-schedule parliamentary elections, as the following five elections would be snap ones because of the political turmoil.

The road to 2020 early elections

The winner of the 2006 general elections was conservative/nationalistic VMRO-DPMNE with its then-new leader Nikola Gruevski. Portrayed as a young technocrat and modern politician, his only political experience was as Minister of Finance in the period 1998-2002. Gruevski was expected to transform the country, bringing it closer to EU and NATO – the country's strategic goals since its independence from the former Yugoslavia in 1991.

But there were three major obstacles on the road to Euro–Atlantic integration. Namely, the first and foremost were the necessary internal reforms, so that the country could meet the accession criteria. Also, there were two open disputes with neighbouring Greece and Bulgaria, EU and NATO countries with veto powers. The southern neighbour objected to the use of the name Macedonia citing historical and irredentist concerns. On the other hand, Bulgaria had issues with the ethnic, linguistic, and historical designations. Namely, Bulgaria opposed the existence of the separate Macedonian language and Macedonian ethnic identity before the establishment of Socialist Yugoslavia.

During the initial two-three years of his mandate Gruevski, along with his two junior partners, ethnic Albanian party DPA and small socialist party NSDP, focused on the reform agenda. In October 2009, the European Commission issued the first recommendation for the opening of accession negotiations. Since December 2005 North Macedonia has had the status of EU candidate country. But a year earlier, during the 2008 NATO summit in Bucharest, the first major veto had happened – a veto that would change the course of the country for good.

The Republic of Macedonia, as the country was called then, applied for NATO membership under its UN reference "the former Yugoslav Republic of Macedonia" (FYROM), together with Albania and Croatia. In support of its application, USA president George W. Bush stated that he expected all three countries to be accepted in the alliance during the summit. Yet, regardless of Bush's appeal, Greece vetoed the accession of its northern neighbour.

Faced with a dead-end for its Euro-Atlantic aspirations, as Greece ultimately pushed for a name change to lift its veto, Gruevski immediately called for snap elections. His coalition, riding on the wave of popular fury, won 63 out of 120 seats in the assembly. Following the landslide victory, he could rule alone, but instead took DUI as his coalition partner. Then he focused on easy deliveries.

First, he initiated a proceeding against Greece at the International Court of Justice (ICJ). In the meantime, instead of working on EU and NATO integration, he fully focused on identity policies erecting monuments through Skopje. Armed with the positive decision from ICJ, as the court found that Greek veto was unjust and against the UN-sponsored interim accord from 1995 in which Greece committed not to block its northern neighbour's association in international organisations as long as it applied as the former Yugoslav Republic of Macedonia, Gruevski further dwelled on the self-victimisation narrative.

In the following six years this once aspiring technocrat, with the help of junior coalition partner DUI, managed to capture the state, thus turning himself into a role model authoritarian ruler. Corruption, constant decline of media freedom, capturing the state infrastructure for personal benefits, mass wiretapping of opponents and citizens, polarising society along political, ethnic, and ideological lines, undermining civil society, and the storming of the parliament are some of his "best" results.

Citizens displeased with Gruevski's undemocratic rule organised three major protests in the period 2014-2016. First, in late 2014, students took to the streets several times against the government's plan to replace university-run examinations with state testing. Between May and June 2015, following the exposure of the wiretapping scandal, a mass protest led by opposition party SDSM occurred in the capital Skopje, only to end up after an agreement for early elections was brokered with the help of the international community. And then, from April till July 2016, the so-called colourful revolution broke out. The protests, under the motto "no peace without justice", were ignited by the controversial decision by incumbent president Gjorgje Ivanov to stop the investigation against the politicians involved in the wiretapping scandal.

It all settled down following the 2016 early elections. Although VMRO-DPMNE won 51 seats in the assembly against SDSM's 49, Gruevski did not manage to form a majority as all smaller parties refused to be in coalition with VMRO-DPMNE. Thus Zaev, along with DUI and several smaller parties, came in power on the promise of substantial reforms and a complete dismantling of Gruevski's captured state.

Instead, Zaev's government put all bets on a single card – EU and NATO integration. To unblock the road, Zaev first signed the Prespa agreement with Greece, thus changing the country's name into "Republic of North Macedonia". Then he brokered a good neighbourly agreement with Bulgaria. In a short time, he made concessions that were simply unimaginable for the previous rulers, as the political price was deemed too high. Popular opposition, predominantly among ethnic Macedonians, is high as all these concessions are seen as treasons of national interests. The math was simple: Zaev promised NATO membership and the start of EU talks in exchange for the difficult compromise with Greece and Bulgaria.

The equation (two agreements for two memberships) was supported by a long list of first-class foreign dignitaries and diplomats. Weeks before the name referendum, they visited the Republic of Macedonia inviting voters to seize the "historic chance". Even French President Emmanuel Macron supported the agreement via a recorded video message. "I strongly believe that this agreement is good for you, the whole region and Europe", Macron said, urging people to answer positively on the ballot question "Do you support EU and NATO membership by accepting the agreement between Macedonia and Greece?"

During the weekend meeting (Sunday, October 20th) hosted by Macedonian President Stevo Pendarovski, the leaders of all seven parliamentary parties defined the road-map for the coming months. Following the French “no”, they reiterated that the country will insist on its EU path as there is no other desirable alternative. Also, following the previously established rule, a caretaker government will come in power 100 days before the date of the elections to administer the process. Thus, Zaev will resign on January 3rd, and his position will be taken by Minister of Interior Oliver Spasovski, whilst some key posts will be given to representatives of the opposition.

The silver lining in all this is that, following the French "no", political elites in the country managed to broker an agreement without a big fuss and international help – quite a mature crisis management, taking into consideration past years' events. Also, the political elite was quite responsible regardless of the popular disappointment and apathy.

Pendarovski called the leaders of the largest political parties to leave their legitimate party interests aside and to reaffirm a country vision. "Now is the time to show unity around our strategic goals. The conclusions of the EU Council fall short of our justified expectations and do not correspond to previous announcements by the EU. While we are disappointed, we must soberly face a new reality", Pendarovski tweeted. Minister of Foreign Affairs Nikola Dimitrov asked for one thing – the European Union to be straightforward with the Balkan countries. "If there is no longer a consensus on the European future of the Western Balkans, if the promise of Thessaloniki 2003 does not stand anymore, the citizens deserve to know", Dimitrov said.

Out of his two promises, Zaev has managed to secure only the first. It is expected that by the early 2020 North Macedonia will be the 30th NATO member, as the ratification of the accession protocol is almost completed. The several remaining member countries should ratify it in the coming months. With such track record, Zaev will resign on January 3rd in view of April's snap elections and hoping for another four-year term on the wings of his NATO success. The most recent polls are not in his favour, though. And things would be much different if there had beena "oui" instead of a "non".