The Greek Crisis Seen from Skopje: So near, so far 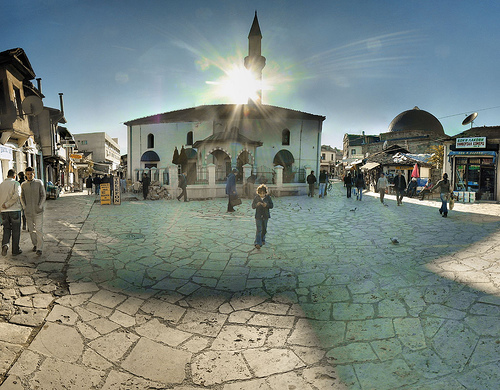 Quite surprisingly, Macedonians have little interest in the Greek crisis on the other side of their southern border. Financial authorities forecast limited risks for the country, while some secretly rejoice at the difficulties of Macedonia’s opponent in the name dispute of the past decades

Macedonia’s two top-ranking finance officials, Minister of Finance, Zoran Stavrevski, and the Governor of the National Bank, Petar Gosev, sat together with Wes McGrew, the head of an International Monetary Fund (IMF) team visiting Macedonia, and said the economy was healthy.

When asked if the Greek crisis could spill over into Macedonia, McGrew responded that he was not worried. He believes that Macedonian banks, including those owned by Greek capital, such as Stopanska Banka and Alpha Bank, do not hold any Greek government debt and do not rely on parent banks in Greece for funds. The three men stated with determination that the crisis could not seriously affect Macedonia.

The subtle and timely reassurance, according to some, was not necessary. For the time being, headlines in Skopje report little on the burning Greek crisis. The good news is that the panic is not crossing the border; however, the intriguing (and, to some extent, worrying) question should be raised why Greece’s closest neighbours have so little interest in something covered intensively by CNN and most European media.

Skopje lies only a short distance from Greece’s major northern city of Thessaloniki . Greek capital is a major investor in Macedonia. Tens of thousands of people work in Greek-owned companies all over the country.

The recent extensive media interest in placing two monuments on Skopje’s central square has greatly exceeded the media coverage of the collapse of Greek public finances.

The difficulty in predicting the course of a possible spillover could be a reason for the lack of attention. Depositors have recently received reassurance on the potential consequences for their savings in the Greek-owned banks.

Broader monetary implications have only just risen to the fore. In the past days, some media noted that the falling euro could increase oil prices (since gas is priced in dollars), which could kick off an inflationary cycle.

Most media commentary has revolved around the possible trends in the euro-dollar exchange. In this sense, the tiny Macedonian finance trading market has joined global speculations over the future of the euro. Newspapers reported Macedonians were hesitant whether to stay with the euro or start converting their savings into US dollars. Many at least try to diversify and combine the euro savings with other currencies. Ever since its introduction, the euro has been the major currency for domestic savings.

As elsewhere, nobody knows which direction the euro would take. When commenting on EU’s urgent decision to help Greece, former Finance Minister Nikola Popovski said, “I believe the turbulent days are over and the euro would stabilise soon.”

The Macedonian denar is pegged to the euro and shares its destiny. When the euro loses value, so does the national currency. The euro zone is the major trading partner with Macedonia but many imports are paid with dollars. Some companies profit from the situation (particularly those with euro-priced imports and dollar-priced exports), while others stand to loose.

Currently, the fear of possible inflation is still distant. Many have not connected the recent hikes in oil prices to the Greek crisis. If oil costs continue to rise, however, things could change.

All possible scenarios apply to Macedonia in the same way they apply to other countries in Europe. Little has been said of possible direct spillover across the border. Some noted that strikes by Greek public officials, particularly customs and border officials, could impede trade.

However, no analysis has considered how the crisis could affect the many private Greek companies in the country. The earlier wave of the global financial crisis, which hit the private sector, shut down many of the Greek companies. Thousands of workers lost their jobs as companies, which had moved across the border in search of cheap labour, failed or lost orders.

The public debt that caused the current crisis also affects private companies, many of which are major government creditors. Companies doing any kind of business with the government must wait for months before payment. In such a situation, they are sometimes forced to cut costs elsewhere.

Finally, some Macedonians gloat. Ever since Skopje declared independence in 1991, Greece has been Macedonia’s nemesis in international relations, and especially in Euro-Atlantic integration. Out of solidarity, most EU countries have staunchly supported Greece in the bizarre name dispute with Macedonia. An analyst comments, “The Greek crisis might hurt us too, but I am glad. Europe can finally reconsider its unconditional support for the actions of its spoilt brat.”

The point may be valid, but Greece is not alone in the turmoil. Other European countries also struggle. Despite efforts to deny threats, Macedonia is also not clear of danger. In recent months, the government has been raising the money to pay salaries through regular sales of government bonds at a high interest rate. Prime Minister Nikola Gruevski and his financial expert, Finance Minister Stavrevski, have been refusing to consider the idea of an IMF arrangement, because it would restrict their financial autonomy. However, according to some experts, it could only be a matter of time.