Greece, Germany and the wounds of history 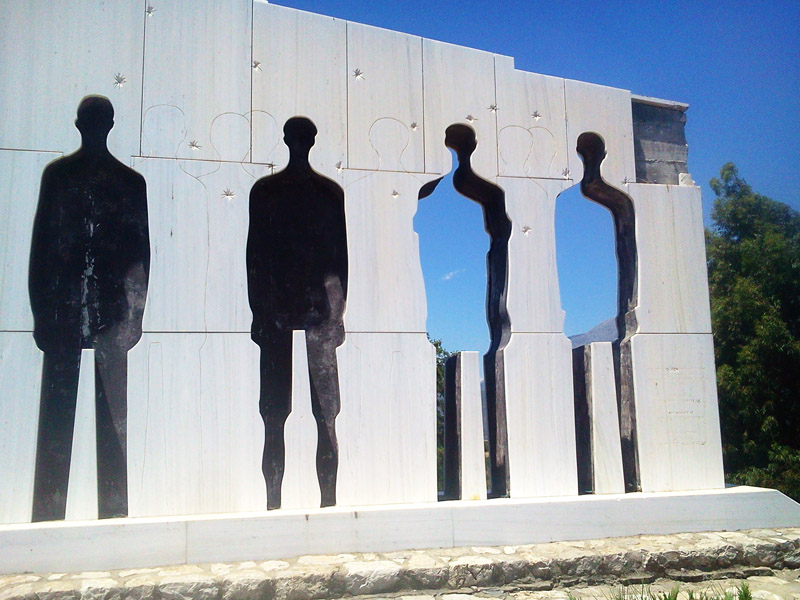 The economic crisis in Europe is stirring up animosity and distrust, especially in places marked by the wounds of history. Like Distomo, a village in western Boeotia, where one of the worst massacres in Nazi-occupied Greece took place in 1944. Here, recriminations against Merkel's austerity pair up with claims – never met – for compensation. A report

The lunar landscape of Mount Parnassus, rocky and bare. Down the winding road, in the summer heat wave, the cobalt blue of the Gulf of Corinth – motionless, silent, glittering. Athens is not far away, but Distomo is another planet. And it is here, in this hidden corner of Greece, that we can find old scars of history, fractures never completely healed, that the present economic crisis is bringing to the surface, digging up grievances that seemed vanished.

"Greece has a thousand reasons to be judged for its mistakes. Merkel's politics, however, is simple economic imperialism. I am outraged: German politicians still have a sense of revenge, a hidden desire to accomplish with the economy what they were not able to do with two world wars". Georgios Theokaris, now retired after a lifetime spent in the nearby aluminium plant, but also historian and keeper of the local memory, does not mince words.

In today's Greece, mangled by cuts and austerity policy, the empathy for Germany and its ruling class is at historic lows, the visceral passions generated by the recent football match between the two countries' national teams being the most visible and noisy evidence. On the streets of Athens, it is difficult to hear kind words not only for Merkel, but for Germany in general. Even the most oriented to self-criticism point their finger at Berlin's "betrayal".

"Germany tells us to fix the public finances, and it's right", says political analyst Spriros Rizopoulos. "The austerity policy, however, is grinding Greece. We had not realised there was a negotiation with Berlin. We thought it was a matter between friends. And friends do not negotiate, they help each other".

Nightmares of the past

In Distomo recriminations go way back, uncovering nightmares of the past. On June 10th, 1944, this quiet, marginal little village, was the scene of one of the worst Nazi massacres in occupied Greece. After a battle with ELAS communist partisans, troops of the "Polizei Panzergrenadier Division" took revenge on the village's defenceless population. Of the approximately 500 residents, 218 were killed in the houses or on the streets – men, women, and children.

"In Greece there have been even bigger Nazi massacres", says Theokaris in his sunny home. "In Distomo, however, the brutality of the killings reached its peak. No one was spared. Men were killed with firearms, children with bayonets, women were raped before being finished. This is why in Distomo, more than elsewhere, a vivid memory has remained together with the demand, the need, for a moral compensation for the losses". Over the years, citizens of Distomo, survivors and descendants of survivors, have explicitly requested the German government's formal recognition and financial compensation for the events of 1944.

"Not only those who lived through that horror, but even the younger generations will never be at peace until all this has been acknowledged", says Luokas Dimakas, journalist of newspaper "Ta Nea" and public television ERT, born and raised in Distomo. "This is not about money, but about the sense of justice so far betrayed. Many Germans come to visit Distomo and are close to us. There is no grudge against the people, but we want Germany, as a state, to take charge of that past".

With the crisis and the tense relations between Greece and Germany, the question of compensation has become even more delicate. "Germany has never asked for forgiveness for the crimes committed. Our claim for compensation is above all moral, money is only a symbol", says school teacher Mina Kotsou, 55, as we sit in a bar in down-town Distomo. "Merkel, of course, does not want to give a penny. It would be a dangerous precedent, since Germans have sown ruin all over Europe during the Second World War".

Past and present touch in Mina's agitated voice. She lost two uncles in the massacre of Distomo. Today, with the excess of austerity that the Greeks (and others) attribute to Berlin's short-sighted policy, Mina saw her salary drop from 1300 to 680 Euros per month. "This winter", she confesses, "I kept my coat even at home. There was no money for heating".

To date, claims for compensation have had little luck. In July 2011, the European Court for Human Rights in Strasbourg rejected a case brought by four citizens of Distomo, children at the time of the massacre, against the decision of German courts that had declared their request for compensation inadmissible. In February 2012, the UN Court of Justice in The Hague reasserted the immunity of the German state against a 2008 decision of an Italian court that had ordered a compensation for Italian citizens and Greek victims of Nazi violence, including citizens of Distomo.

While Greece and international donors (with Berlin playing a central role) battled over the deal that traded a rescue package for structural reforms and cuts, the Greek government, then led by George Papandreou, had been actively part in the defence of Distomo citizens' demands. Berlin reacted angrily. "What can I say, I simply do not understand Athens' stance", said German Foreign Minister Guido Westerwelle, emphasising the Germans' lack of enthusiasm at seeing reopened issues considered closed forever. Distomo, however, does not want to stop. "The judgement of the Hague brought some positive results", says Dimakas. "For the first time, it recognised the existence of a crime against humanity coupled with a question of reparation. We will not stop".

A breath of wind comes to relieve, at least for a moment, the stifling heat. "It is under this tree that the first victims of the massacre fell", says bar owner Hristo Filipou. "We Greeks are now bitter about the derogatory headlines in German newspapers, the accusations, the insults. After the war, the world has contributed to the reconstruction of Germany. Today, Germany is once again a rich and powerful country, but this does not give it the right to impose its will on everyone. And they should return in part what they have received".

"We, too, will do the same", he says thoughtfully. “The Greeks are not unreliable. If we are given a chance, we will return every loan, penny for penny".