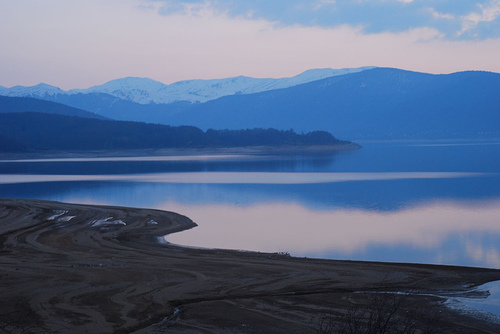 There are places on Earth where nature did not skimp on beauty and abundance. One such place is Mavrovo in Macedonia. In such places, perhaps more than anywhere else, there is a need to sensibly balance resource use with conservation and land management for the benefit of future generations. Two Italian NGOs, UCODEP and GVC, have been on the forefront of such an endeavour in Mavrovo.

Founded exactly 60 years ago in 1949, the 73,000-hectare National Park Mavrovo is the largest of three national parks in the Republic of Macedonia. About an hour and a half west of the capital Skopje, the Park stretches between the towns of Gostivar, Debar, and Kicevo, and shares partial borders with Albania and Kosovo.

Nature has blessed this place. Nestled between the mountains of Bistra, Shara, Deshat, and Krcin, Mavrovo is also home to what is perhaps the most beautiful river in the country, the Radika. Mavrovo park also features a man-made lake of the same name. Mavrovo Lake trout is a known delicacy for fish lovers and a substitute for the endangered Ohrid trout. The lake itself, albeit small, is staggeringly beautiful.

“It would be great to promote sailing on the lake,” says Fabio Checcacci of GVC. “Tourists would love it.” Partner on the project managed by UCODEP and funded by the Italian Foreign Ministry, GVC is responsible for promoting local economic activity in the Park. The populations of the few villages around the lake have depleted over the years and the residents are mostly elderly, but a few young people have resisted the popular drive to migrate abroad or to the capital. The Mavrovo economy is dominated by several larger hotels, but for the locals, a major source of revenue is remittances.

Close to half of the Park’s territory is forested, and tourists are advised to beware of bears. Wolves, which are plentiful, can be a real pest to livestock. The Park also hosts the almost-extinct Balkan lynx [lynx lynx martinoi]. Featured on the Macedonian 5-Denar coin, being very rare and difficult to spot in the wild, it is considered a national treasure.

Together with its partners, UCODEP has just wrapped up the first year of a project that aims to bring Mavrovo up-to-date with EU standards in national park management. The three-year project, started back in 2008, has a total budget of three million Euros. Half of this is financed by the Italian Foreign Ministry, 35 percent is contributed by the Park Authority, and the rest is co-financed by the implementing partners: UCODEP and GVC. Local municipalities are also partners in the project.

“A major component of the project is to outline a new and modern management plan – compatible with EU standards - for the Park”, says Daniele Pedreti, leader of the project and representative of UCODEP in Macedonia. This is a comprehensive strategy which, among other things, includes creating complete registries of all the flora and fauna and plans for their conservation, plans for the utilization of the forest, tourism, the local economy, the financial management of the Park, and so forth.

“The forest management plan is an issue of critical importance”, explains Pedreti. At present, the Park authority, which is completely self-financed, generates over 90 percent of its revenue from selling timber. Lumbering is careful; selected trees are cut one by one. “Still, the share of the Park's revenue that came from timber was much smaller 30 years ago”, says Pedreti. He also explains that the model of complete self-financing for national parks is rather rare. Only Serbia has it, in addition to Macedonia. In Europe, national parks are generously funded by governments.

Even though wood cutting in the Park is tightly controlled, the fact remains that timber is the sole major source of revenue. UCODEP and GVC want to change this. The way to go would be to stimulate tourism and local economic activity. Mavrovo is a well-known ski destination in the country, but the season is short and snow has been scarce in recent years. Creating the conditions for tourism throughout the year and promoting the Park internationally are important objectives. The project plans to invest a lot to meet these goals. A camp will be built, including wooden cottages. Tourist info points will be set up, and the Park will be promoted at international fairs.

In addition, the project plans for important awareness-raising and environmental education work to be conducted in local schools. It also comprises a strong waste management component, including investment in equipment. A number of tractors (for reaching difficult-to-access dump sites) and garbage containers have been supplied by the project. Education is critical. Anyone who has traveled through the park is perfectly aware of this. Nature is beautiful, but man has been negligent. There is no systemic pollution in the vast Park area, but garbage produced by households and tourists is everywhere. This is result of low awareness combined with lack of control. Macedonia has strict regulations on and tough fines for littering, but cannot enforce them effectively. “Changing the mindset of the people remains a crucial challenge in projects of this type”, says Pedreti. Control and sanctions are necessary, but not sufficient. The cultural change takes longer and is more difficult to actualize. ‘At first we wanted to try to implement a system of full garbage differentiation and recycling, but we decided to take it one step at a time”, says Fabio Checcacci from GVC.

International cooperation is also an important part of the project. GVC has recently paired the Park with a counterpart in Italy, Parco Tosco-Emiliano. The two parks have agreed to work together on future projects. By 2011, when the project is slated to end, the National Park of Mavrovo should be better prepared to eventually become a true European natural park. The natural resources are all there; they just need to be harmonized with the human ones.