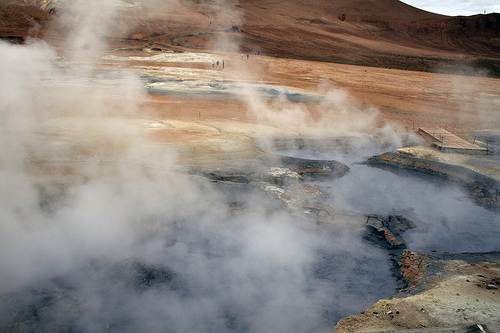 Serbia is rich in geothermal fluids, a source of clean energy that could be tapped with additional knowledge and better tools. A consortium of Tuscan municipalities and Serbian local institutions are working together to make some progress

Local institutions in Tuscany and Serbia are sharing best practices to manage Serbia's geothermal resources and develop high-potential yet severely underdeveloped technologies for tapping them. This cooperation concept was the basis of an agreement between CoSviG (the Consortium for the Development of Geothermal Areas in Tuscany), the Italian company Icaro, the Chamber of Commerce in Leskovac, and the municipalities of Vranje, Bujanovac, and Medveđa in Southern Serbia.

The next step: an international conference - to be held in Belgrade before summer - to gather together Serbian and Italian representatives of research centres, local and national institutions, and potential investors. “In Serbia, geothermal energy is very underdeveloped despite its high potential, although it relies on clean technologies complying with Kyoto's standards”, explains Nicola Tiezzi of the consultancy firm Icaro, based in Cortona. The firm is active in the Balkans with projects aimed at supporting sustainable economic development.

The cooperation with Serbia was launched by the CoSviG consortium, which includes 14 municipalities, three provinces, and some mountain communities in Tuscany. The Consortium was created a little more than twenty years ago, according to Loredana Torsello of the International Centre for the Transfer of Technological Innovations [CITT, an association of research institutes and local institutions led by CoSviG]. “(CITT) played a key part in enabling municipalities to partly reclaim the governance of their territories, to shape and diversify the use of resources, and to seek the best ways to capitalise their potential,” Torsello says.

“Geothermal energy is renewable, low-impact, constantly available, and does not require importing, but needs specific maintenance,” explain Isabella Nardini and Domenico Montanari, geologists with the Excellence Centre for Geothermal Energy (CEGL) in Larderello, Tuscany. “Used without due precautions, it can run out.”

Sourcing geothermal power involves tapping the heat of the earth in places like Tuscany, where energy from the depths of the planet rises quickly to the surface, warming the soil and the water tables. The geologists believe that CEGL could certainly help Serbia, since Tuscany boasts a century of experience with this technology.

As early as 1904, the first geothermal lights were switched on in Larderello, a village of 850 inhabitants in the province of Pisa. Geothermal sources – concentrated in the Tuscan provinces of Siena, Pisa, and Grosseto – produce over 25 percent of the electric energy consumed in Tuscany. The region comes in fifth in the world - after the United States, the Philippines, Indonesia, and Mexico - among the top producers of electric energy from geothermal sources.

In Serbia, the interest in the hydro-geologic field emerged with the energy crisis of the '70's, but the last two decades have not seen further research or investments, despite the high potential.

So far, Serbia has exploited hot springs for therapeutic or recreational uses, explains Mica Martinović, a professor in the Faculty of Mineral Resources and Energy at Belgrade University. “Basically, we use geothermal resources like ancient Romans did,” Martinović explains. “Archaeological findings show that the best known thermal baths nowadays – Vranjska Banja, Niška Banja, Vrnjačka Banja, and Gamzigradska Banja – had the same functions centuries ago.”

Today, there are 59 baths, sports facilities, and tourist centres in Serbia. Thermal waters are also bottled by nine mineral water companies, while direct use of geothermal energy for heating and energy production is much less significant than it could be. “It is hard to compute percentages related to the use of geothermal resources in our country,” continues Professor Martinović. “Broadly, (current use) can be estimated at between eight to ten percent of total potential.”

The most important current projects, explains the professor, involve the thermal baths in Vranjska, Mačva, the Bogatić area, and in Vojvodina. “At the end of June, about 20 geothermal wells in Vojvodina, currently owned by Nis-Gas Oil [the Russian Gazprom], will be sold,” Martinović explains. “As for the use of heat pumps for heating offices, there are a dozen projects in progress in Belgrade.”

According to Martinović, cooperation with experts from Tuscany is possible on several fronts, including the capitalisation of geothermal resources, their possible applications, awareness-raising within ministries and the local public, the transfer of technological know-how, etcetera.

“CoSviG believed in this challenge from the start and committed to a networking effort that led to this agreement in order to explore the possibility of creating a consortium of municipalities, as happened in Tuscany twenty years ago, and to learn to make the most of the territory without selling out,” Loredana Torsello says.

Last February in Siena there was an international workshop aimed at formally gathering representatives from the territories of Southern Serbia - including the districts of Jablanica and Pcjnia - and the stakeholders of the geothermal sector in Tuscany. Participants included Goran Jović (president of the Chamber of Commerce and Regional Industry in Leskovac), Dragoljub Živković (director of the Regional Centre for Energy Efficiency in Niš), Jonuz Tefik Musliu (president of the Municipal Assembly in Bujanovac), and Slobodan Drasković (president of the municipality of Medveđa).

This program formed to establish dialogue between territories with similar geologic features may become an interesting case study of decentralised cooperation. The Tuscany-Serbia cooperation program has a wide range of goals including capacity building in local administrations as well as local development and the production of clean energy. The clean energy element is an especially crucial one in Serbia where 70 percent of energy production comes from highly polluting coal mines.