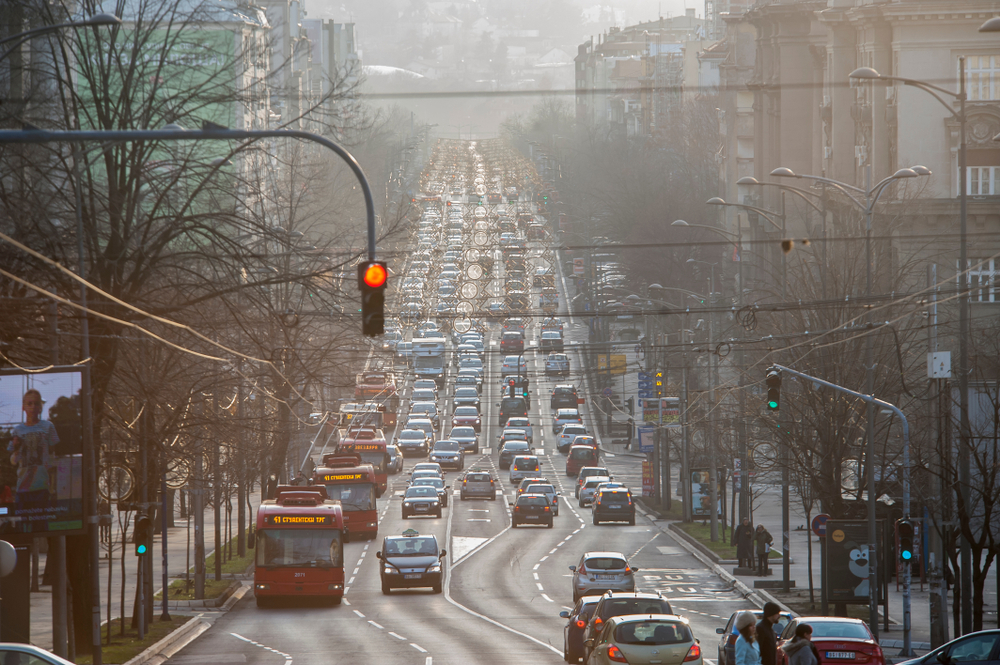 Eko Straza is one of the civic initiatives that with activism and protests across the country has contributed most to bringing environmental issues to the centre of public and political debate in Serbia. We interviewed Stanislav Vuckovic, an activist of the group

What is the idea behind Eko Straza?

Eko Straza  was created four years ago. The trigger was the bad situation of air pollution in Belgrade, which could be noticed by the pure smell of the air, especially during winter. At the beginning our activity focused on sharing information about air pollution in Belgrade through our Facebook page; then, as more and more people joined the initiative, we expanded the focus from the capital to the entire country. After some time, besides information sharing, we started to organise some in-person activities, mostly protests, cleaning up of illegal dumps, or collection of garbage. As for the protests, we usually organise them during winter, when the situation is worse and it is easier to motivate people to go on the street.

Why did you decide to focus on air pollution?

We decided to focus on air pollution because it is the most immediate threat that needs to be handled as soon as possible. Some estimates show that around 10,000 people a year prematurely die as a consequence of the prolonged exposure to air pollution. Many people do not take the matter seriously, but the toxins that we breathe can exacerbate pre existing illnesses and have dramatic consequences. Just because air pollution does not kill people on the spot it does not mean that it is not dangerous.

What is the current situation of air quality in Serbia?

During the heating season - from mid October to mid April - every city, especially those located in between mountains or hills, have an air quality of third or sometimes fourth category, which means very to extremely polluted. Outside the heating season and during summer there are bad episodes of air pollution which are mostly linked to illegal dumps or dumps that are not correctly managed that cause spontaneous fires with toxic fumes.

What do you think are the main achievements of Eko Straza? 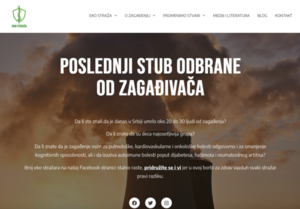 Before Eko Straza started to raise awareness about it, air pollution was not even considered a problem in Serbia, and nobody talked about it, not even the media. On the contrary, today not only air pollution, but environmental protection in general is regarded almost as a primary political issue. Since the beginning, we have been talking about this and other environmental issues, such as mining or river pollution, every day. So from a non-existent issue, thanks to our activism air pollution and environmental protection have become central topics in the political debate. That is what Eko Straza managed to achieve.

What is the profile of  Eko Straza’s activists?

There is a group of around 20 people that is the core of the initiative. These people are all volunteers and dedicate quite a lot of their time to Eko Straza’s activities. The majority of our activists are parents, who are worried about their own and their children’s health. They are well-educated and mostly come from urban areas. There are fewer people from villages or small towns, but they are not very active. In villages people somehow think that they live in a healthier environment and they are not exposed to pollution. In fact, air pollution is less apparent to them because official measuring stations are installed only in cities, and if you want to measure pollution, you have to buy your own device, which many people cannot afford. So probably they are less active because they are also less aware of the problem; they think that they live in some kind of bubble.

How do you reach out to people in peripheral areas to make them more aware of the problem?

We asked our public broadcaster to broadcast information about air pollution during the main evening news: depending on their location, people would see in a corner of their screen some information about pollution. We are happy because our request was accepted, even though it is not implemented in a satisfactory way because the broadcasters do not pay enough attention to this information.

You mentioned that official monitoring stations are located in urban areas, so they do not cover the entire territory. Do you know if there are any plans by the authorities to establish new ones in peripheral areas?

No, I don’t think there are any plans, and, if there are, the authorities are not serious about implementing them. Authorities are always trying to cover up the issue and find excuses to explain why we have polluted air. There was an officer in the Serbian Environmental Protection Agency who advocated for more monitoring stations and more transparency regarding information on air pollution and he was fired. The government is trying to cover up as much as possible, otherwise they would have to spend a lot of money on something that they do not care about.

As for monitoring, many people have their own portable measurement device. There are a couple of websites where you can find information about air pollution depending on where you are and some devices can be connected to these websites.

The problem is that people are often unaware and they do not know where to look to get information about pollution.

How do institutions tackle the problem of air pollution? What is their response to the activism of civic initiatives like Eko Straza?

Addressing the problem of air pollution requires a big amount of investment. To do it, the government would need to divert funds from other sectors and invest them in projects on air quality, but it is obvious that institutions are not interested in doing it: this is why they are trying to cover up the problem and to manipulate the people by saying “do you want your jobs or do you want clean air?”. We make our requests, but they are falling on deaf ears. That’s their approach. This is why it is paramount for us to inform more and more people about the seriousness of the problem.

What about the role of the media? Do they pay attention to and report on the problem?

As I said, environmental pollution is a political problem and as such, politics is mingling into it. So depending on the political stance, the media will report or not on air pollution. Unfortunately this is the situation. There are some media that are not under the control of the government or that do not support it that report pretty frequently on air quality; they also quote some of our statements and give us some space.

What do you think are good practices for civic initiatives such as Eko Straza to deal with air pollution and environmental protection in general?

The most important thing is to reach as many people as possible. The best way to do that is to use social media such as Facebook, Twitter, and Instagram in a smart way to capture people’s attention. That is crucial. Then, once you get their attention and you make them aware, it is important to involve them in various in-person activities, such as protests, garbage collection etc.. In this way they have the chance to know each other and build a stronger bond. Of course you also need to get media attention, and I would say that protests are again the best means to do that.

Serbia is a candidate country for EU accession, what do you think about the role of the European Union in supporting environmental protection in the country?

I think there is not enough pressure from the European Union on our government. The EU is financing some projects on air pollution, but they are on a small scale and won’t be able to have a significant impact on the quality of air. They put some pressure when it comes to the thermal power plants because these infrastructures release sulfur dioxide that pollutes not only our country, but also large parts of the EU.

From my experience, I have the perception that the Green Agenda is the last priority in the relationship between Serbia and the EU. I think that the EU should focus more on environmental issues and put more pressure on the government to deal with them in a serious way. I believe that this would also help boost EU popularity among the population, which is not really high at the moment.

Do you think that the current energy crisis will also have an impact on air pollution or on the green agenda?

Yes, I do. I'm worried about what will happen this winter. Already in previous years people who didn't have much money would burn highly polluting materials of low quality. Now with energy prices going up, coal prices going up... they are going to use energy items of even lower quality. The situation is not looking good.

"Climate change, environmental risk and social mobilisation in the Balkans" is a project co-financed by the Ministry of Foreign Affairs and International Cooperation (MAECI). MAECI is in no way responsible for the information or points of view expressed in the framework of the project. The responsibility for the contents lies solely with OBC Transeuropa. Visit the project page