Northern Macedonia, risk of low turnout for the presidential elections 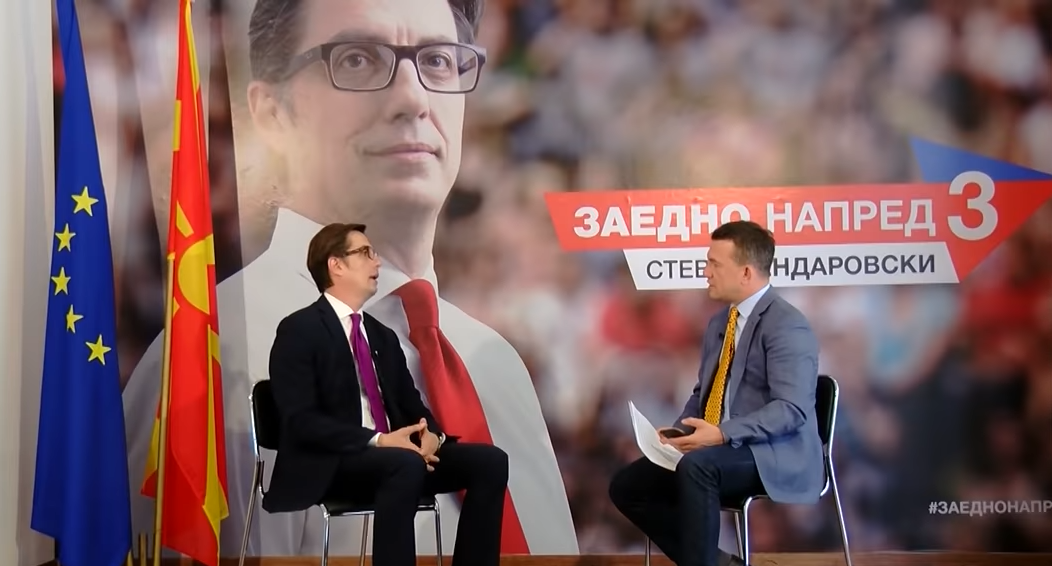 One of the two candidates who will compete on the ballot, Stevo Pendarovski, of the Social-Democrats (frame taken from an interview carried out by televisizioni7.com)

The second round of the presidential elections in Northern Macedonia will see competing Stevo Pendarovski, supported by the Social Democrats, and Gordana Siljanovska-Davkova, supported by VMRO. The uncertain electoral race, however, will likely be affected by low voter turnout

Stevo Pendarovski and Gordana Siljanovska-Davkova won the majority of votes in the first round of the presidential elections held on April 21st in the Republic of North Macedonia. Pendarovski, supported by the ruling coalition of SDSM and DUI, collected 42.84% of votes (323,714), whilst Siljanovska-Davkova, supported by opposition party VMRO-DPMNE, followed closely with 42.24% (319,225).

The third candidate, the ethnic Albanian academic Blerim Reka (independent, but supported by the Alliance for Albanians and the BESA movement) won only 10.58% (79,921), but his votes will most probably decide who will be the new President. This, of course, if at least 40% of the voters show up in the polls in the second round – the legal threshold for the elections to be considered legitimate. In the first round the turnout was a mere 41.79%, i.e. 755,702 voters.

In such a tied race, the threshold is another issue that concerns the stakeholders. So far, considering only the presidential elections, this was the lowest turnout ever registered. Therefore, experts and politicians are advocating for lowering or removing the threshold. Another option advocated by some is for the future president to be elected by the parliament. However, for possible solutions to be even considered in the future, the present elections need to be successful first.

Although throughout the campaign all three main candidates advertised themselves as independent and non-partisan, reality is slightly different. Pendarovski, Siljanovska-Davkova, and Reka are not party members, but their candidacies are clearly sponsored by the major political parties. It would be a huge plus for society if a truly independent candidate, without a party machinery behind them, managed to end up in the second round of the elections. Yet, at the moment, the “independent narrative” is just a strategy.

After a series of tough political compromises both in foreign – Prespa agreement with Greece, “good neighbour” agreement with Bulgaria – and domestic politics, spiced up with a series of unpopular and dubious political bargains in order to push through the Assembly the constitutional changes envisioned in the Prespa agreement, it is understandable why the SDSM supported an “independent” candidate. Although officially not a member of SDSM, Pendarovski holds a political function in the actual government as a national coordinator for NATO accession. The junior coalition partner DUI, an ethnic Albanian party, also supported Pendarovski.

The same goes with the VMRO-DPMNE. The memories of the former Prime Minister Nikola Gruevski's wrongdoings, still fresh, would have been a heavy burden for any party candidate in the presidential campaign. Therefore, VMRO-DPMNE chose Siljanovska-Davkova, a university professor in constitutional law and political systems. Judging by the first round, the maneuver was on spot, as she delivered surprisingly good results for the main opposition party.

The third candidate, Blerim Reka, was also supported by two ethnic Albanian opposition parties as part of a powerplay inside the ethnic Albanian political spectrum. Namely, following DUI’s support of Pendarovski, the two smaller parties, Alliance for Albanians and Besa, ran with Reka in order to establish themselves as the country's only genuine ethnic Albanian parties. Despite the limited chances of winning, Reka’s votes could be crucial in the second round.

Therefore, all three independent candidacies were product of the political constellations, maneuvers, and simple math – how to maximise chances for winning – rather than genuine grassroots activism or will for political change.

The overall process in the first round was described by international observers as well-run, peaceful, orderly, and transparent. Considering the previous elections, this were truly “boring” elections. This is of immense importance, considering that in the following months North Macedonia expects to receive a date for starting the EU accession negotiations. Having peaceful, orderly, and transparent elections is as important as successfully electing a president.

The campaign was and remains also quite positive, with a limited number of negative spots. Overall, it is a good thing that the atmosphere of a “life or death” choice is not so widespread during these elections.

The two candidates' campaigns have been predictable. Pendarovski advocates for a speedy NATO and EU association. On the other hand, Siljanovska-Davkova focuses on rule of law, justice, and putting an end to “the new corrupt elite”. She also argues that electing a woman as a president for the first time will be a proof of the democratic capacity and credibility of Macedonian politics. “This is the era of women: smart, critical thinking, inspirational, and creative women”, Siljanovska-Davkova said.

Even the counternarratives were predictable. Pendarovski attacked Siljanovska-Davkova for being not too critical during Gruevski’s ruling, while Siljanovska-Davkova attacked Pendarovski for changing his mind regarding the Prespa agreement. In the runoff, they both focused on Reka’s votes by portraying themselves as a true and genuine choice for ethnic Albanians, while depicting the opponent as bad choice for them.

On the election night following the first round, one could easily notice the disappointment of SDSM representatives. SDSM and Pendarovski, supported by DUI, expected significant advantage over VMRO-DPMNE's candidate. Prime Minister Zoran Zaev, faced with disaster, ran for cover by promising a government reshuffle right after the elections.

“Citizens decided to abstain and send the government a message of dissatisfaction; if they gave up their support, they would vote for the opposition candidate Siljanovska – Davkova”, Zaev said, adding that “dissatisfied voters have definitely signalled their disappointment with certain government officials and policies and that must be changed, both in the policies and in part of the officials”.

On the other hand, the VMRO-DPMNE was overly pleased with the result. With a stained reputation, honorary president Nikola Gruevski on the run in Budapest, and a number of court procedures against former officials, the result established new party leader Hristijan Mickoski as a serious player inside the party.

With all this in mind, Pendarovski should remain favourite. Regardless of the low turnout in the areas where DUI is a key political player, the SDSM candidate has a larger pool of votes. Most of the undecided and abstaining voters will vote for him, but the political bargains behind closed doors are at full speed, and VMRO-DPMNE, as most political actors in the country, is skillful in such games.

The media report that, although the two Albanian opposition parties supporting Reka mantain that there will be no trades, they are open for cooperation and are waiting for an offer by the government or opposition regarding their support in the second round.