Democracy in Macedonia: The Crying Game

Carnivals in Macedonia: Between Paganism and Modernity 31/03/2006 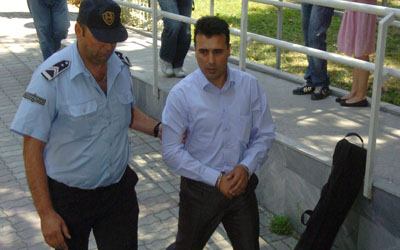 On 17 July Mr. Zaev, vice president of the Macedonian social democrats (SDSM) was brought to the Court in Skopje, charged with abuse of office. SDSM and VMRO exchanged accusations: SDSM accused VMRO of dictatorship, VMRO in turn accused SDSM of interfering with the work of judiciary

On Saturday, July 26, the freshly elected Macedonian Parliament will convene to approve the new government composed by the two winners in the recent snap vote, Macedonian VMRO and the Albanian Democratic Union of Integration (DUI).

But alas, VMRO and DUI will have to go to the party alone. The major opposition parties, Macedonian social democrats (SDSM) and the Democratic Party of the Albanians (DPA) have both already left Parliament.

DPA announced its withdrawal a few weeks ago when it became clear it won't make it into the government. SDSM just announced its boycott the other day in sign of protest against the arrest of their vice president and mayor of Strumica, Zoran Zaev.

On 17 July before noon Mr. Zaev was brought to the Court in Skopje together with five of his associates from Strumica. All of them handcuffed, including the middle-age female clerks. The TV crews were already waiting. Someone as usual, has tipped them off. Mr. Zaev and his associates have been charged with abuse of office in connection with the construction of the new, modern trade center in Strumica, opened earlier this year.

Mr. Zaev's is merely the last in the series of spectacular TV busts which have happened during the mandate of the previous government of Prime Minister Nikola Gruevski.

At the word of their vice president's arrest, the entire SDSM leadership, together with several hundred supporters gathered in protest in front of the Court. Riot police were already in place. The social democrats engaged in some pushing with the police and demanded the release of their colleague. After a few hours, things quieted down. Late into the night, after 12 hours of interrogation, the judge released Mr. Zaev and his associates to defend themselves from freedom.

The detainees returned to Strumica and Mr. Zaev was given a hero's welcome. The crowd carried him; tears of joy replaced the tears of despair from earlier that day; a Roma brass band was summoned to the social democrats' head office in Strumica to make the joy even greater. Democracy won, said the social democrats.

The next day, their president Radmila Sekerinska announced they were leaving Parliament.

Protesting in front of the Court, former Prime Minister Vlado Buckovski, said the scene made him feel like vomiting. "This arrest has a political pretext and it will have serious political consequences", said he.

Mr. Buckovski suffered the identical scene some months back. He was charged with abuse of office from the time when he served as Defense Minister, and was given the same TV-arrest. His party colleagues reacted in the same way too. They gathered in front of the Court and demanded his release. Mr. Buckovski, whose trial is currently underway, was allowed to defend himself from freedom. Some of the other indictees have spent some time in detention.

"The incoming government of Nikola Gruevski is continuing with the practice of intimidation, said Mr. Buckovski.

Over the next few days SDSM and VMRO continued with mutual accusations. SDSM accused VMRO of dictatorship, persecution of political opponents, and abuse of human rights, the presumption of innocence in particular. VMRO in turn accused SDSM of interfering with the work of judiciary, and trying to intimidate judges, and cynically suggested to pass legislation to pardon all social democrats who have committed any crime.

The truth is as usual somewhere in between. SDSM is interfering with what is essentially a criminal investigation, and trying to cause a political crisis in just a few weeks after they suffered their worst electoral defeat in their existence. What happens if it turns out that Mr. Zaev is really guilty, asked some analysts?

"If they stay out of Parliament, and then it turns out Mr. Zaev is guilty, they risk of appearing as having pressured the judiciary", comments professor Jovan Donev from the Eurobalkan Institute.
It is also true however that the spectacular TV arrests make people guilty before the trial has even begun. Even if acquitted later on, these people will remain labeled and their careers will suffer.

"TV justice has nothing to do with the fight against corruption and crime, nor with the respect of the presumption of innocence", said Saso Ordanovski from Transparency Macedonia, a government watchdog. "This party - police circus has gone too far and we have been warning that it is out of democratic control", Mr. Ordanovski added.

Many commentators concluded that SDSM can not revolt against the fact that charges have been brought against one of their own, but it is right to protest the way it is done in.

The Helsinki Committee for Human Rights also warned the government against the violation of the presumption of innocence done by widely televized arrests.

On the other hand, comments arrived from allover criticizing the social democrats' decision to leave Parliament.

"People elected them, and are paying them to sit there", said professor George Ivanov from the Law Faculty.

The European Commission also called upon the opposition to return to Parliament so the country could keep on course with reforms.

Yet, SDSM had a meeting a few days after the initial decision, and said they were not coming back. On the meeting of their executive board, which took place in Strumica as Mr. Zaev is under court order not to leave town, SDSM stood on their decision.

" If perhaps last week some of us had some doubts whether we had gone too far, we are now convinced we did right", said SDSM president Sekerinska.

VMRO does not want a democratic dialogue, they might as well continue to work alone, commented Ms. Sekerinska.

Democratic tradition requires a consensus of political factors on adopting the Statute, and the EU demanded the same thing from Macedonia as a benchmark for opening negotiations. Both the EU and the US expressed disappointment over the fact that the opposition was not consulted on the issue.

The new government, with powerful majority in Parliament will be inaugurated Saturday. Democracy continues - the Macedonian way.

Both sides should reconsider their act. The government efforts against corruption are commendable but media lynching is not justice. The opposition on the other hand should stop the crying game and act responsibly.