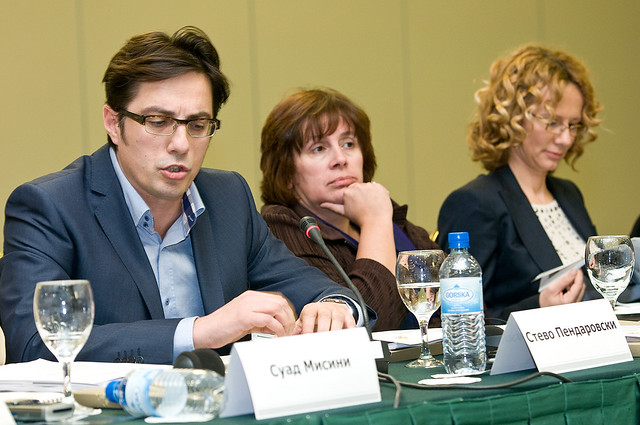 Social Democrat Stevo Pendarovski is the new president of North Macedonia. Despite the victory, however, Prime Minister Zaev announced a reshuffle to revive the reforms

Stevo Pendarovski is the fifth president of the Republic of North Macedonia. In his second attempt – in 2014, he had lost to then incumbent president Gjorge Ivanov – he defied his opponent, Gordana Siljanovska-Davkova.

“In accordance with Article 121 of the Electoral Code, Stevo Pendarovski has been elected President after receiving the majority of votes from the citizens who voted”, said State Election Commission (SEC) president Oliver Derkovski on Monday, May 6th.

In the runoff held on May 5th, Pendarovski – supported by the ruling coalition of SDSM and DUI, together with several small parties – collected 51.66% of votes (436,212), whilst Gordana Siljanovska-Davkova, supported by opposition party VMRO-DPMNE, obtained 44.73% (377,713).

Securing a majority was somehow an easier task for Pendarovski than reaching the needed 40% turnout. In the first round , the turnout was a mere 41.79%, i.e. 755,702 voters. Considering only the presidential elections, this was the lowest turnout ever registered. Therefore, in the second round, the main message of all contesting parties’ was to convince the electorate to show up at the polls. In the end, on Sunday, 844,360 out of 1,808,131 registered voters (46.70% ) cast their ballot at one of the 3,512 polling stations

According to international observers, the second round of the presidential election was calm and well run. However, it was noted that shortfalls in the legal framework remained a concern.

Just several hours after polling stations were closed and the initial results showed that the turnout had been reached, Pendarovski made his first appearance as President-elect stating that he will be the President of all citizens and work in their interest.

“I will be a head of state who you are not ashamed of”, said Pendarovski, adding that people decided “that we should move forward together”.

“Today we saw a proud country, a wise nation, a victory of the majority of citizens of North Macedonia, regardless of ethnic or political affiliation. Today the citizens won, and I will serve them humbly”, said Pendarovski.

On the other side, VMRO-DPMNE and Gordana Siljanovska-Davkova pointed out that they got more votes than in the first round. “In case of early parliamentary elections, VMRO-DPMNE will win the biggest number of MPs”, read the party statement. In a lengthy speech, Siljanovska-Davkova conceded defeat without openly congratulating Pendarovski on his victory.

“Numbers show a defeat. Usually, the defeated are upset, but I’ve never felt better, calmer, and more enlightened”, said Siljanovska-Davkova at a press conference at the party’s headquarters. “Results show that this government is losing its legitimacy. The option of early parliamentary elections should be considered seriously”, she said.

VMRO-DPMNE leader Hristijan Mickoski continued on the same tone. He said that Gordana Siljanovska-Davkova could lose only by falsification or electoral engineering. “Today we witnessed irregularities, blackmail, threats, pressure, and bribes. These are not European or Macedonian values”, Mickoski said.

On the other hand, domestic and international observers did not found significant irregularities. There were several cases of family voting or vote buying, but these did not influence the result.

“The election day was well prepared, smooth, and peaceful”, said Corien Jonker of the OSCE Office for Democratic Institutions and Human Rights (ODIHR). “But democracy is not just about Election Day. Political will is needed to ensure that genuinely inclusive legal reforms are followed by a consistent implementation that builds and keeps citizens’ trust”.

Marie-Christine Dalloz, Head of the Parliamentary Assembly of the Council of Europe (PACE) delegation, reaffirmed the ODIHR's findings, pointing out “that some recurrent problems in the electoral process remain unaddressed, in particular the need to reform the electoral code and, in general, the political system, to re-engage citizens, and to ensure their active participation regardless of ethnic origin”.

Following the successful second round, regional and local media reported on greetings from the neighbouring countries. Greece’s Alternate Foreign Minister Sia Anagnostopoulou tweeted that “North Macedonia ended its nationalistic past with VMRO. After the Prespa Agreement, our neighbours show that they are determined to move forward, breaking all the nationalist obstacles”.

NATO Secretary General Jens Stoltenberg tweeted that he is looking forward to work with Pendarovski “on welcoming North Macedonia as NATO’s 30th member”.

Also EU officials Jean-Claude Juncker and Donald Tusk congratulated Pendarovski, reaffirming the European Union’s unequivocal commitment to the European perspective of the Western Balkans. “As the accession process is merit-driven and based on thorough reform in each partner, we encourage you to pursue North Macedonia’s path of real and sustained reform. You can count on our absolute support for your efforts”, Juncker and Tusk said in the note.

The U.S. Department of State congratulated Pendarovski in a letter praising the elections as peaceful and competitive and acknowledging the outcome as representing the will of the people.

“The United States is a strong partner of North Macedonia. We look forward to working with President-elect Pendarovski, the government, and all political parties as North Macedonia prepares to become the 30th member of the NATO Alliance and advances its future in the EU”.

More important than the results are the lessons that political elite said they learned out of these election rounds, and one of the main issues that need to be tackled is the low turnout. One of the easiest fixes is to abolish the turnout threshold in the second round of the elections, as recommended by the Venice Commission and international observers. However, a more radical solution is needed. The electorate's passivity is the direct result of bad government by the previous elites and failed promises by the present one.

After the tie between Pendarovski and Siljanovska-Davkova in the first round, Prime Minister Zoran Zaev announced a government reshuffle. After successfully closing the Prespa Agreement, the government is out of excuses for not delivering on its promises of justice and prosperity – even more so now that the SDSM has controls the government, the vast majority of local municipalities, and the President's post.

“Today I start evaluations”, Zaev continued, “in collaboration with my closest associates, because this is my primary concern.” Officeholders will step down from positions within the Ministries, public enterprises, and state-owned stock companies, but also within SDSM, Zaev said. “We intend to do this as quickly as possible because it’s time to get down to work”, he added. “The country has a President, wind at its back, and what we have to do is change certain management structures, and certain officeholders who’ve shown weakness”.

Clearly, Zaev is out of excuses. If he does not deliver what he promised, then in 2020, on the next regular parliamentary elections, VMRO-DPMNE will probably win. However, the EU also needs to deliver; the country is still waiting for the promised date for the start of the negotiations. North Macedonia delivered good-neighbourly relations and European-standard elections. Now, it is time for the EU partners to deliver what they promised. Time is running out.